After breaking free and taking a much needed dip in the local swimming pool, Duke finds open traversal while completing this leg of the journey, which appears to be the heart of ROCH’s metropolis adventure. Taking place within a densely packed shopping district, Pascal continues edging his aesthetic and style ever closer toward realism, creating another authentic looking urban playground that etches a special place in the mapping scene for those who have imitated, adapted and learned from in the years beyond its initial release.

After players have trudged across eight levels with a clear direction, Pascal chooses to hand over the driving wheel and this time doesn’t point down any particular road. ROCH7 involves another change of pace for the series, opting for a non-linear adventure with only one singular goal of importance tying the level together; seek out a yellow key card to unlock the exit. To achieve this, four mandatory switches must be activated, each situated within zones locked behind four blue access panels. Should my maths prove correct that provides 24 possible routing variations to engage with on repeat sessions, implying slight differences for one player’s journey compared to another. These locations include a hotel room with a quaint diner round back; an appliance store inside the local shopping mall; a large performance hall with band instruments set up on stage; and a sleek wood and grey panelled office space. One notable component regarding the non-linearity has a small effect on weapon acquisition and supplies gathered, where speciality options are spread between buildings during normal progression. Grabbing a Devastator earlier on will make crowd control easier to manage when need for it arises, as opposed to snagging the Freezethrower instead, better suited to pick off singular targets and therefore expects a change in tactics once under those same circumstances. 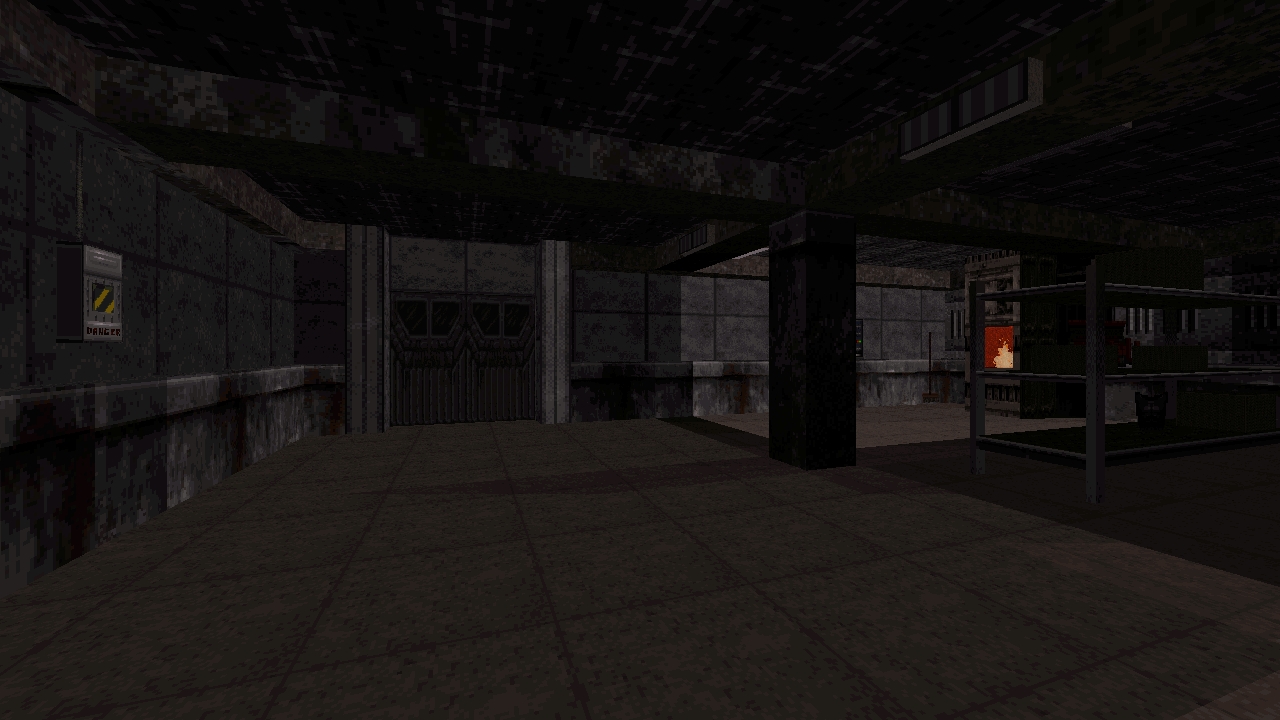 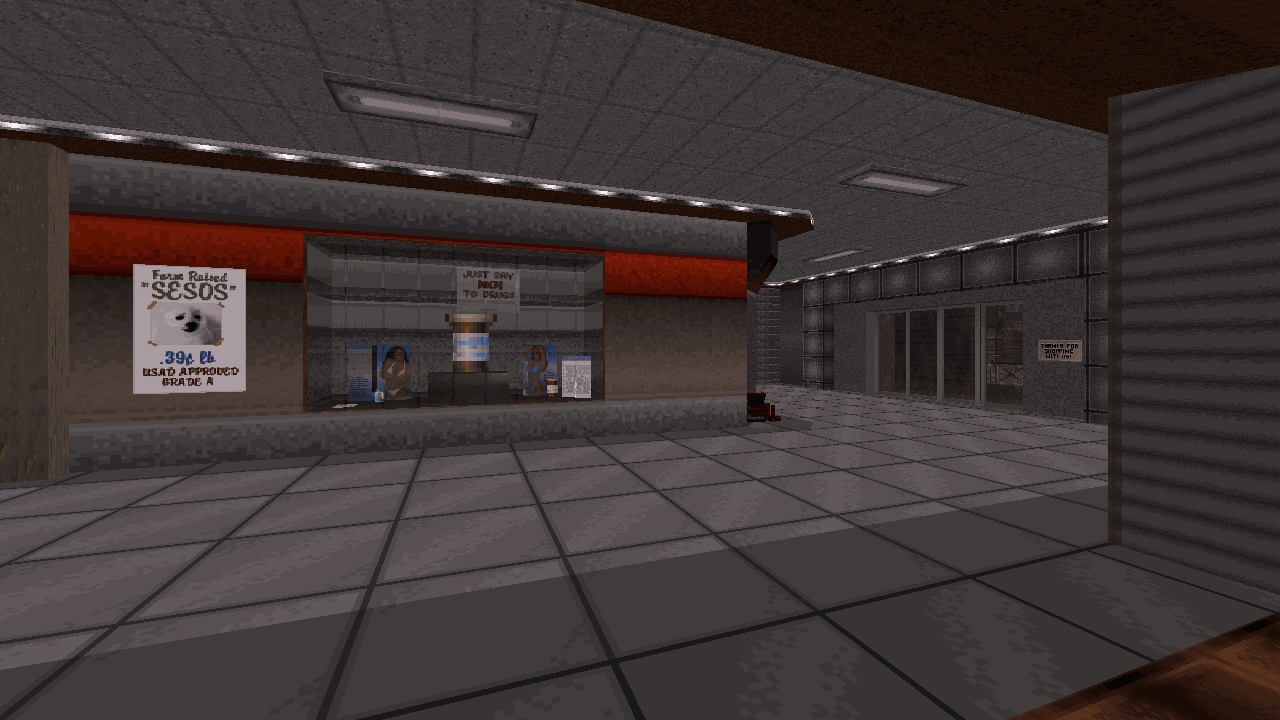 Apart from placing less restrictions for exploration, ROCH7 doesn’t stray far from its usual combat formula beside an occasional outlier, remaining a heavy handed string of skirmishes with firepower available to match. Enemies swarm the initial street section insisting on clean up duty before committing to any task. Patrol cars, Sentry Drones and Octabrains control the vertical space, as flanking positions attempt to distract allowing Troopers opportunities to hit their mark all while Pigcops and Enforcers close the distance to deal damage. This urges target prioritisation, using cover to break sight lines and keeping those legs moving. Ammunition balance always remains in the player’s favour, so long as enemies don’t make too many surprise attacks as they love lurking round corners and heavy hitters squatting in tight spaces. Health otherwise should never pose a problem as there’s enough atomic boosts to tip the edge, I’m surprised the city hasn’t become a radioactive wasteland yet. As milestones are achieved, new inhabitants move into town depending on which of the four switches are pulled. Skirmishes against the Battlelords work well around the hub, allowing good distance to be placed between them at the cost of their mortar rounds being a more effective counter. While the parked cars provide substantial cover to weave in and out, I’ve had one of their explosives bouncing across their rooftops right into my face a fair few times and the other brute climbing atop them, enough of a convincing argument to dip inside for safety. 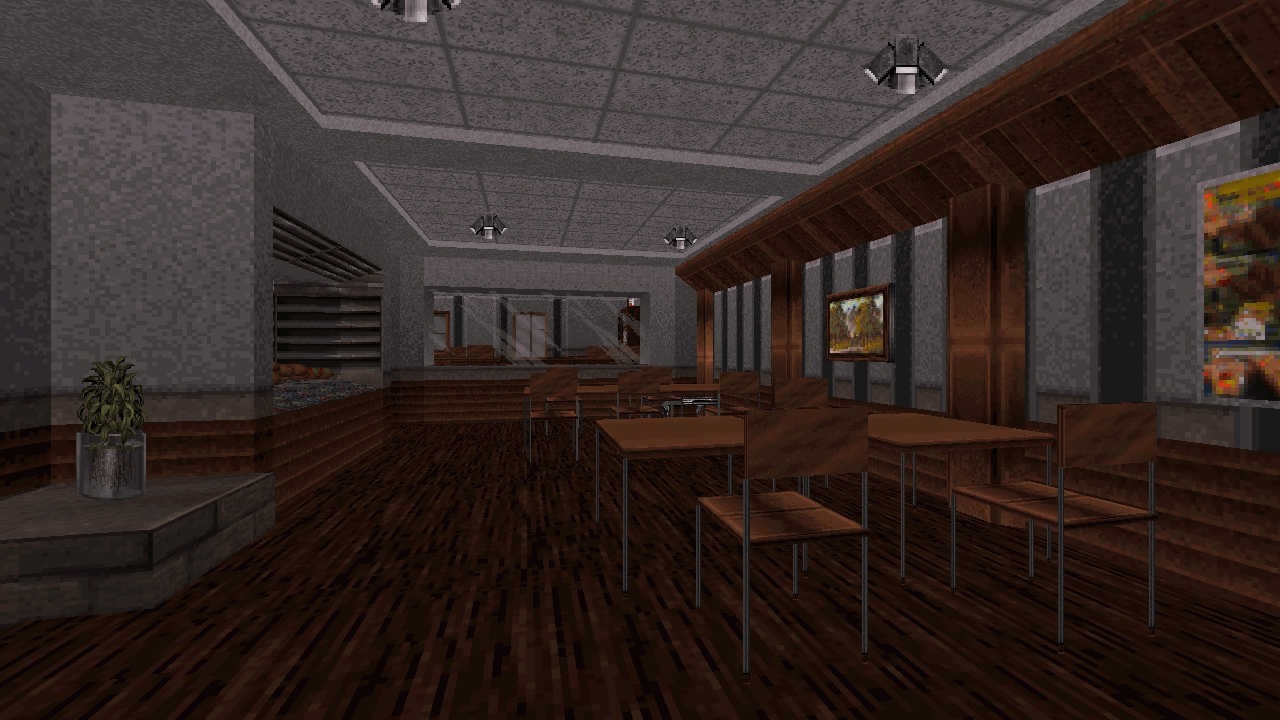 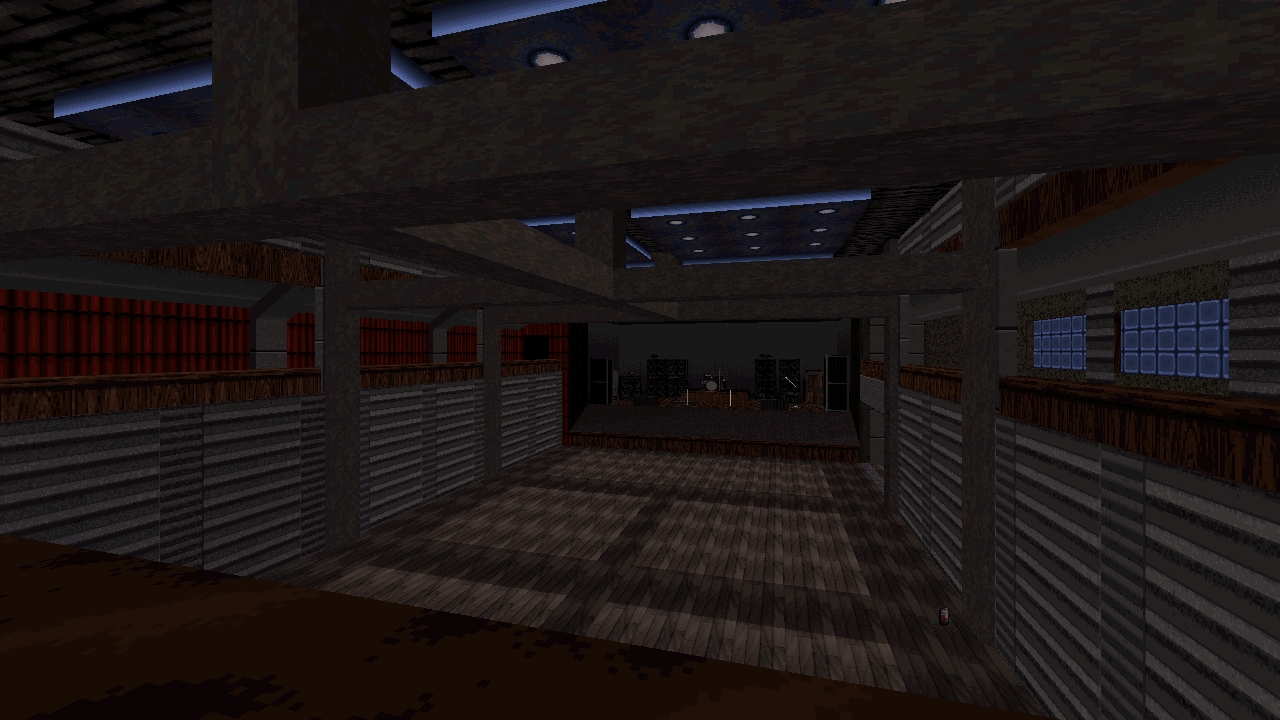 Construction and design continues to evolve, even from the beginning of ROCH there is an influence to mirror realistic buildings and attempting various architectural styles from modern to antique. Utilising a neutral colour palette that unifies the whole district, ROCH7 approaches a rustic appearance, structures that may have stood for decades converted to suit whatever is needed of them at the time. A string of buildings circle the central plaza which stages a dominating landmark, a neoclassical triumphal arch, while tucked on a nearby plateau sits an avant-garde display of cubes and spheres suggesting an art piece of pure simplicity. The ROCH series can be defined by this very nature; complex forms depicted via rich visual presentations and attention to details, held hand in hand with simpler, yet functional combat. On the other hand, while the occasional level may try something different, the series very much sticks to tradition for the most part. Pascal has always delivered at ensuring his levels are eye catching, developed and refined to be a recognisable style and in turn becoming an influence still seen even today. These works inspired by ROCH have then also gone on to be an influence in their own right, like falling dominoes bumping into the next, including but not limited to mappers such as Taivo Maripuu; the Oostrum brothers, Maarten and Merlijn; and fellow Frenchman Aymeric Nocus. These four even collaborated together for a tribute level titled ROCH ISLAND further showing how important these levels have become for a large part of the community. ROCH7, in a specific particularity over the other entries, became a major inspiration for many years during my earliest days tinkering in the editor. I would spend countless hours learning to recreate aspects that wowed me, from vehicles, spritework furniture, particular usage of textures, to anything of interest in hopes of learning something in the process. 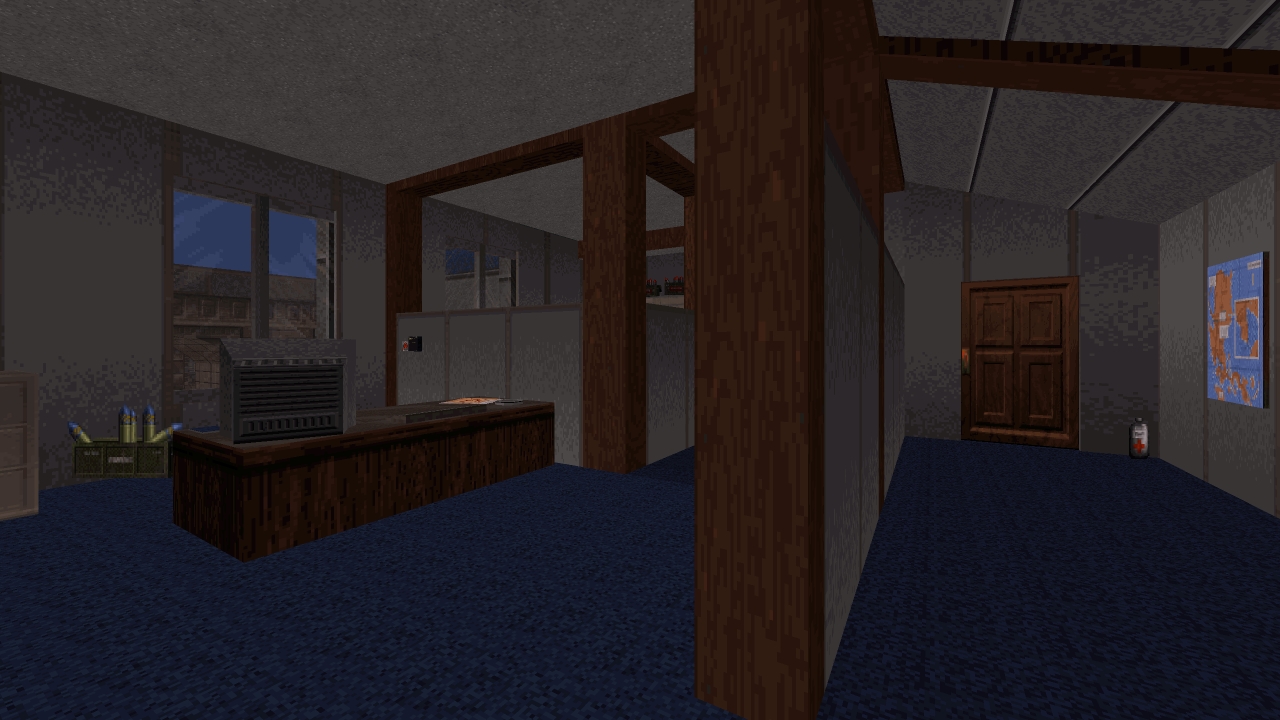 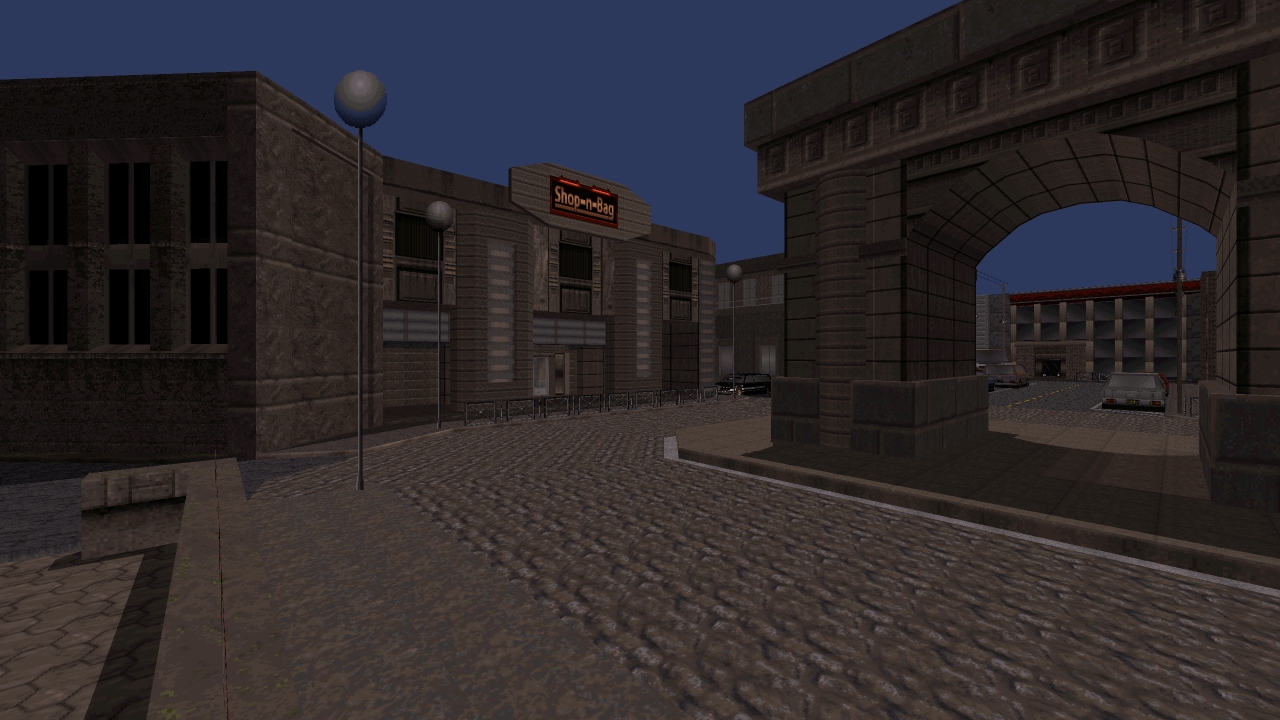 The performance hall section and lead up is without a doubt the strongest area, becoming its own distinct little corner of the map. There are diverse encounters in tight hallways and an open hall where platforms on the ceiling can be climbed onto, action allocated to shooting from across balconies or jumping to the lowest floor dealing with threats as they come. Even secret areas have been congested here. I prefer to save this section for last during my runs simply because it escalates and flows rhythmically toward the ending. The other three choices exist as these miniature vignettes that seem to be the start of something, but come to a screeching halt before contributing anything meaningful. It makes me wonder how things could have been different if this was created and released some years later when the maximum limitations were increased for newer iterations of the BUILD engine via JONOF PORT or EDUKE32. Alternatively I may even prefer seeing the performance hall extended if that meant losing partial non-linearity in favour of tightly focused gameplay from start to finish and this being a core section of the experience with a loose layout to make up for it. 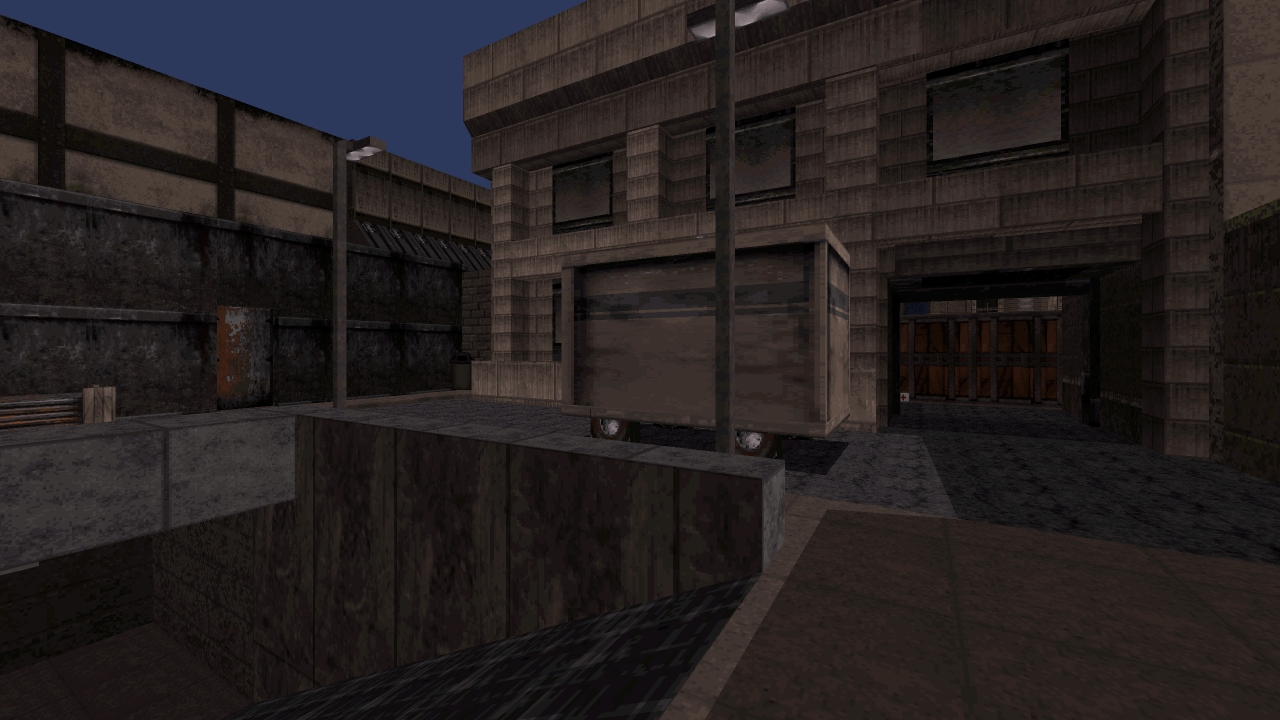 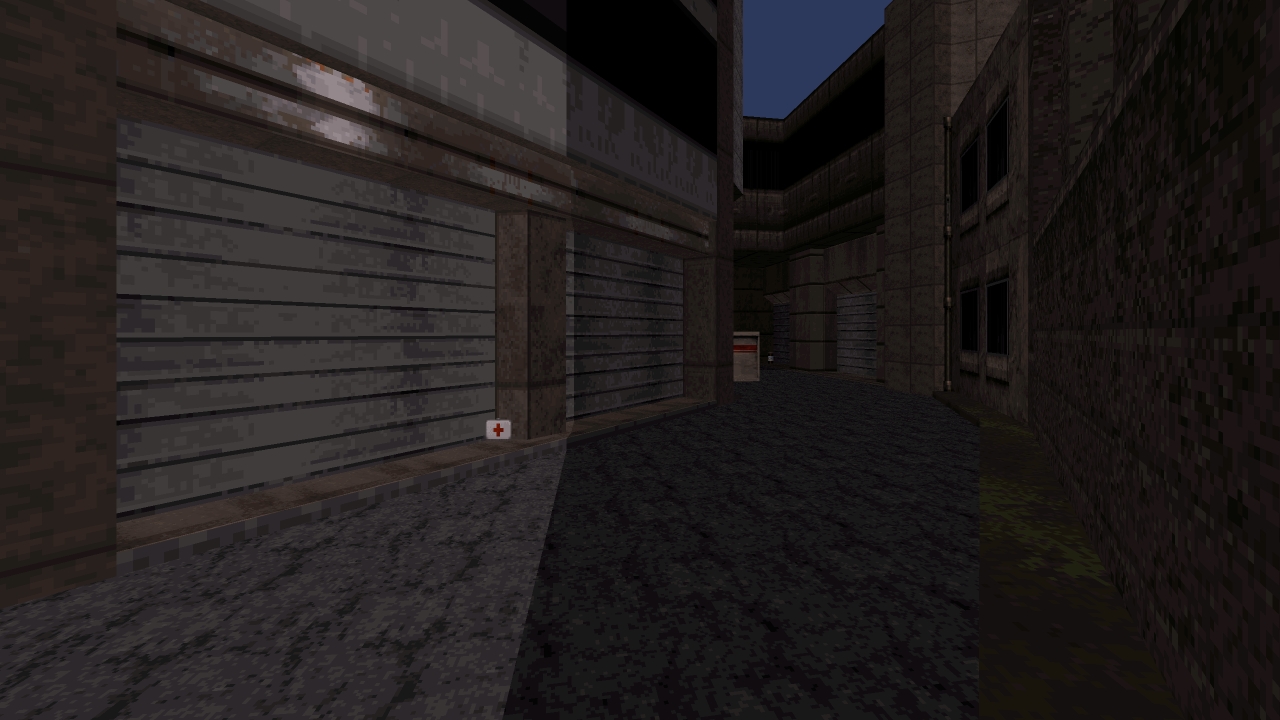 Examining ROCH7 from a different perspective nowadays after having more experience behind me reveals this entry does lack well established components integrated pretty well during ROCH6 and in retrospect the introduction to ROCH8. The prior level created an impressive sense of place, a unique setting carried by a narrative implied through a progressive journey to escape confinement and later revisiting locations with new vigour. The sequel otherwise starts with an instant call to action, a driven goal to bring the fight back to the aliens. ROCH7 otherwise accentuates just how much of a static backdrop everything really is by comparison, sticking to the core basics of gunning down aliens and nonchalantly admiring the sights. I appreciate how much of an influence this entry may have had on visual design, but still find it disappointing that it doesn’t even attempt to achieve similar heights for memorable events to play out or establishing any ounce of drama. Take any particular section to see how they simply exist to serve as a means for switches and key cards to be hidden within, throw in some close quarter fights and then little else of remarkable personality. One exception is the hotel where a hole between floors is blown wide open, allowing access onto the ground floor instead of relying on another doorway and sprinkles additional flavour to an otherwise monotone adventure. Perhaps the aliens could have rigged bombs around the district that will inevitably destroy historical buildings and monuments if Duke doesn’t do something to stop it. Switches could then be heavily guarded and serve as a means to defuse each one. In their last ditch effort having failed this initial objective, the events of ROCH8 can then play out as normal to make this more personal. Not that I typically need a purpose to play through custom Duke3D levels, but I do believe having narrative driven gameplay that gives purpose behind the actions taking place across the level can be an additional strength to the piece of work if there’s a place for it.

ROCH7 is another strong entry, gorgeous visuals and tons of cute aesthetic features that makes wandering its streets a treat for the eyes. Having more freedom to decide which buildings to tackle first add a lot to replay value but lost areas of significance beside the performance hall. After coming off the high points of ROCH6’s overall direction, intentionally restricted flow and implied narrative built across the journey, this entry ends up falling short by reverting back to familiar grounds from earlier levels in the series despite opting for non-linear routing opportunities.