With all this rushing around town working up a sweat, perhaps it’s time for a dip at the local swimming centre to cool off. Duke stumbles into an EDF laboratory under siege and test subjects released from incubation. Now every exit leading outside is under lockdown, escape is denied and the aliens definitely have something to do with it. The only option is to push forward until an opportunity reveals itself.

Breaking away from the usual rhythm where a new ROCH district can be freely roamed upon arrival, Pascal subverts this expectation by forcing players to remain indoors for some time, following a sequence of linear events before an escape outside is found. For a series with an otherwise iron grip on its established formula, this welcome change of pace now teases a very core element these levels are typically known to offer. Now this leisure must be earned. This isn’t just another romp through winding streets but instead an open hub walled off by surrounding buildings as a highway overpass barges through the zone. ROCH6 has been a consistent favourite of mine over the years, which has always stayed with me for its distinct setting alongside a subtle narrative to attain freedom driven primarily by how the level progresses from moment to moment. Starting from an EDF research facility, players are immediately treated like a trapped rat as their means of travel on foot is limited, left resorting to more inconvenient means of moving from point to point instead. These routes weave themselves through various properties bordering the central plaza, from crawling through ducts, scurrying beneath floorboards, some forgotten back alley and even squeezing down tight drainage tunnels. Duke is given no respect here. After small steps forward are taken certain locked windows will open up, pouring light into the room and revealing visage outside. These signs of freedom are but a momentary reward, ripped away as barricades slam down like prison bars to remind us of who’s in charge. Opportunities were still born from this predicament, a small change but while denying players exit, this too prevents enemies entry as well. Sniping off targets from these safe positions dotted around the level became an option I took full advantage of, saving any hassle later by chipping away at loitering troops. 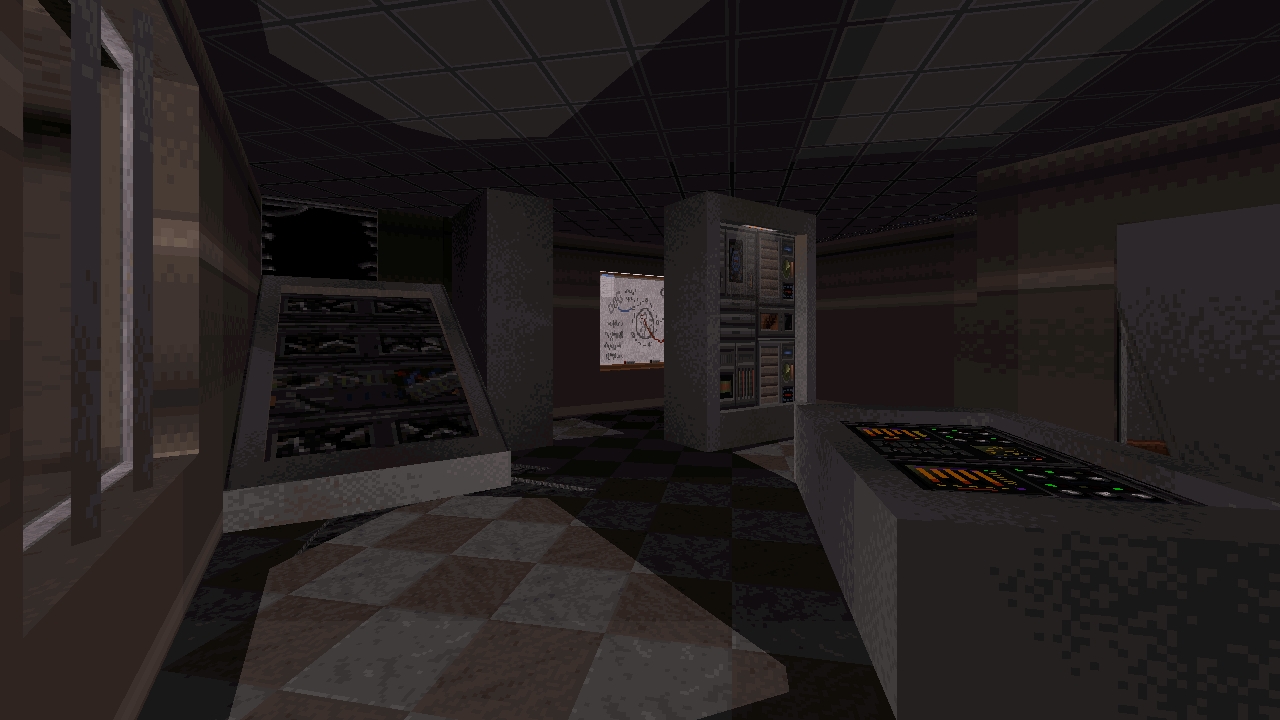 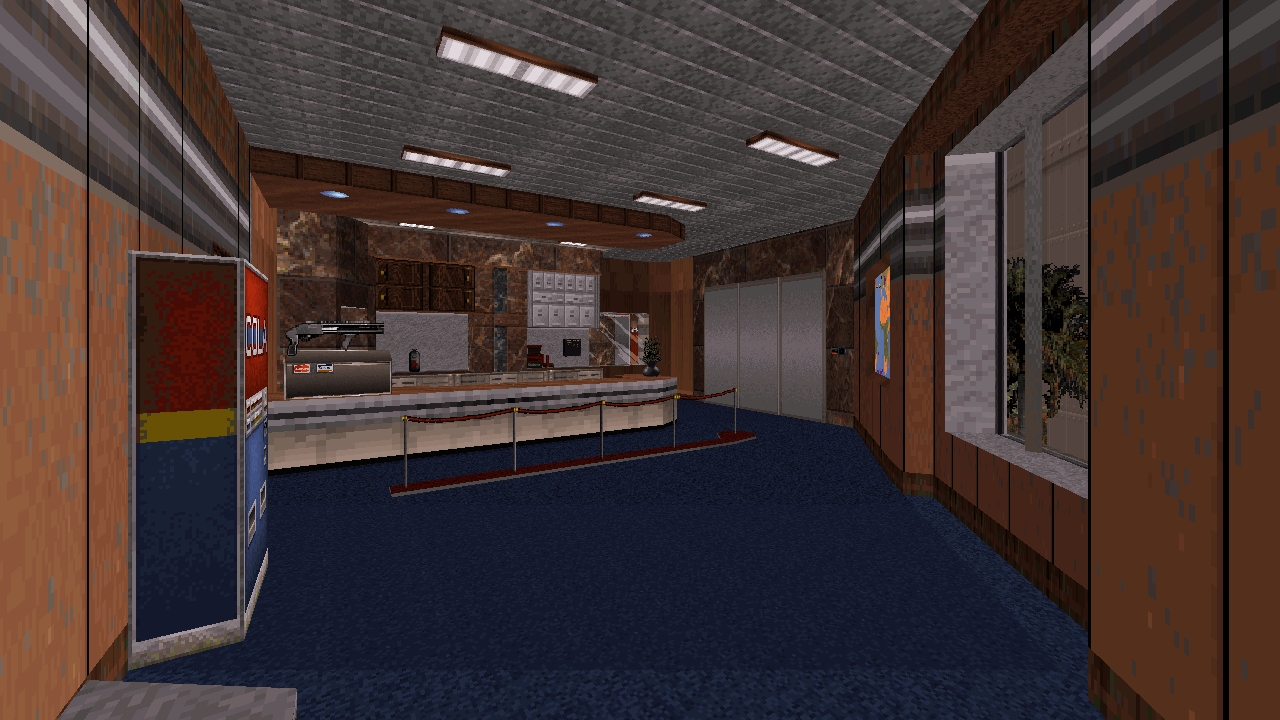 I adore Pascal’s confidant display at realising a particular scene at hand, opting for larger constructions on a scale which may be based on somewhere from the real world. This adaptation of all elements of visual design ensures ROCH6 stands out within its own universe. Take the actual road layout itself, utilising a specific style of road system not touched upon frequently for Duke3D, otherwise an easy to ignore feature because of its aesthetic purposes here, it still serves an important part of the overall picture being built here. Beginning by crawling out from an underpass and then climbing an uphill slope, diverting into two parallel one way roads, while adding some curvature before stopping at two separate parking bays. Both ends belonging to buildings requiring key card access as if these were arrows providing directions. Surface markings beyond the usual dashed line for traffic showcases an attention to detail that sells what I’m looking at as potentially existing in reality. Meanwhile, shadows swallow up large portions of space due to the looming bridge overhead, a notable split between two halves contrasting between light and shadow helps to nudge where progression should resume once reaching this milestone. Everything beneath the overpass is reliant on an ambient light, while sunshine puts the swimming hall and EDF laboratory portions under a beacon. This composition achieves a significant degree of realism this series has been working toward, a sense of place that could only exist because of stronger foundations on their own pulling more weight than any cumulative combination of smaller decorative elements could ever pull off together. It’s a series of constructions that define everything else surrounding them, a change of scenery that dares shake up the status quo of standardised urban themed levels even to this day. 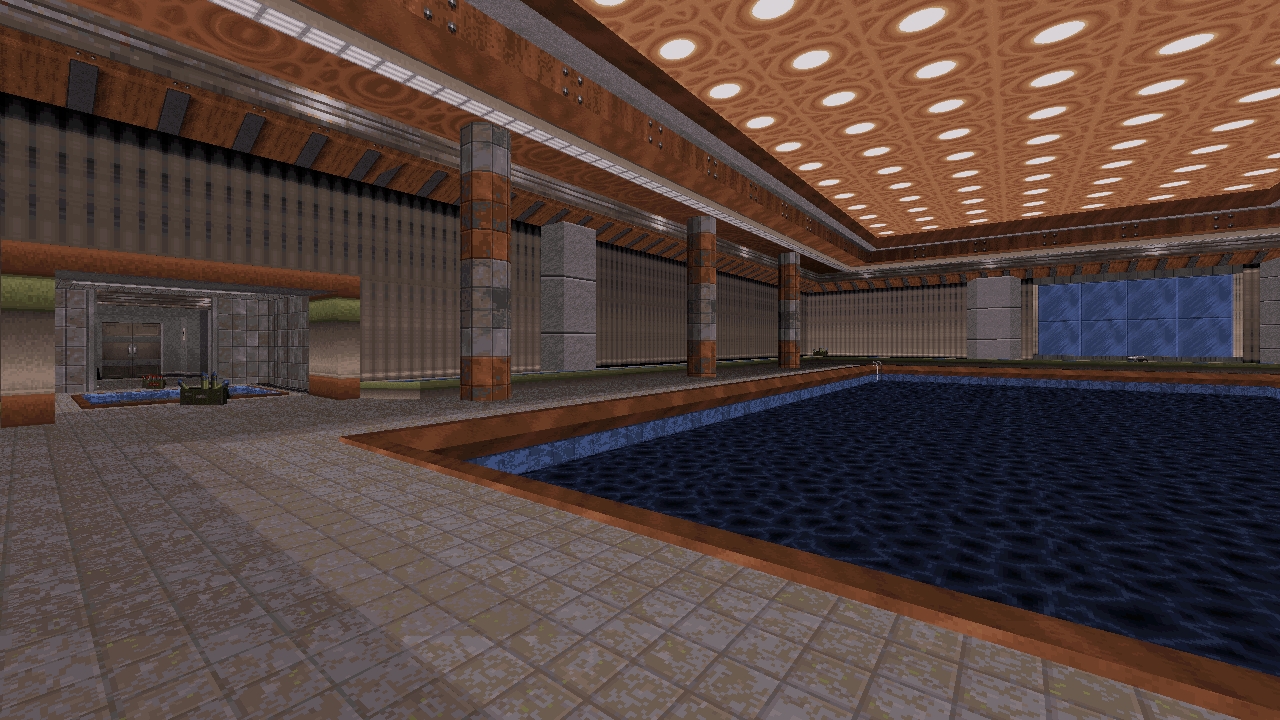 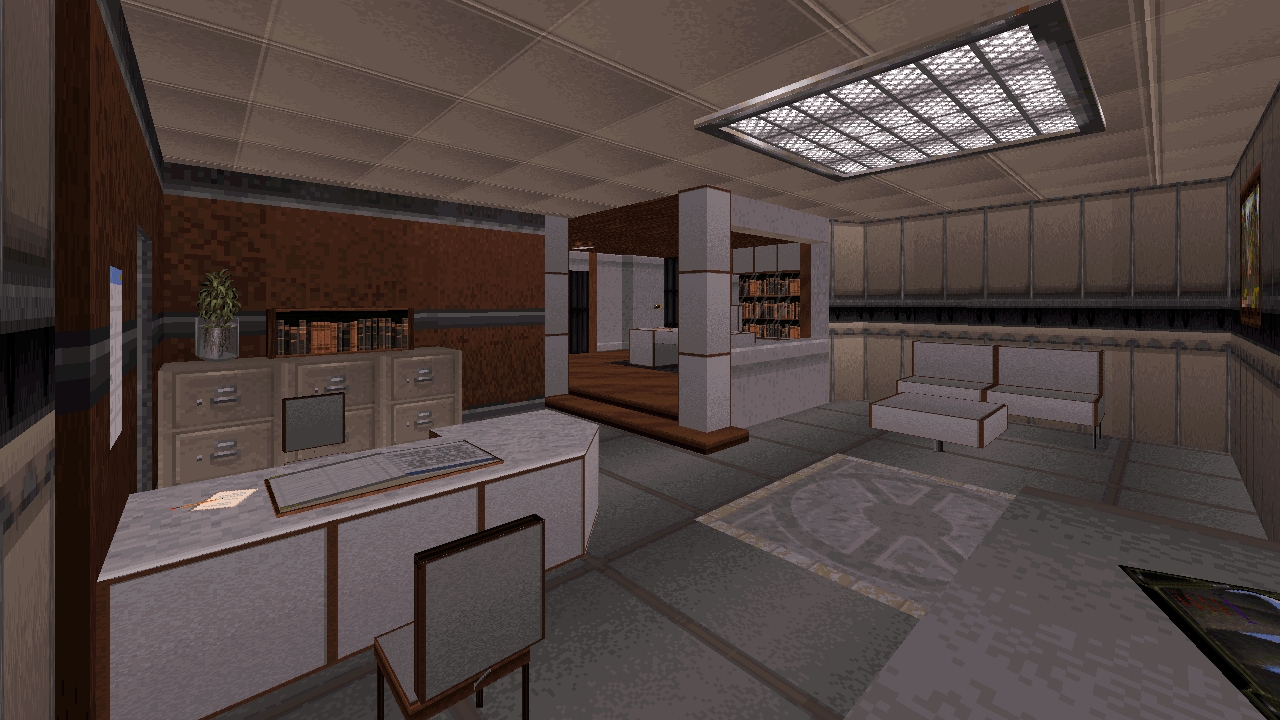 I do enjoy the contrast between light and shadow creating a split between two halves that further nudges where progression continues once setting foot under the blue sky. While beneath the overpass is reliant on ambient light, sunshine puts the swimming hall and EDF laboratory sides under a beacon suggesting to players where their main priorities will be. Revisiting these areas a second time with better gear on hand and access to locked sections makes for a nice sense of making headway relative to earlier circumstances. Combat does take a stride forward because of larger interior spaces, having a positive impact during fights that almost made me forget I was playing a ROCH level for a moment. Corner peeking is still a prominent strategy but having room to work with opened up options when tackling certain enemies. I could sidestep and duck from Commander rockets without constant worry for inevitable splash damage. Even milestone battles when the numbers heat up are located in suitable arenas like the swimming pool.

Out of the entire series, this one still holds up as my favourite without a doubt. The bridge overhead and fighting beneath its shadow are a memorable feature, a setting even to this day still feels unique. The two distinct halves of progression implies a narrative through the journey to get there and combat has varied situations based on previous actions, whether taking advantage of sniping down aliens from windows or leaving them alone to focus on finding an escape route.