ROCH is a series spanning multiple individual releases best known for Pascal’s distinctive urban design. This personal style soon found its way to influence others within the mapping communities, imitating and adapting these inspirations into their own works. ROCH became a cornerstone point of reference for well crafted city themed levels going forward. Even so, everyone had to start somewhere in their mapping careers and despite series fame, even its premier has a few rough edges.

ROCH1 begins on a deception first impression taking place inside this bare bones room, with nothing besides some explosive canisters against one wall just waiting to be shot and three viewscreens beckoning players toward them. These monitors provide a sneak peek what to expect, a novel staple of ROCH levels going forward to whet our appetites before getting to business. Upon leaving for the great outdoors after knocking down a wall, combat escalates into high gear without adhering to any standards of pacing. Alien combinations are varied and chaotic in nature, forcing players to make quick use of provided cover wherever possible in this condensed yard area while taking opportunities to grab an advantage before heading out into the streets proper. From then on, freedom to go exploring is granted as the situation mellows out where only pockets of aggressive forces stationed at many landmarks are worth worrying about. Enemy placement can often go against the player’s best interests, especially when up against Sentry Drones and Commanders holing up in tighter spaces, meaning potential explosions taken head one during close quarter encounters. On the other hand healing items and armour are a plentiful resource, with Atomic Health bonuses being handed out like free doughnuts for those curious enough to check anything suspicious. Being on the receiving end of damage wasn’t always a massive consequence as a result, simply dusting myself off to prepare for whatever comes next and moving forward. It’s easy to gather up a surplus of supplies treating the level as a playground for casual wanton destruction. All encounters are trivialised by its sheer amount of explosives and shrinker ammo alone, as if told is to just let loose and enjoy the carnage. 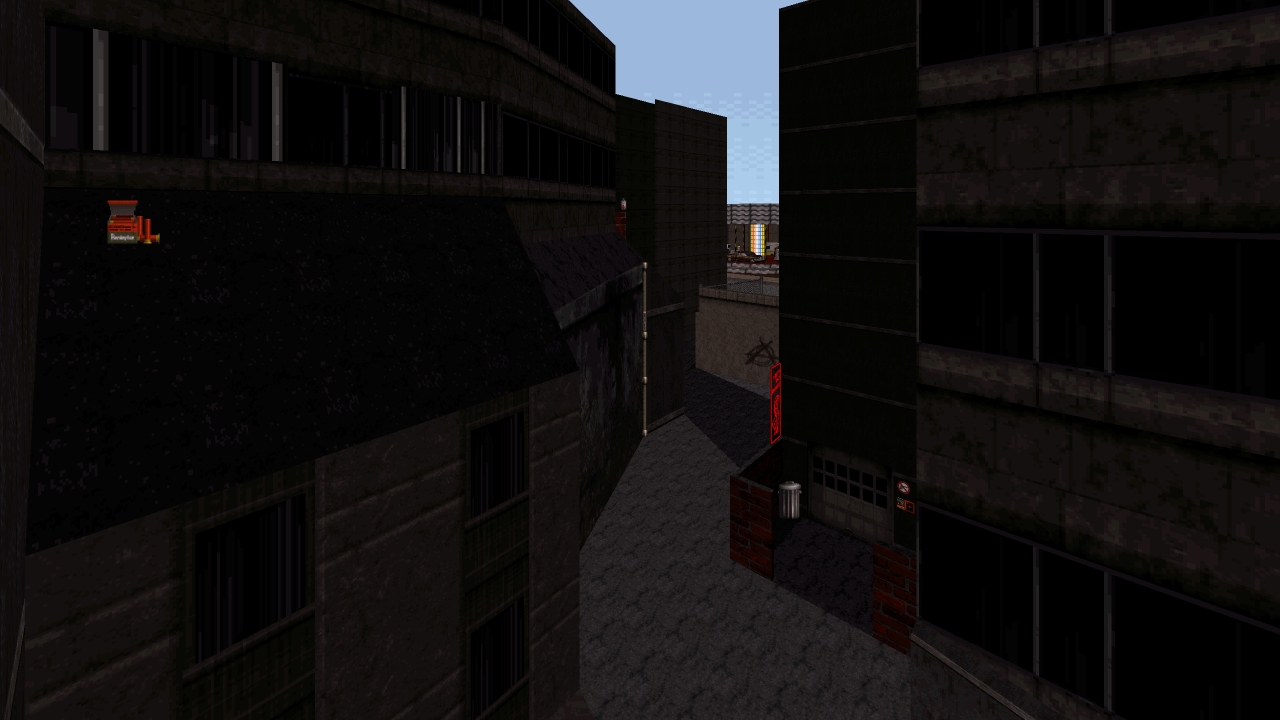 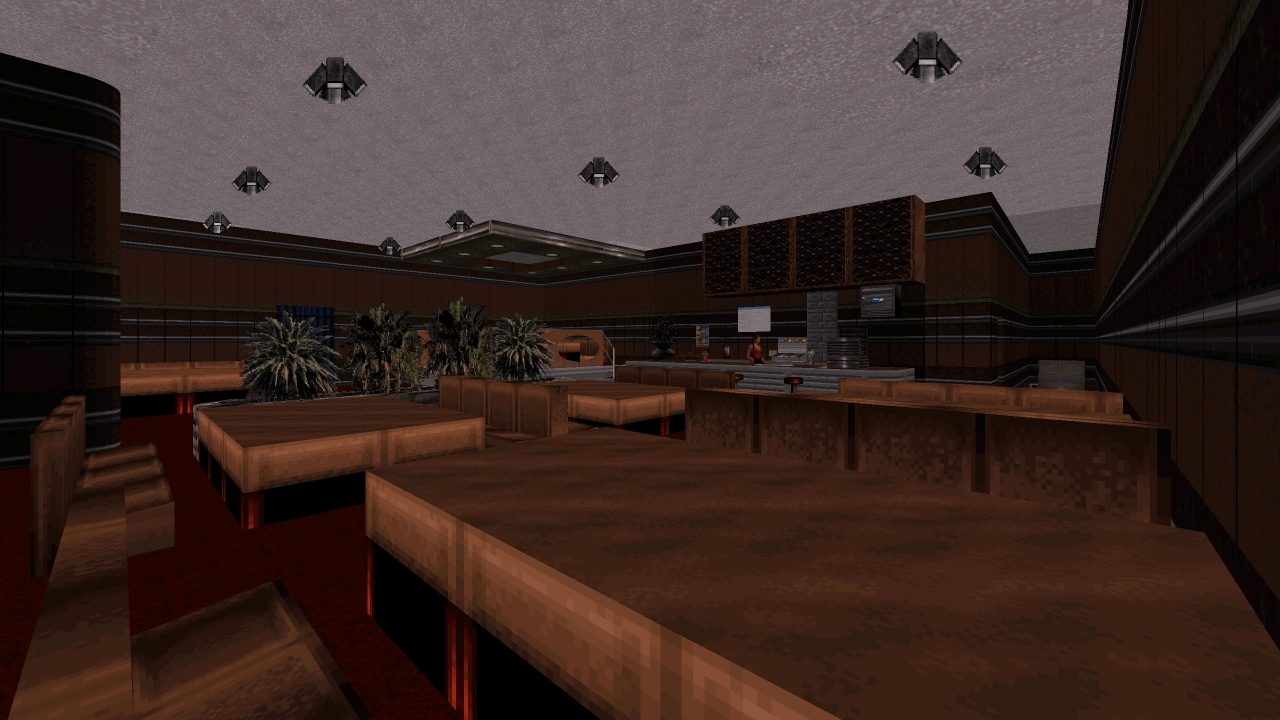 Pascal was no slouch when it comes to visual design even this early into the series, managing to squeeze a ton of personality that manages to stand out even amongst its more simpler constructions that make up city facades and its boxier road layouts. Sure enough quality is definitely a mixed bag, where interiors specifically take more risks to embrace experimentation, throwing stuff at the wall and seeing what sticks. It’s here I get a deeper understanding to how these designs eventually developed into a beloved, renowned style. Many of these choices do pan out well enough, I do love the restaurant for its fancier décor and unique texture scheme. The petrol station across from here is a well realised place, complete with several pump stations, a compact store and garage workshop round back. Other places, however, stand out like a sore thumb. Besides the aforementioned starting room, of particular note includes a partially hidden bookshop that I always forget exists due to a lack of fanfare out front. It has always appeared off to me, I can only assume its intent regarding design choices was to suggest a density of stock, yet comparative to other areas it doesn’t quite hold up as if it was a forgotten first draft. 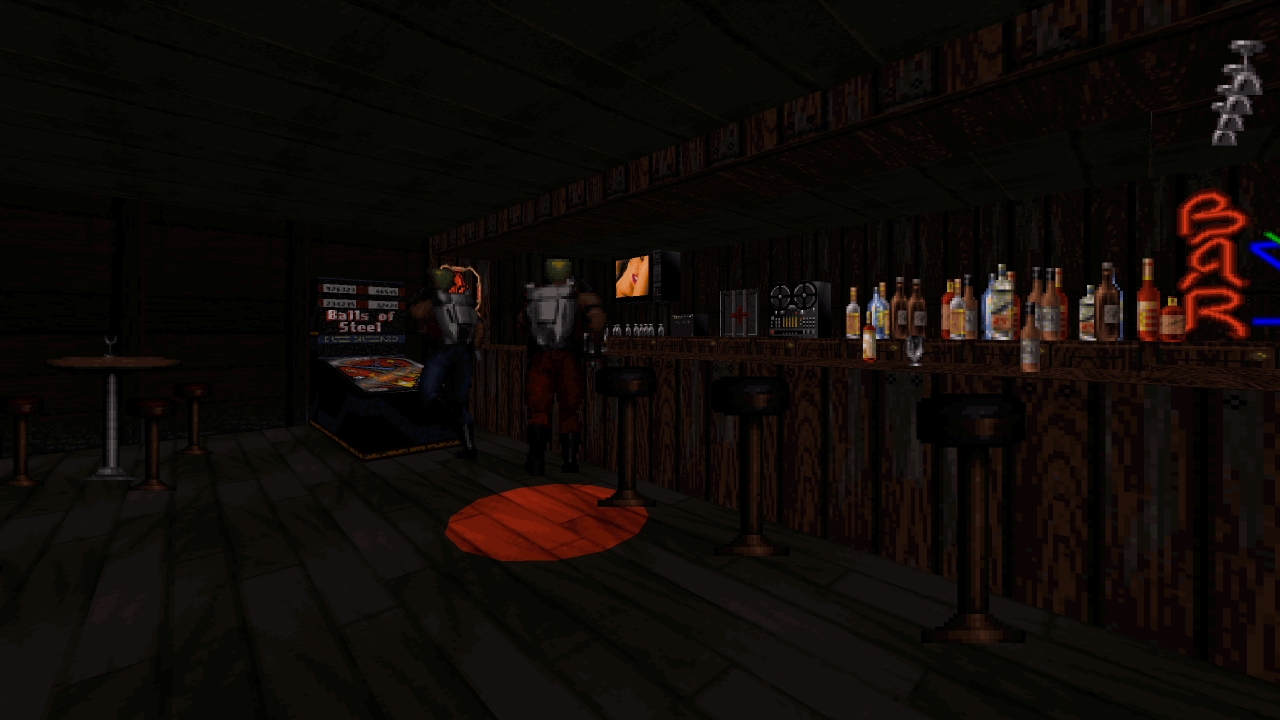 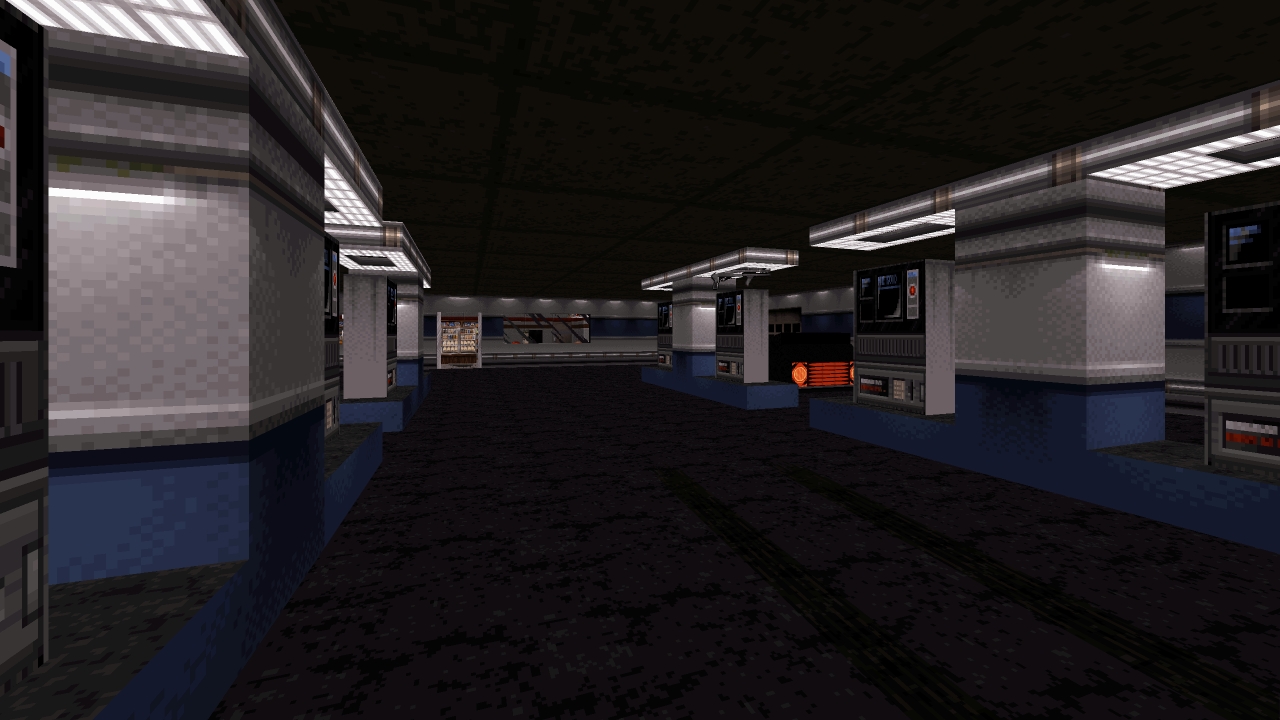 The series as a whole is packed with all sorts of novelties to help its individual levels stand apart. These ranging from unique feature pieces, to special effects that made it clear as day that Pascal knew his way around making most of BUILD engine quirks. Over these years I’ve always come back time and again to examine them as my own understanding of the editor grew. ROCH1 is of course no exception to these rules, starting simple with self driving cars that can be hopped aboard for a breezy tour or an active carousel ride which both contribute to crafting a lively city. The theatre is also worth mentioning for its interactivity, being able to control facets like room lighting and stage functions. Another nice attention to detail, even of minor note, were fences that dot down the length of a park, each piece destructible by explosives along with its own shadow cast behind it. This effectively goes hand in hand during a shoot out with a Pigcop Tank in the vicinity. Then enter these weird ultra-speed conveyor belts leading into the car park; I’m more surprised Duke hadn’t been pancaked after using one! I’m still mystified even today by how Pascal made his version of an underwater sector by the starting location, which allows players to see above its surface using a different method compared to one used in BOBSP2 and others maps utilising it. 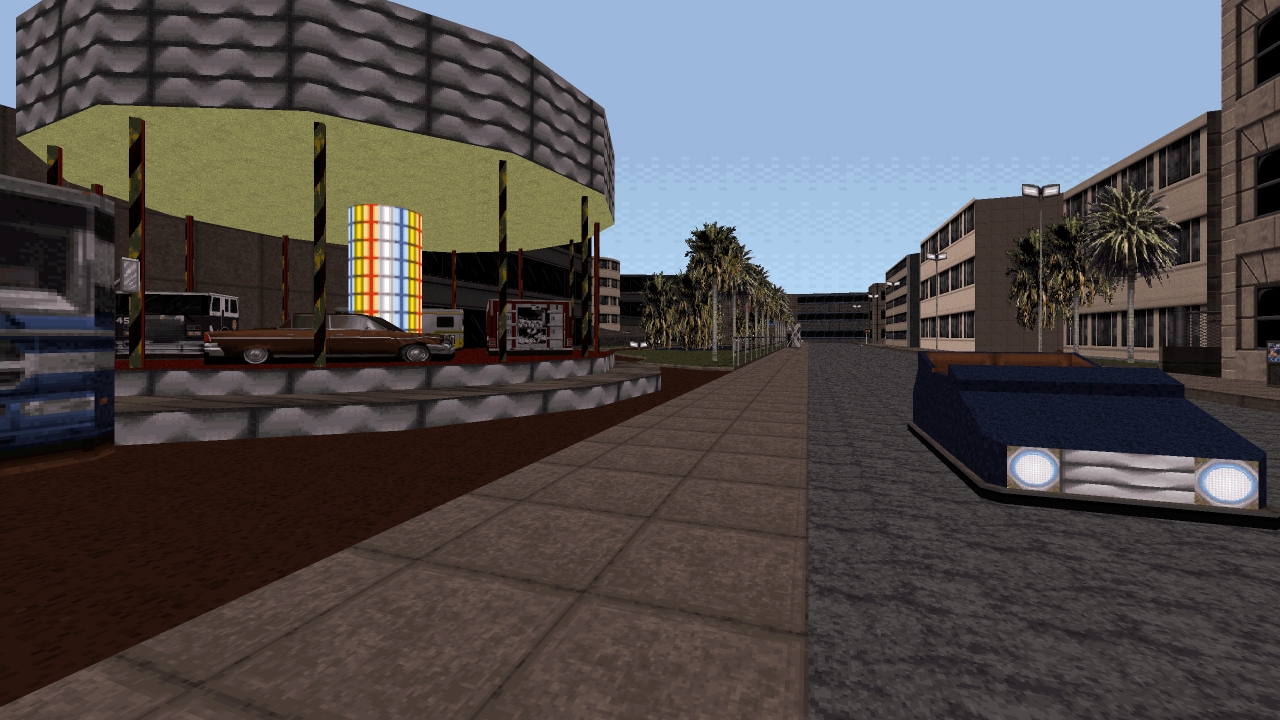 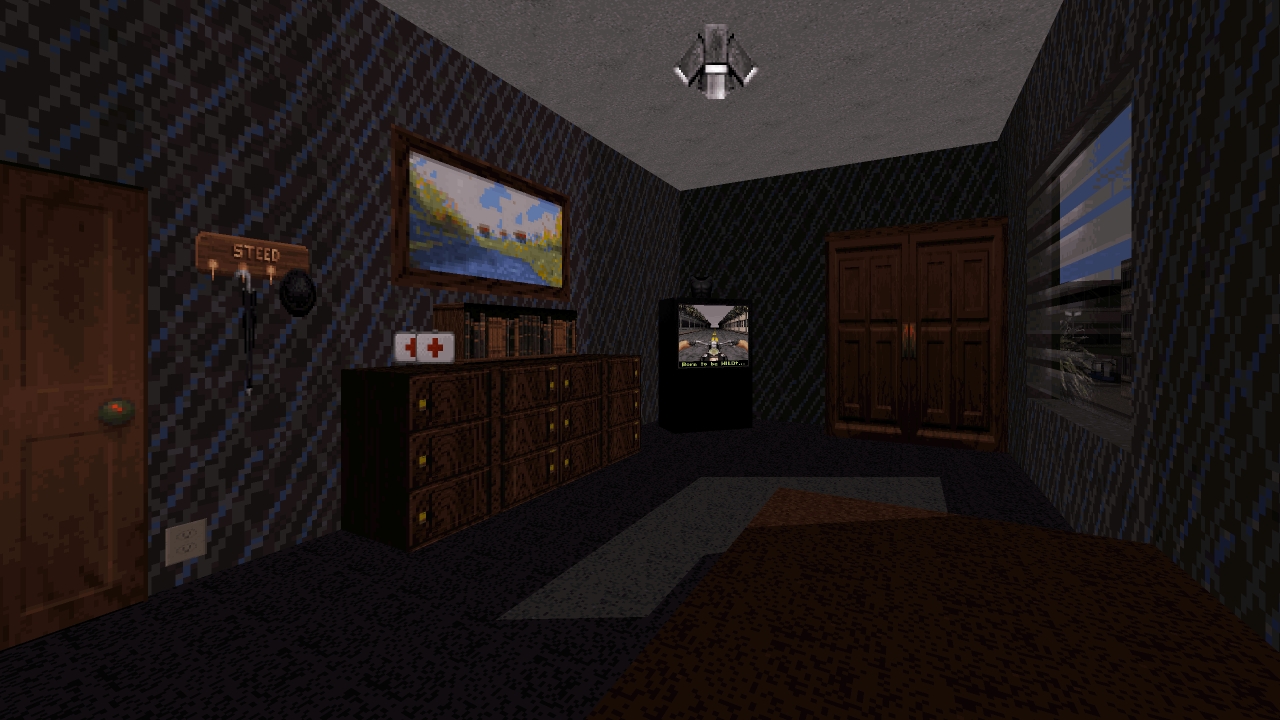 ROCH1’s laid back nature during gameplay really gave me a lot of breathing room to poke around for hidden trinkets. I enjoyed my time discovering secret locations and seeing what other interactions may reveal something special. The level scale is fairly large and dense, utilising all three key cards locking down their specific buildings. Before a single key can be acquired however, three additional locations just as important must first be rummaged through all in an effort to grab a red key, not counting other possible detours to get distracted by too. The only time I found myself lost was having trouble finding a way to access the petrol station. Two identical switches mere steps from each other made me assume they both had similar functions without checking their individual purposes, only to discover otherwise due to having no other options available to me. Besides that one instance of trouble, navigating isn’t much hassle with an interconnecting alleyway and underpass that cuts through each half of the city, while steroid caches on street corners help with getting around fast.

While rough around the edges, ROCH1 is full of personality and the start of a fanatastic, classic series of city themed levels whose influence still echoes throughout the mapping community to this day. This premier shows off the early beginnings of a mapping style that refines over each release, experimenting with what works and what doesn’t. Gameplay is laid back despite its heavy action, supplies are plentiful and exploration is densely packed with many secrets to uncover.