Have Fun Storming the Castle! 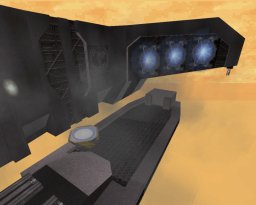 Introduction
It has been a short while since I last played a Duke3D map, and this one caught my attention, not only because it looked interest but also because SalaciusCrumb was behind the level. Same author of Voices of Authority which I gave a (badly written!) review for in the past. The map has you on a small mission to infiltrate the teleportation facility overtaken by the aliens and secure the control room. Secondly you must board the skiff to reach the troop carrier, Athena, and plant a bomb in the reactor core. And escape alive.

Gameplay
The level is short and presents a simple task that will keep you busy for a coulple of minutes. Get inside, do your thing, and get out. Alive. There’s nothing here that will bring challenging gameplay to the table, but a fair and easy ride from start to finish and fairly entertaining for a quick playthrough. The map has a few enemies to deal with, mostly consisting of Troopers and the occasional tougher foes here and there. The ending battle uses an interesting choice of sentry bots exploding through the bay doors, making a fresh change from another Battlelord fight. Although a short map, it’s a good time waster. 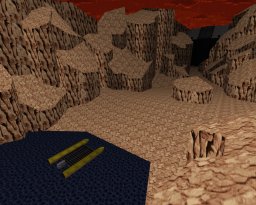 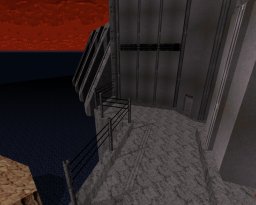 Design
The map is defined from the simple and clean look with strong texturing to really bring out the architecture well and achieves a detailed map as a whole. There’s nothing in the way of cluttered details, except perhaps the crates scattered around for cover, and big rooms are still visually pleasing to the eye. Choice of textures consist mostly of grey tones, spiced up with touches of blue, and shows a clear definition of SalaciusCrumb’s style as seen in his previous work. The level is short so the design doesn’t get too repetitious either. There’s also some neat choices such like the round blue texture on the carrier which I thought worked well without overdoing it, and some pretty terrain work and shading at the start. 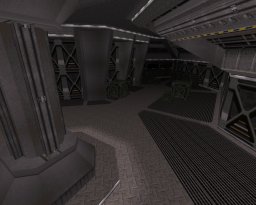 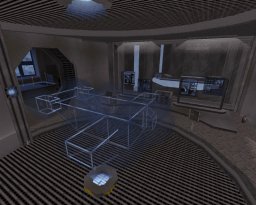 Conclusion
Short map with a simple task, easy gameplay and pleasing visuals all round. Definitely worth spending a few minutes with.