After wrapping up business, an enormous explosion sends shock waves across the district as an alien spacecraft crashes down, destroying the very streets Duke had not long ventured. Now they’re violating local parking laws and it’s about time he delivers a ticket to them personally. Take one last lap around an urban landscape in this closing entry for the ROCH series, discover how to gain access onboard that vessel and bring the fight back to them.

Structured as a second half and direct continuation from where ROCH7 left off, the ninth entry in this series begins with a bombastic interruption just before the exit door, as if screaming to the players there’s still work left to be done here. ROCH8 immediately addresses a small criticism I had with its prior entry for lacking either a narrative drive in regards to our objective or any providing any substantial interaction with the level itself making the whole experience feel static. Taking one step outside here reveals a massive alien vessel now wedged through what remains of ROCH7’s street, creating a memorable scene that sets the stage and a call to action for some much deserved payback. The objective remains familiar, five switches must be sought out to open a hatch leading inside the vessel itself, each found within areas locked behind blue access panels. I believe Pascal missed out on an opportunity to develop a subtle bit of environmental storytelling and logic behind the five switches, by making their appearance either more alien in nature or similar to those radio devices from ROCH3 as if being carried by the aliens themselves as they spread out and bunker down within the city. Hunting these down would then have tied up neatly with our end destination. For some reason, blue keys are no longer found as physical items in the world and instead have been disguised as icons that spawn them when activated. This is a change I can only assume expects a player to pay more attention to their surroundings, all while assuming they would know to interact with these in the first place of course, a quick lesson to learn early into the level before any progress can be made. 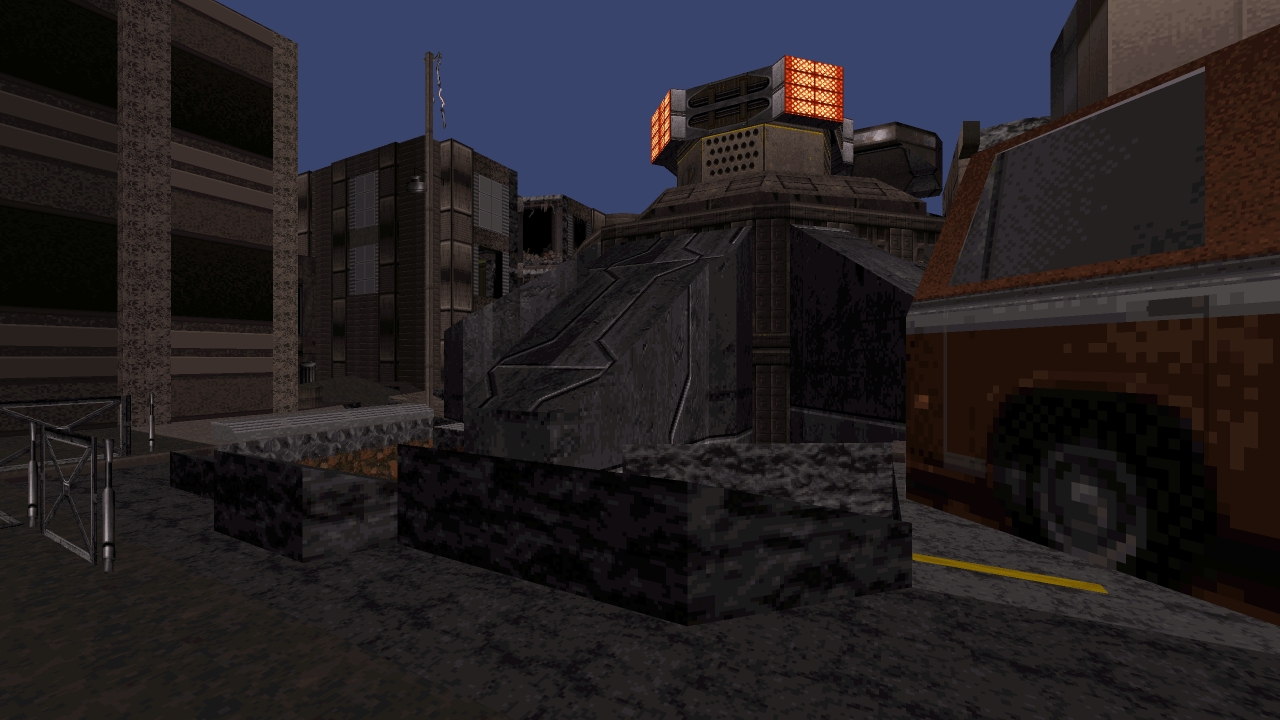 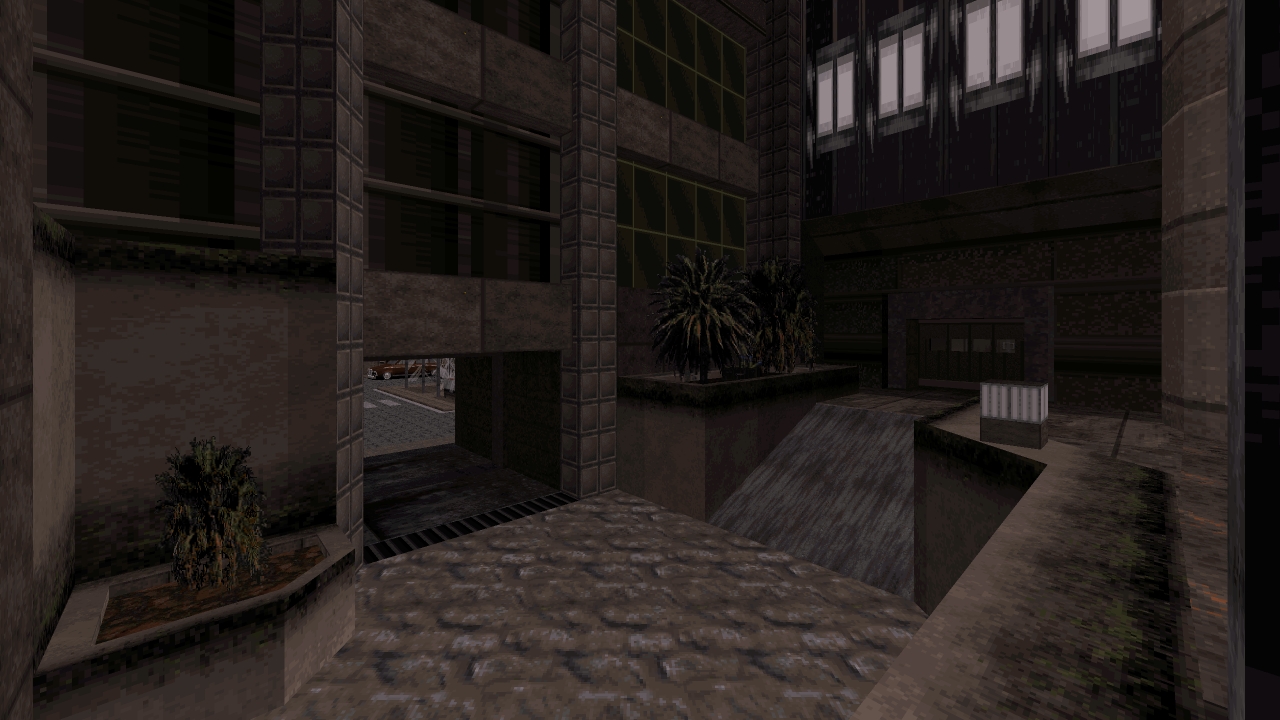 With there being five switches to as part of progression would mean more places to visit, yet its an ironic trade off we spend even less time as each location becomes a fleeting moment, over before really getting to sink our teeth before pushed onward to the next task. This has typically worked well enough for the series by focusing on a generalised urban theme and I don’t mind having variation for places to explore, except in cases when individual qualities are squandered for simply having more, more and more content. This is a preceding core issue only made more evident and would have much preferred weaker aspects axed for a stronger presence of other locations instead. One such location is relegated to a singular room with a callback to ROCH4, but serves little else in terms of gameplay by having switch and new key card seconds on arrival. Seeing more from the Sun Museum being renovated, and then combining the EDF and IMF sections into one longer sequence would have been nice possible alternatives. Otherwise the experience always came across as if something was missing, winding up a good punch but never following through with it. These leftover resources could have benefited by expanding upon the finale as well. I believe one of the strengths for DUKE3D city levels is when more focus is given to a core building, with odd sideshows as optional distractions. ROCH wants to give attention to everything, everywhere, all while being held under the original limitations of the BUILD engine. It’s an aspect of mapping that has seen better fruition in newer releases over the years as those limitations have since increased, allowing for varied locations to properly breath. ROCH’s strengths tend to shine in entries like ROCH4 or ROCH6 for condensing these efforts into richer experiences. 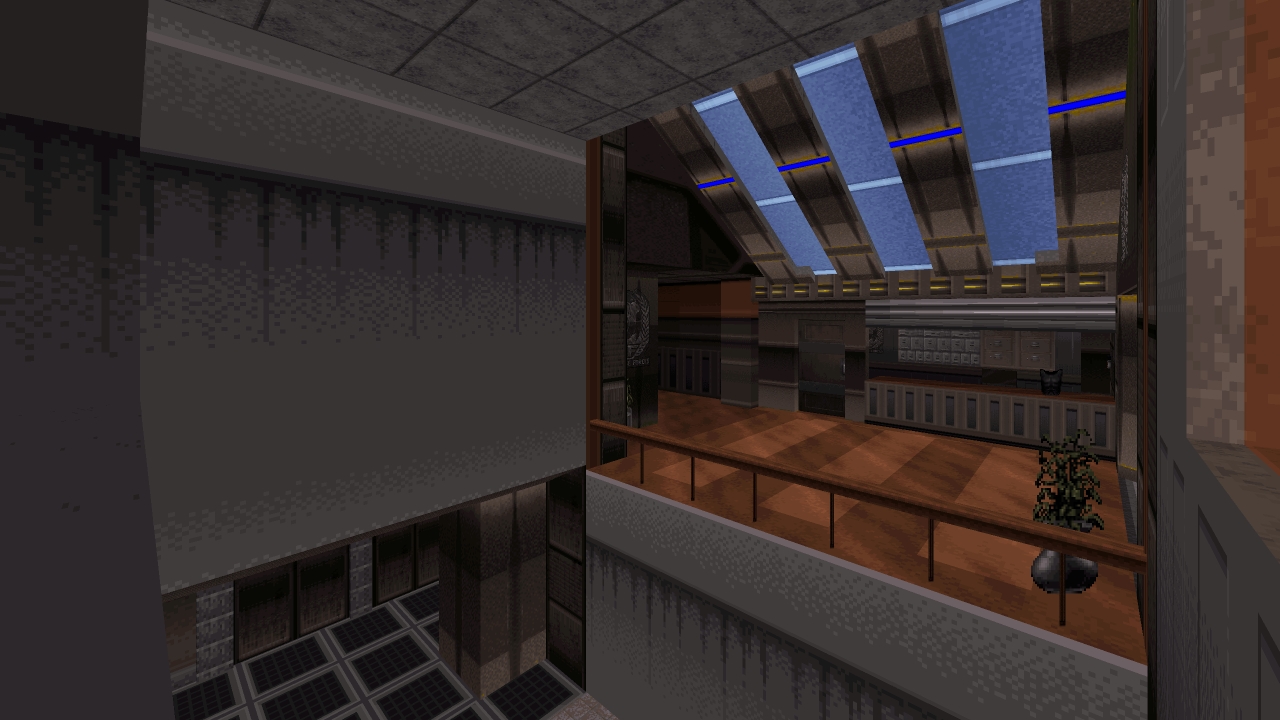 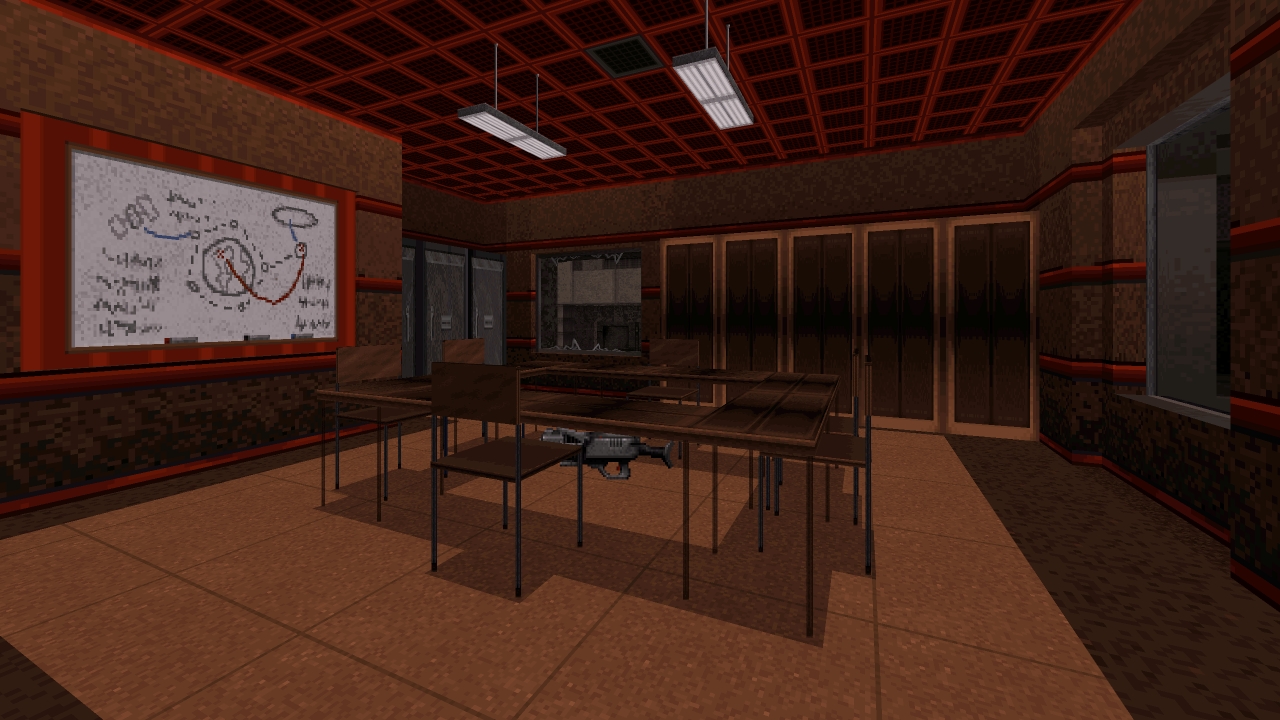 Level design changes up its typical formula, opting for this half of the district to lean into a modernised visage and taking advantage of taller buildings in varying styles. The texture scheming here also make good attempts utilising more uncommon choices not usually expected to look like facades. Anything that could appear like a window, shutter or panelled wall is used in some form, including overstretching the horizontal texture axis should it create the same effect, with spritework to further block out ledges offering some appealing results that add depth. Differing heights between buildings is simulated by way of visible rooftops, sloped edges or having large structures overlapping the shorter builds to punctuate a distinctly ROCH8 aesthetic, as if the city is much bigger than is available to explore should you manage to peer over the borders to reveal a hidden metropolis beyond. Of these buildings, I specifically like the SUN MUSEUM primarily for its creative texturing. It’s in rough shape while undergoing renovations, using shutter doors from a vehicle for windows and creating custom signage using individual letters from a neon DUKE NUKEM MUST DIE banner from E1L2: RED LIGHT DISTRICT. The interior reflects partial construction work converting the bland stone walls and floors into something more ornately associated with a museum setting. Sadly any exhibit rooms or upstairs interiors, even in a bare bone state, don’t exist and most of the building is strictly corridors leaving the rest up to imagination. 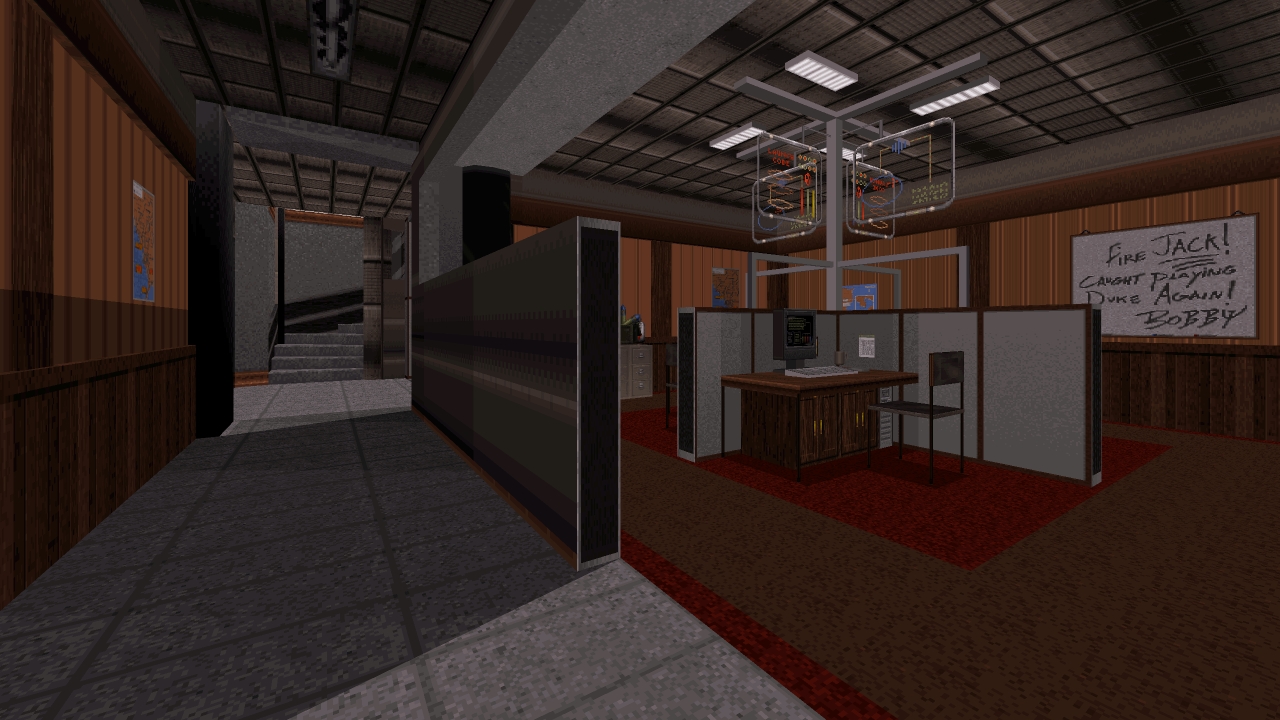 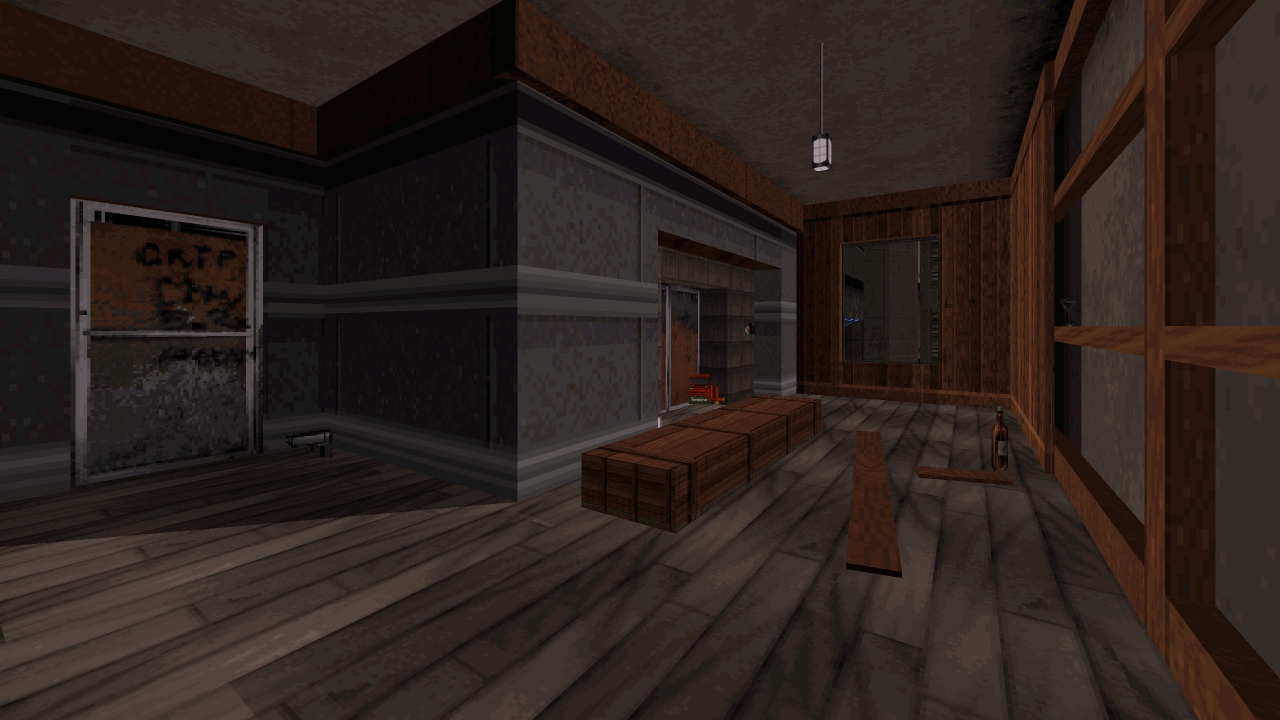 The final area is made up with a unique-to-ROCH alien spaceship section showing Pascal can indeed tackle a different theme, while still sticking close to his particular mapping style that infuses unique flavours to these visuals. Its innards provide a clear suggestion of an industriously familiar yet strange interior not obvious to the eye its a spacecraft in origin and could almost seem like an underground facility constructed by human hands, yet an alien quality lingers here. The rumbling of various inner workings like a consistent heart beating alongside other details like large tankers, small canisters and pipework weaving between gaps suggest each component has a purpose for something that can only be speculated on and you would dare not be fiddling with. I love the hand railings and thin frames covering the more intricate parts of the ship’s machinery, like a small safety measure even the aliens would be cautious enough to include and quite charming to see. Besides a fun little onslaught against an ambushing mass of Protozoids, not much of consequence really happens inside as it’s sadly par the course in terms of progression much like any other building interior found in the city until acquiring a yellow key card. The whole set piece just ends after a button pull and then thrown back out onto the streets with no sign you accomplished anything of worth or made any difference in the long run. Besides of course a means to exit the level. An anticlimactic finale considering its bombastic starting sequence and retroactively knowing this is the last we would be seeing in the ROCH roster.

ROCH8 is a solid direct continuation following in the same footsteps as its prequel almost to a fault, not allowing an individual location to properly breath within its non-linear key card hunting gameplay. Yet at the same time sets up a call to action immediately giving a sense of purpose to the main objective besides simply exiting the level. Visual design gets experimental with some exceptionally creative vignettes, gorgeous interiors and even a look at how Pascal approaches an alien spacecraft. As such it’s an additional shame we never got to experience a non-urban focused map release somewhere along Pascal’s mapping career just to experience how an entire level would be approached similar to the vessel’s interior. I’m always curious how he might have approached environments such as a space station, a romp through ancient ruins, or something much more alien in nature. As members come and go from the community, the urges of BUILD ENGINE are always beckoning, as old faces make a surprise return showing off their latest work. Perhaps one day we might still yet see a ROCH9.