The Nazis were losing the war and had set up special camp for an all or nothing tactic. Rumours spread concerning famous Nazi doctors seen entering the facility, yet what has been taking place there was still unknown. BJ has been sent in to investigate after finding out the camp is linked to Dr. Schabbs and his ‘Operation Eisenfaust’. However, something went wrong and BJ found himself caught. Confirmation was made regarding the experiments, for he was next in line as a test subject.

By focusing an entire mod on the origins of Operation Eisenfaust, Team Raycast presents 42 levels taking place within the very heart of mutant creation. The storyline campaign consists of 29 levels plus 3 secret levels that can be accessed throughout the campaign. The remaining 10 are bonus maps, which can be unlocked when meeting certain point requirements by hunting down hidden items found in secret areas. Players will embark on a mission through this facility to witness acts of human experimentation and the victim’s continued abuse through imprisonment and torture. This attempts to make the mutants here seem sympathetic, considering they still hold onto their humanity. Might not be an easy task for those used to gunning them down over the years. As a result, killing them will be dealt with a thousand point penalty. Eisenfaust otherwise plays very much like the original Wolf3D besides a few additions and changes. Reloading weapons is the most noteworthy and changes pacing during combat, where checking the remaining ammo before entering a new area will be vital or risk it becoming empty at the worst possible moment. While this is a common thing to see in modern shooters, it made for many tense moments when mixed with the nature of Wolf3D’s gameplay still intact and worked well enough. 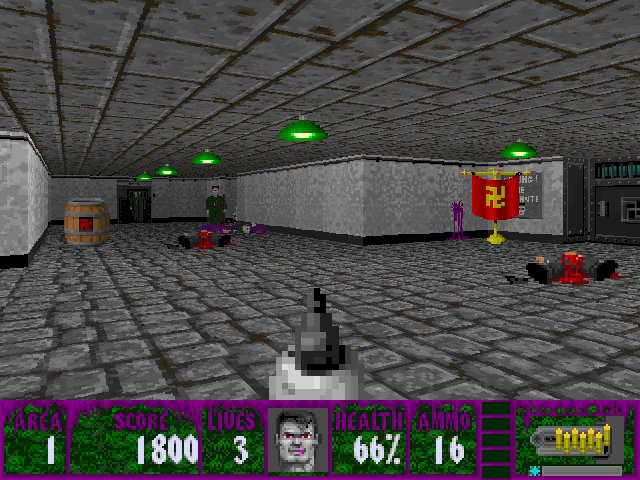 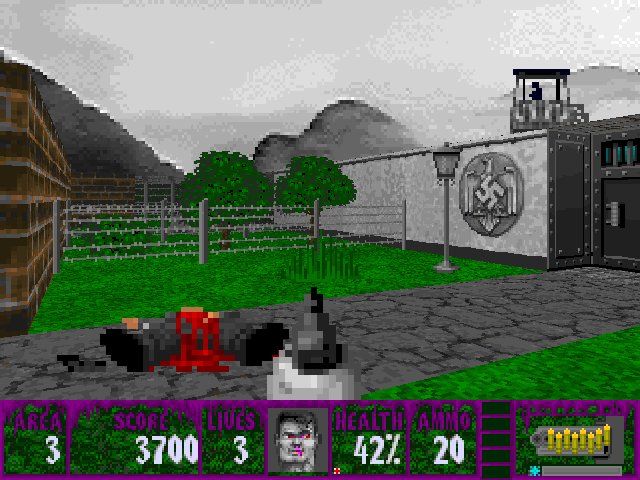 BJ’s arsenal works very much like before except for new graphics and a couple of changes in mechanics. The knife is now a silent weapon and a successful backstab will be an instant kill, useful for when the chance arises to save ammo early on. There is also a humorous opportunity to attempt this in MAP08. Pistol and MP40 are your standard secondary and primary weapons and work no different besides the need to be reloaded. The minigun however has a spin up time before firing. This was a tricky weapon to use as preparation is needed before jumping into battle, since doors cannot be opened while firing and isn’t a wise choice to use during the middle of a fight. I found myself rarely using it in favour for the MP40 as a more reliable and safer choice, only using the bigger gun against hordes of soldiers I know are coming. The sniper rifle in contrast, a new addition, was incredibly useful. Some levels have many long stretches, perfect for zooming onto targets and taking them down quickly and has helped in many situations. While powerful, it’s balanced through the small clip size. Exploding barrels are another addition introduced early which can also be utilised effectively to take down a passing group of guards or weaken the tougher enemies. 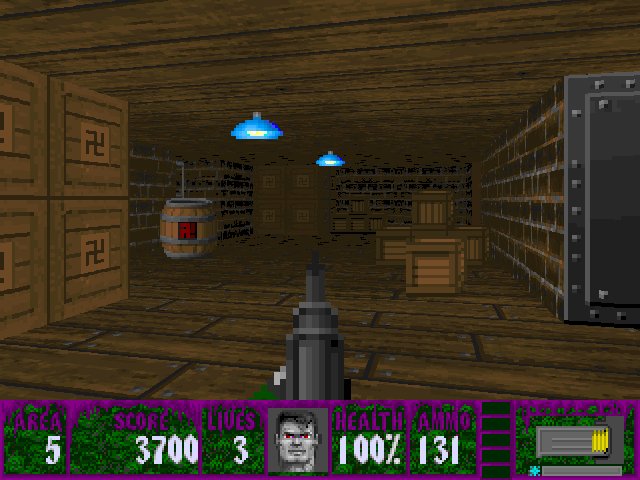 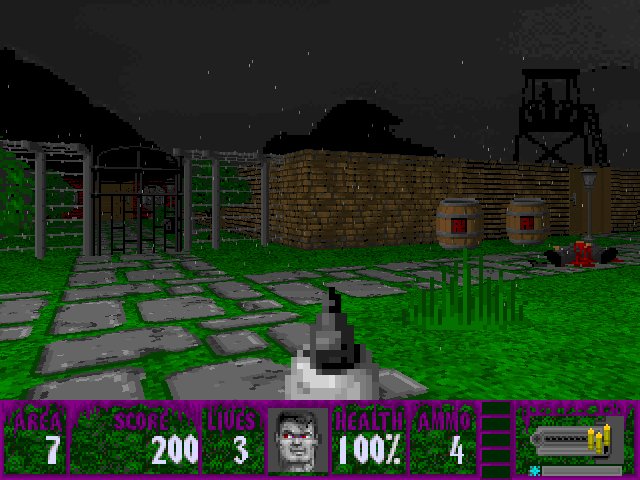 Origins was quite tough to start off with, especially on skill 3. This took some time to feel accustomed to the differences and adapt, but feels balanced after playings a couple of levels. Enemies do quickly increase in numbers overtime, with tougher brutes and stationary turrets being introduced later. Health supplies scattered around the place yield small benefits, forcing players to rely on using the portable packs wisely. Sometimes a level will offer a breather and be sailed through smoothly or provide subtle changes in gameplay, such as MAP06 only offering portable kits. In terms of ammo balance, I rarely ever found myself having problems, with more than enough waiting to be used. Sniper rifle ammo on the other hand is quite scarce in balance with sheer power. In terms of level pacing, there are usually five keys in total to be located throughout the levels. not entirely used until several levels in. Four of these are traditional keys, their shape and colour is designated to a particular door and can be a useful cue to find the next area. Layouts can often be a little confusing though as I’ve managed to get lost in certain levels. The fifth is a set of wire cutters, which can be used on short, barbed wire fences to find additional secret areas, create shortcuts or to progress further into the level. 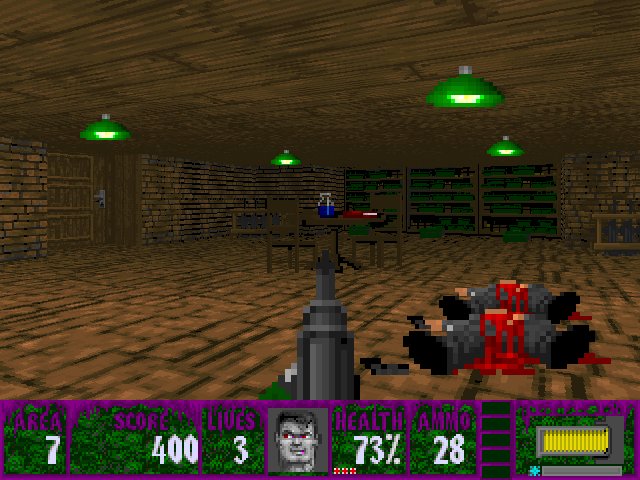 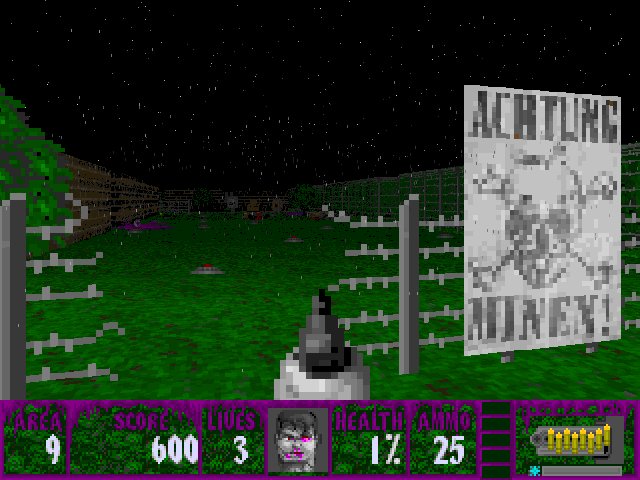 Mapping is mostly strong with detailed levels and interconnected layouts, using a selection of new textures and graphics. The main colour themes is similar to the mutants, with its greys and purples, otherwise using a lot of brown and white. There’s a lot of similarities to Team Raycast’s previous project, Batman vs Bane, concerning the mapping style and design, especially with abundance of fencing. Locations do vary a little from holding cells, labs, trainyards and other areas mainly revolving around the facility itself and the surrounding woodlands. One of the more defining aspects of Origins is the progression of time between levels over the course of playing, going from day to night. This also includes the weather effects, using rain and snow effectively, allowing familiar locations and designs to feel different with wet grass or snow covered areas. 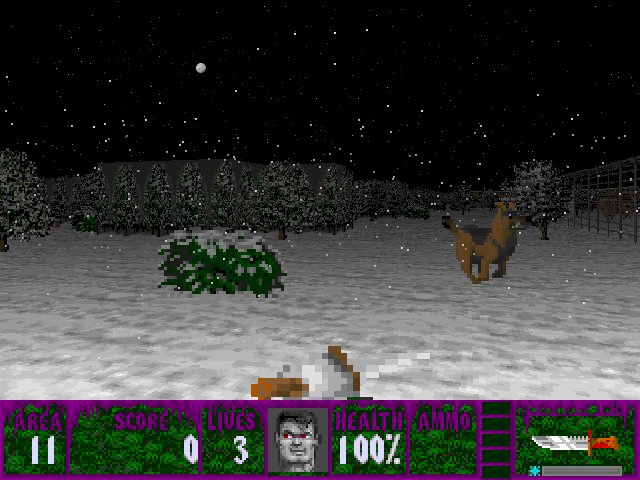 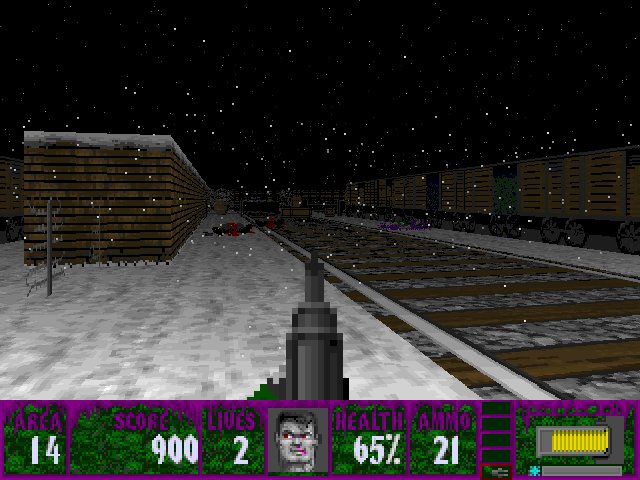 Each level is often well decorated, using objects to compliment each location. This in turn however became a drawback during the early boss encounters, much in the same vein as Batman vs Bane. The problem persists in the lack of space to move around and avoid the incoming fire, especially from explosive splash damage. One fight in particular restricted me to a long corridor where I had to retreat in order to avoid the incoming rockets. I found myself exploiting the fencing to beat some of these bosses because they were no fun to fight against in such conditions, especially after many attempts to do it fairly. Map10 does however provide more suitable areas to fight within and MAP20 also does a decent job despite the tight interior leading up to the battle. The boss found outside was a deadly opponent, desperately trying to prevent him from coming indoors and dragging the fight out longer than it should be, yet this created some enjoyable tension. 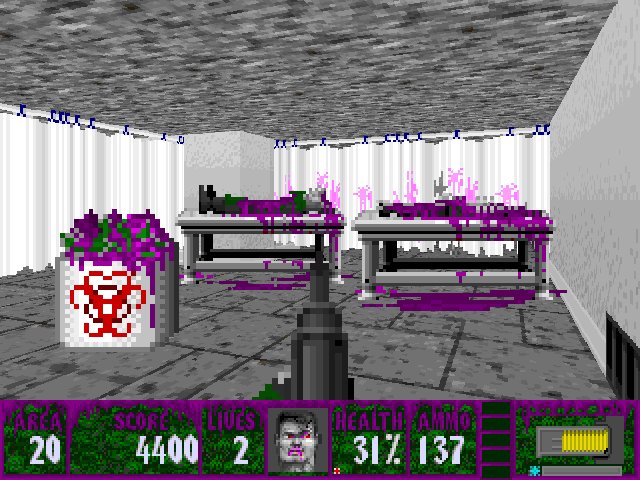 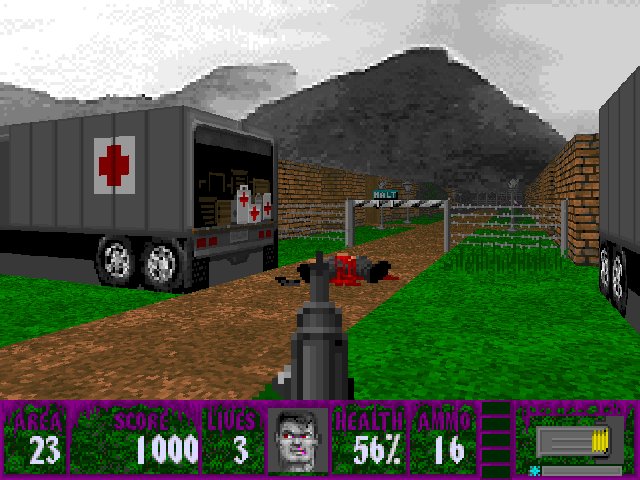 The mapping style eventually began to show too many similarities across levels due to over exposure to the same themes and locations often. Some levels do attempt at different styles to counter this but didn’t last long enough. MAP11 is an example of a darker tone being used, creating a foreboding and tense mood through dark lighting, a tight layout and the odd mine scattered about here and there. MAP21 is another which stands out, utilising the fencing in a claustrophobic manner while strategically placing the tougher enemies to keep players on their guard. While Origins does offer a decent amount of variety, there wasn’t enough variety for 29 levels worth and it seemed a little too many for the main campaign. This is despite splitting my playthrough over several days with breaks inbetween. Similar mapping styles and locations do become a little tiresome to see, lacking sense of progressing beyond certain environments like prison cells or otherwise, coming across them often at later points. Reaching the rail roads was a nice touch to spring more visual flare into the mod, but also became a common sight too soon. If more visual styles were present, tighter sense of progressing through the camp and different approaches taken with similar environments, like in MAP11 and MAP21, this might have allowed the later segments be more engaging to play. 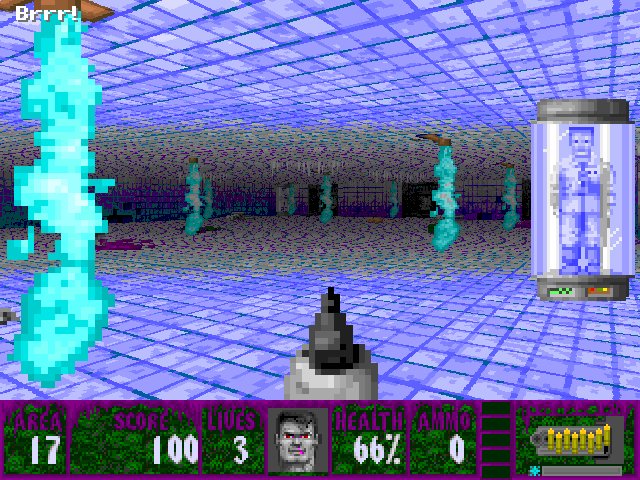 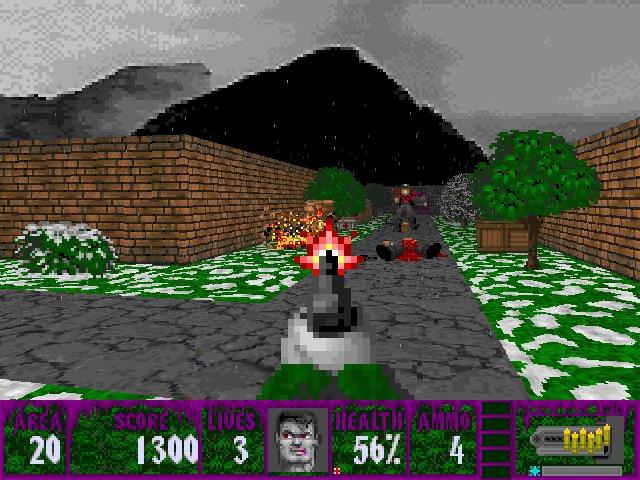 Occasionally the quality does dip, from really minor things like textures showing in other rooms evident in MAP17, or because the gameplay feels padded out unnecessarily for the sake of using every available key. This involves finding one key to access a smaller area with the next key a short distance away, then travelling back to the next locked door. This feels pointless at times and without these certain levels may have flowed better. Stationary turrets were another source of frustration, often cutting me down in a second while tucked away in some niche I never noticed. Especially bothersome if I had been planning on saving progress moments before. They can be taken out better from a distance, but close quarters is practically suicide. They’re a welcome threat to the experience but also caused some cheap deaths. 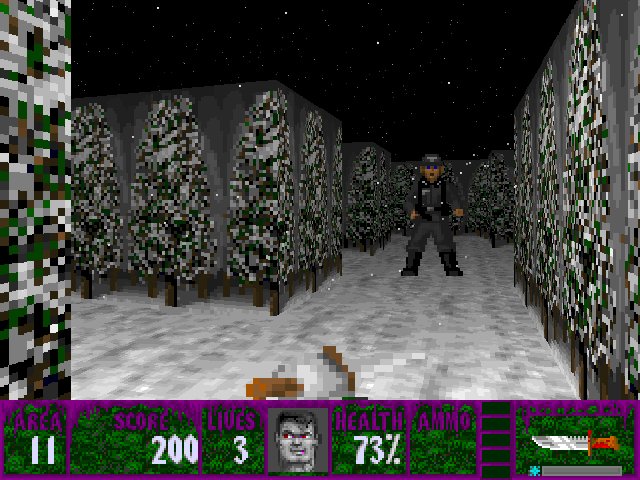 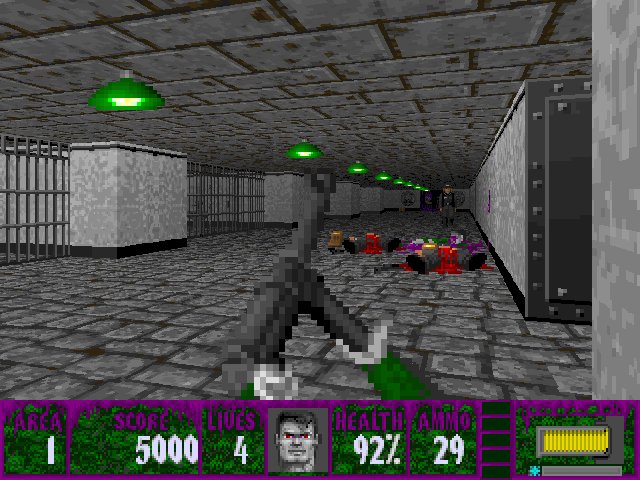 The final level was not one of my favourites and sadly left a sour taste after finishing Origins. There’s no problem with its presentation and choice to use no other enemies besides the last boss, but getting there wasn’t very pleasant. The problem persists in some of the earlier mentioned use of padding by forcing players to locate each key to move forward, despite there being plenty of build up in previous levels for this last path to victory. To make things more tedious, there are silly fire hazards that needs to be endured by rushing through burning buildings to find these keys and locked doors. The maze like layout doesn’t help matters either while the fire rapidly depletes your health each time. This level seemed more suitable as a bonus puzzle map, but otherwise felt tedious for the finale. Heading straight to the boss fight might have been a more enjoyable choice overall.

Origins presents a great set of levels, offering strong mapping, detailed levels and a tough challenge. While many levels do feel padded out longer than necessary and the finale is weak, the experience as a whole is enjoyable and the new mechanics provide a tense spin on typical Wolf3D gameplay.