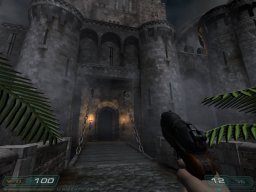 Introduction
Every century this mystical castle materialises under the full moon. They say that a dreadful king of demons inhabits the stronghold and that his curse is what allows this fortress to return time and time again. Mankind was nearly exterminated by an army of pure evil two decades ago, so by not wasting any time a strike team was immediately dispatched to neutralise whatever threat is lurking inside. You’ve been assigned on this job and after hearing gunfire of a supposedly secured gatehouse, you head back inside to find out.

Review
This is another one of those maps I tend to miss out on upon release only to discover them at a much later time and find myself surprised. The Gatehouse is a refreshing theme shying away from the crowd of high tech facilities and laboratories by taking on a medieval theme of brick and stonework. The level is not only visually impressive but has been given a really nice mood and intricate attention to details. The stronghold itself is made up of many small rooms and corridors creating tight battles, forcing you to retreat often to fire off your shots and makes strafing in and out of rooms much more difficult. The level focuses on a claustrophobic and ‘in your face’ approach to gameplay which gives it that classic Doom edge. 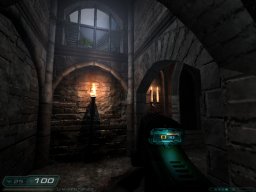 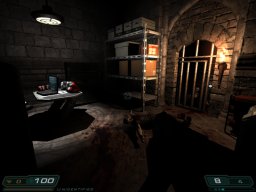 The mood really adds a lot to the level from the misty floors to the occasional piece of ambient music playing in the background and environmental sounds to ensure that the place feels alive. Lighting is also an essential part of the experience from the warm orange tones of candles and torches to the cold hues shining through windows and holes in the ceiling, while many corners still remain is shadow to keep you on your toes at all times. There’s no flashlight available to use, but it’s not needed as there is enough light sources to see what you’re doing. As you progress, the action starts to raise in difficulty and become much more hectic as a wider variety of enemies start to spawn in. Ticks can be a major annoyance however concerning the tighter locations as they get in the way a lot more, often trapping you in a corner. As a whole however, the action is nicely balanced, some spikes for challenge and more than enough ammo and health to keep you going. 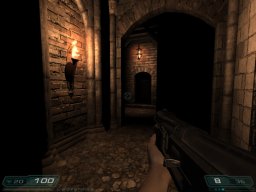 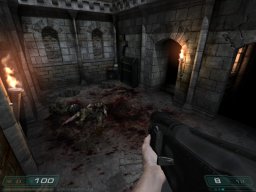 Conclusion
One fine level with a refreshing and nicely designed theme, good attention to detail and mood, rounded off with tight, action packed gameplay.

One thought on “The Gatehouse”