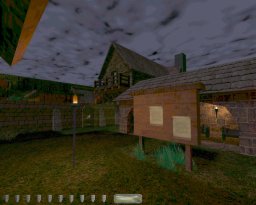 Introduction
Bookshop owner Keilnia has hired you to learn the source as to where valuable items are coming from, being offered and sold on the market by Marucha. Kielnia wishes to get ahold of these items, but your task is to make a profit on this ordeal and learn who stands behind Marucha. Additionally, it’s worth knowing who you steal from, it might save your life or be of other use. Afterall, information is the best deposit you can make, as well as life insurance. Time to move on, you hope to leave this forgotten forest by dawn. Forgotten by humans and gods…

Gameplay
During my first playthrough, I kept finding myself getting stuck as to what I should be doing next, or where to go, eventually giving up and almost missing out on a pretty good mission. I came back to give it another spin, and found myself having fun finding all the hidden switches, secret locations and loot in obscure places. Though there are times this can be a little awkward, like a switch blending too well into the environment. After a while, the patterns soon become clearer as you progress. I actually liked the way one key was cleverly hidden in the crypt section. The mission is generally split up into two distinct parts. The first is a small house section consists with a few human annoyances, more specificly the thief guards, either patrolling the garden or too drunk to even realise they’ve been blackjacked. The second area is set within the crypts, roaming with the undead. There isn’t exactly a huge number of threat as a whole, as there aren’t many haunts to get in your way and they’re easy to avoid. Or backstab. The mission is nice for its focus on finding secret switches and locations, requiring a keen eye to find them. As such, the mysterious tone just kept me wanting to go and explore every inche to ensure I found as many secrets and loot pickups as I could before finishing, discovering several new objectives activated by specific objects on the way, which can keep you busy. To really get the most out of this one, it’s recommended to play on expert, but that could be said for most missions out there anyway. 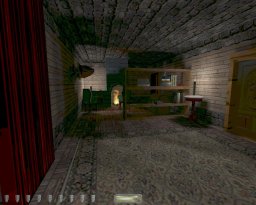 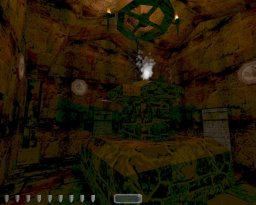 Design
As a whole, the author has achieved a generally good style for both sections of the mission with some solid construction between them. The first section represents a household that deals with logging. The residence is placed in the middle with the sheds for storage and barracks for the workers placed around the edges of the garden. All of this being centred within a forest. There’s some good attention to detail which adds a level of realism such as, logs that have been piled up outside, wear on the outer brick walls, and a water tower to provide for the household. Even a simple thing like the tall chimney that sticks out from the main building works wonders to the scenery. The only real concern is the surrounding walls that makes an attempt to appear like a thick forest, but this comes across as being too flat. The second section is a crypt, deep underground with various other tombs and secret areas within it, storing all kinds of hidden treasures and many coffins. Lighting here has an odd twist with some spots not actually having a light source, which I feel adds even more mystery to the crypts as a whole. There is also an attempt to make the place feel dark and haunted, without anything becoming too dark. This is created from an interesting use of texturing, lighting and other small details like spiderwebs to give it that extra sense of abandonment. The two different sections seamlessly blend in well together without feeling out of place. 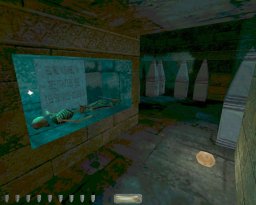 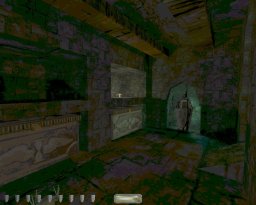 Conclusion
Explore the house and venture through the crypts, the Forgotten Forest has a nice blend of mystery, exploration and secrets where the real difficulty lies in having a keen eye to find hidden switches.