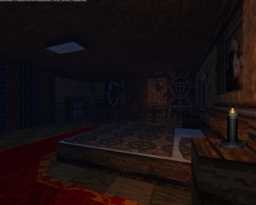 Introduction
You wake up in your house. And you’re all alone. The only thing that is with you, is your sanity. Or is it? Unloved is a horror themed wad which focuses on the exploration of different realms and solving the mystery of the house in which you reside.

Review
Unloved begins on a tame note to introduce and settle the player into its approach to gameplay by giving them a restricted taste of the house and some part of the first dimension, The Basement’s Basement. From here onwards, progression will open up more sections of the house as the player explores each realm for keys and switches, killing monsters and trying to discover the entirety of each place in order for the front doors to unlock. This will take a good chunk of time to succeed, taking me about a few hours to finish with several breaks inbetween. What Unloved boils down to and remains consistent with is its core aspects of tough battles and large monster counts, which doesn’t change much across the wad besides from differences in the type of enemies being used and the general mood of an area. In order to keep things fresh for battle, there is a much larger bestiary to be discovered here, but more on that later. 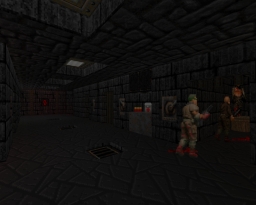 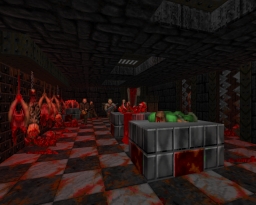 The central scene of this horror takes place inside of the house and does something I’m quite fond of by working as a hub to access four different realms in various rooms to locate keys from one nightmarish place for a door in another. And this journey can be a brutal one. The house is pretty much your sanctuary, but also a gaping hole where that very darkness is ready to leap out. Choice of music here is a fitting calm track, yet unsettling in ways because it is only a temporary moment of peace before continuing onwards. All four realms embark on different visual styles and atmosphere, whether hellish, or dark and foreboding, each with their own ambient music to complete the picture. This keeps the wad fresh, especially considering the player will return occasionally during the course of progression. There is some minor non-linear aspects though too, such as one door in the house that can be unlocked with either the yellow or red keycards, suggesting that one of them can be acquired at anytime and still have access to the remaining realm. 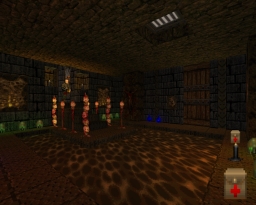 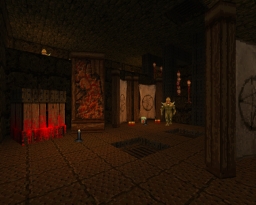 Monsters are everywhere and big fights will be common. Every major part of the action will be a fight for your life with plenty of respawns and sneaky monster closets. The typical Doom affair really, except many of these fights do take place in tight locations which will require some quick wits. However at times it does tend to feel like there are too many cheap shots thrown at the player and too many buttons that need to be pressed within the same area to push onwards. During my experience as I was nearing the last third, the action started to wear thin, consisting of too many large fights and ambushes one after another. This may sound contradictory to my CyberSky review, but that map had considerably larger rooms to allow more freedom to run about in. Many times here there will be a chance at being cornered, while some spots do work effectively to your advantage, there’s more risk involved and thus a lot of pressure on survival. Throwing in another such fight soon after does become exhausting where much slower build up could have been nice to see. Perhaps some areas could have been cut down to offer a more streamlined experience though and do without the fluff, like one stairway which is filled with Golems, and when you think you’re almost done it continues for a while longer. 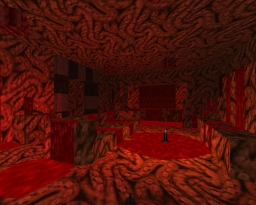 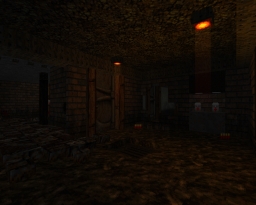 As I have mentioned earlier, there is a large set of new enemies used throughout the experience to add more flavour for gameplay, and considering the general scale of each level, doing this wasn’t such a bad idea as most of them do fit well into the themes. However some, not so much. Those dark dog-like imps were perhaps the most suitably used out of them all, giving me a start when one would rush out in front of me after assuming I had gunned them all down, effectively camouflaging itself into the darkness. These new enemies tend to be weaker or stronger alternatives to the original cast, whether they be demonic of ghoulish. I wasn’t too keen on the choice of wizards though as they felt out of place with the magic. The same goes for the, what I assumed to be, fire drakes which seem too fantastical than horror. Bats were probably the most annoying enemy of them all, barely visible, chipping away your health in no time and to top it off, hard to hit. Luckily they were rarely ever used, but a nuisance the moment I noticed them. I may be overreacting in ways, but they did make me begin to dread the later parts in case I were to come across them again. 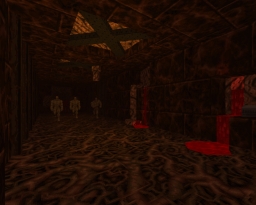 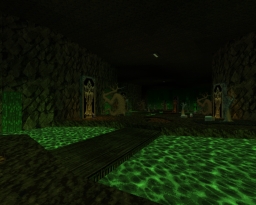 Schneider has paid some close attention to his design of the various dimensions to present their worlds differently from one another through visual themes and atmosphere. The Basement’s Basement is a very menacing place with the sounds of chainsaws humming away, prison cells full of mutilated bodies and skin commonly used as a form of decoration. It comes across as a realm of torture and pain conflicted by the demons which reside here. In contrast, The Halls Below focuses on the theme of foreboding darkness, as the player travels through its many corridors of locked doors, never knowing which one might suddenly spring open. The Living Room is the organic side of this nightmare, tangled entrails covering the walls and shallow pools of blood soaking the floor. Lost Childhood is kind of a surreal realm, while at times the locations feel real, it then throws in some odd ones to boot such as the pathways which open beneath doors. Each one of these dimensions do offer something different while remaining on a high note with detail. The author had recommended that this was was played using hardware shader lighting, but caused my framerate to drop too much and forced me to do otherwise. Just to note however, it worked well enough to grab screenshots for this review but I couldn’t imagine how I could survive in a large battle with it on. The general effect of lighting is still shown through and a good use of fog for that extra bit of spice to the overall scene.

Conclusion
The focus on gameplay is based around exploration and tough battles, which may become tiresome after a while due to its length, but the variety of themes and styles help to keep things fresh. Unloved was a interesting experience and offered something a little different, while keeping in mind what Doom is about.