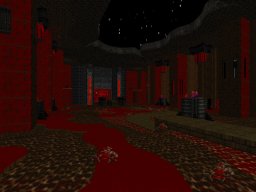 Introduction
Cybersky is simply a large and brutal slaughtermap, forcing you to fight against large hordes of enemies at a time in a huge, hellish themed environment. With an enemy count over 2000 and plenty of weapons and powerups to get your hands on, how does this one fare?

Review
One aspect that quickly caught my attention was the sheer size and length of this wad, which never seems to end no matter how far I were to progress, with a constant supply of big locations to battle it out against hordes of enemies. When it seems you’re closing in on the end of the map, you find that you’ve only just reached the halfway point. I’m not exactly a fan of these types of levels, which I’m assuming the term ‘slaughtermap’ refers to, where you must fight copious amounts of enemies at once in certain locations before you can move on. The action is constant and forces you to keep a close eye on every projectile being thrown at you from fireballs and rockets, while keeping clear of the Archvile’s favourite attack. The enemy count thrown at you aren’t always overwhelming, mostly coming across as a tough feat to get through and other times dull. There’s more than enough ammo and health around, including the many powerups to aid in the fights. Difficulty is generally high but very reasonable to achieve. Kind of rewarding too. Things tend to pick up better once you’ve got a hold of the BFG, naturally. 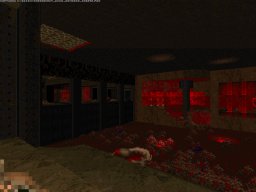 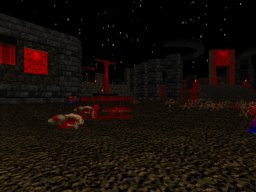 All the enemy types have been used throughout the level and doesn’t make any compromises to be gentle, pushing tougher foes early into the map which include Cyberdemons. And lots of them. Not all enemies are simply placed on the same horizontal plane as you, where some attempt has been made to ensure battles will play out differently by the use of height and distance variations, or even tricking the player through the use of teleporters and not knowing when this may happen. Although I already mentioned there are a lot of vast rooms, some of the action also takes place in tighter spaces making the rocket launcher too risky to use possibly forcing you to rely on something weaker yet safer. There are even a few times when you need to fight on a ledge while trying to avoid being hit without accidentally falling off and having to navigate back where you were. Some areas can force a little more thinking in how to approach them, to effectively get rid of the hordes quicker and save on ammo and health. This is more useful at the early segments when choice of weapons is limited, one example is to take advantage of Cyberdemon rockets and wreck havoc. The other more obvious approach is causing a lot of infighting. 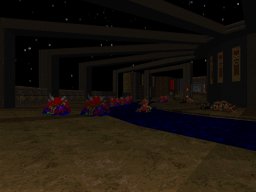 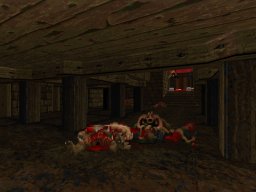 Progression will lead from one big area to the next, engaging in combat and pulling switches to open up more of the level and you’ll soon find yourself revisiting previous locations to enter all those places you’ve set your eyes on and wondered when you’ll go there. The wad makes use of a hellish theme and despite the large scale, has a lot of detail going for it and provides variety. Visuals are good, using all kinds of styles within the chosen them, from stone structures, a library to caves filled with lava. The music choice from Heretic is used but starts to grind on the ears quickly, the fast pace is suitable but the track itself doesn’t work well, only giving me a headache instead. Something fast paced yet with a softer tone and longer playtime would have been a better choice. 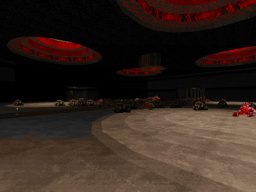 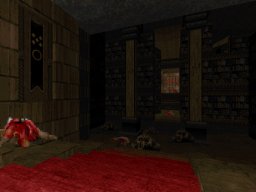 Although I mention that I’m not keen on these types of horde based levels in general, this one came across as enjoyable at times and the gameplay feels fair and right most of the time. The huge waves of enemies at first felt overwhelming, but sooner or later they’re not much of a problem providing a challenge. The level requires a consistent eye on ammo though, especially when Archviles like to revive enemies, only to put a dent in your supplies. Backtracking will more than likely hold missed resources though. Eventually the level gets to the point I just want it all to end and gets tiresome, especially after a huge, tough battle is over only to run into yet another later on. Of course that is the general approach of the gameplay, but much of the later areas begin to feel that they’re there just to drag the wad out longer and necessary. I feel this way because things calm down and get easier in the last segments when there’s only another hundred enemies to get through. The big lava cave, with the Cyberdemons on pedestals, would have been a good area to end things. Or somewhere along those lines. I had to play the map over the course of a few days just to break it up, making the final playtime around 2.5hrs.

Conclusion
It’s simply a huge level with a large enemy count, with a mix of challenging and tiresome hordes to battle your way through with a neat looking, detailed and varied hellish themed design.