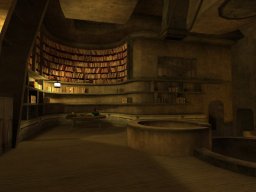 Introduction
Just like any other day, he would pass that phone box on his way home from work for the past four years. But today was different. Today the phone was ringing. Taking the opportunity to add any kind of excitement into his life, he answers the phone unsure what exactly he was expecting.

Review
Now here’s a refreshing change of scenery from the usual affairs from City 17, as you will find yourself taken prisoner in some unknown place. No one wants to talks to you, keeping their lips tightly sealed, except for one. This odd behaviour from the characters and the mysterious location started to intrigue me, wanting to know and see more, and that’s always a good sign for me. It’s once you must see the leader of this structure that you start to get a little bit of meat with what is going on here, while not exactly revealing anything major about these people and the world in which you currently reside in. This was a good way to keep you guessing and speculating.

The narration actually works well, though at first it is jarring because he doesn’t react to the situation at present, but rather as if he’s telling his story. It’s not until this plays out better the further you get that I started to like this approach as your actions will get a reaction out of the character as if this actually took place. There were a few occasions events would play out in short cutscenes, taking away control of the player to get through them. They aren’t too bothersome as they are kept short and you come across less of them in the later levels. 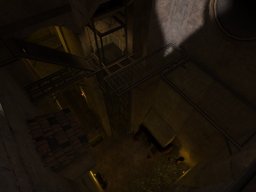 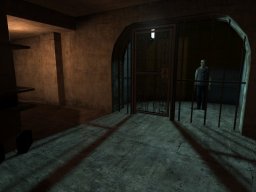 There were some definite dark undertones being played throughout the mod. The impact concerning the female was broken simply by her calling the guards ‘assholes’ in such a casual and snobbish tone, whereas keeping her quiet could have created a more thought provoking image. The new voice work is a mixed bag with some good and bad. The narrator and woman wanting her radio back were done well and suited their character, while the forced anger from one of the guards was fake from the quiet and tight tone it was spoken in.

Once you get going, things at first seem to be very adventurous and puzzle based, only to reveal that it has got a fair bit of gun action throughout the three levels in small bursts. The combat side of things got stale quickly because the guards tend to bunch up in a queue making it easy to pick them off one by one as they rush through the doorway. They can be completely avoided though once you’ve figured out the next route ahead. 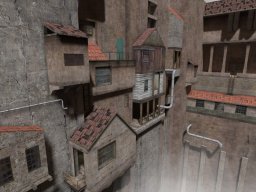 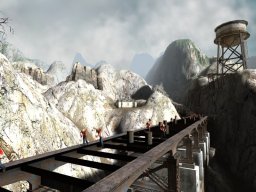 Design uses a fresh setting, inside and out. The good use of curves for arches and other details to ensure the place doesn’t feel too square give a nice touch of a differing culture. This style remains solid and consistent during the first level with a lot of vertical variation and moody lighting. The exterior also sets itself apart by having many smaller pieces of the structure sticking out, such as balconies and pipework, lending itself to a jumping puzzle as well. There were also some other nice locations such as the underground tunnels and the large section at the end which has a completely different architectural style compared to the first location, really making you wonder more about this world, or whether it’s actually all real.

The mountain region in the later two levels however were a bit on the average side as the terrain looks very awkward in places with the large scale or stretching textures and odd construction for the routes. The usage of broken wooden bridges turning them into ramps was a nice touch of abandonment. But the layout as a whole made me wonder if I was doing things in the right order or not. For example, the area with the feud between the man and woman over a radio can be completely bypassed by climbing over the right parts of the terrain if you wanted to. I couldn’t tell if this was intentional or not because it was very easy to do, but in such an odd location. 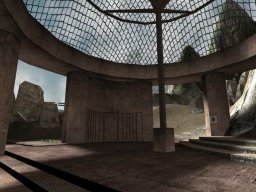 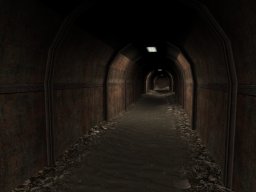 The mystery, adventure and storytelling kept me going to see more of this odd world and its inhabitants. I constantly wanted to see what else was in store for me, and the ability to decide how you act within it adds a touch of variety for replays. Trust everyone or shoot them all down? It’s possible and optional. There may be several quirks with the layout and combat, but the idea behind the project works well. I didn’t, however, like how the ending was an anticlimactic fade to black. Pretty disappointing to see, especially considering they’ve used cutscenes here and there to present events already.

Conclusion
An adventurous mod set within a weird world, where mystery about the location and its inhabitants drives you forward, with a good design throughout. Few negative feelings about the layout and combat, but the mod is solid as a whole