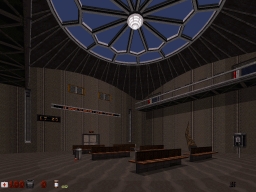 Introduction
Last Pissed Time is a map from Russian author, Maxim Chinyakin, which mostly focuses on puzzle solving, than blowing alien’s to smithereens. This is a pretty rare sight to see amongst most other releases for Duke3D, but always welcomed to add a bit of variety to the collection.

Gameplay
As already mentioned, Last Pissed Time has a heavy focus towards puzzle solving throughout the map, while including various enemy encounters into the frey. The puzzles are mostly about logic and math, from counting up numbers, turning reflective surfaces, colour codes and so forth. Not usually seen done in other releases for Duke3D, this adds a rather nice bit of originality to the overall gameplay, however some of the puzzles may take some time to solve. The general flow is has a bit of both sides of the coin. At times it can be enjoyable, yet at others it can become boring when getting lost as to what to do next. Action is mostly fair, with the odd tricky scenearios here and there, but there’s enough supplies to get you through. There also appears to be a case where you need to obtain and use the blue keycard before a specific time, which has only ever happened to me once for being too slow the first time round. 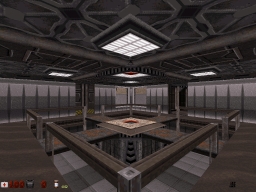 Design
Another fairly strong point with the level is the impressive design throughout most of the map, where structure remains detailed and texture choices are well made. The level takes place within some sort of high tech facility, which includes a variety of locations. Each section of the map takes up a different design, yet consistently blends into other locations fine while making use of some solid trimming work. Lighting also really adds to the depth with suitable shading. The relief work in the ceiling of the main hall is one of the impressive elements of detail the map includes, amongst other strong points found throughout, such as the variety of fresh looking doors and general spritework. Another noticable uniqueness to the level that gives it that high tech atmosphere is the usage of solid colour lights, mostly indicating locked doors when they’re red, or green when unlocked. Other neat little effects include animated advertisments on the wall, scrolling text and a working clock. 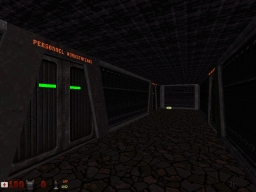 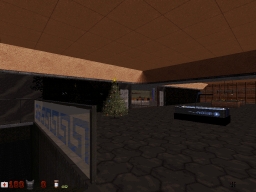 Conclusion
Heavy focus on puzzle solving along with a fair amount of action throughout, some impressive design and interesting new ideas and effects throughout.