Gameplay
Very much like Quake, as intended from the team, however ofcourse with modern feel while playing. All the weapons and several enemies such as the Shrag, Fiend and Vore make an appearance within this short but sweet mission. Generally this one is challenging to a good point, considering it’s size so this keeps the length going at an enjoyable pace. The atmospheric hallways and rooms add tension as you explore, in fear of a fiend jumping out at you or a Vore’s attack catching you off guard. Enemies have been developed upon making them much more viscious, especially the Fiend as it will tear you up if cornered, add sense of fear torwards the enemies some games seem to lack. Elements are pretty much the same as seen in Quake, such as how the weapons and items rotate above the ground, the keys and some portals which keep the intended game atmosphere in there. Although short there is plenty to come across and try out all the good things from Quake in a more modern engine with plenty of new effects and a new music track to finish it all off, although it does get repeatitive. 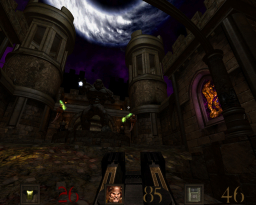 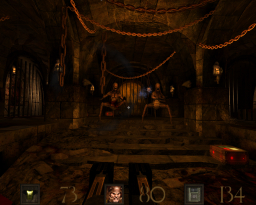 Design
As suggested by the title, this one takes place within a castle using a similar style of which is used in Quake but improving the visual design and structure by quite a whole. The castle uses a lot of great structure throughout that remains detailed and realistic, with several curved walls, high and low arches, gates both normal and broken, chains hanging across ceilings and attached to walls, which then add to the gothic theme in each area. Design isn’t too repeatitive as it changes in a slight sense when you’re either outside or inside, upstairs or downstairs. Textures obviously help add to the castle’s ambience, while being quite dark work very well in the locations used, broken walls making the place seem old and worn. Dark blue, night sky lighting fills the exterior locations which help make the lighting bolts feel more in place with its surroundings and adds a sense of cold and calm, while being the opposite. Warm, orange lighting from the torches make the interiors feel amospheric while venturing through the creepy hallways, so lighting is generally good.

Conclusion
Short, enjoyable and challenging experience and great design. A must for Quake fans. 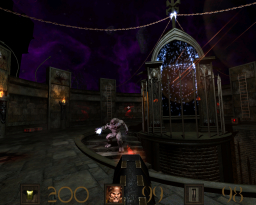 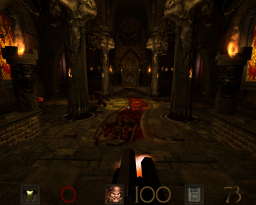