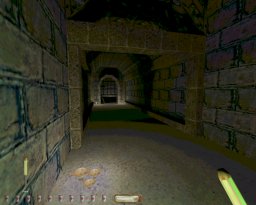 Introduction
Metras has to make a break for it after having been caught in the act of thievery, while a parade of guards give chase not far behind. It is not until he reaches the woodlands outside of town before losing them. Not wanting to risk anymore chances, he finds temporary shelter behind the broken grate of what appears to be a drain pipe. It isn’t long before the guards catch up, determined as ever. The only way out of this is to continue on, into the darkness.

Review
Tension is the key theme during the mission where there is a consistent build up of atmosphere. It didn’t take long until I found myself looking back just in case something has been creeping up behind me. Mood is evident from the visuals as the mission begins. Behind the grate is a moonlit woodland as rain heavily falls, while the only path forward is through eerie darkness. And this darkness doesn’t break up often with only a few instances of light sources. This is where the flare comes in handy as an essential tool for navigation. Ironically. The shadows are a thief’s best friend, but here it presents it as a fear. Something could very well be lurking there or it’s simply a figment of your imagination. You’ll never know unless you move forward. But using the flare can take you out of your comfort zone, throwing you into a situation where your position is revealed for all to see. There is nothing to defend yourself with beside the very flare you hold. It adds so much to the mood very effectively with so little, especially when the chilling ambience kicks in. 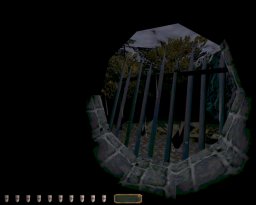 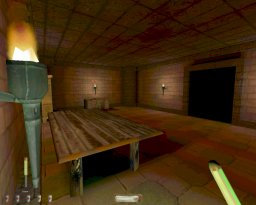 You’ll find yourself exploring tightly contained, underground locations, linear in layout and claustrophobic in places. Areas open up more as you progress further, only to give you more reason to fear the unknown as vulnerability increases. Visually it is moderate in design, not exactly detailed nor is too bare. This works well considering that the amount of darkness will surely hide most of the details, while the largest room gives off a suitable sense of grandness from its usage of blue hues and the right amount of light. Unfortunately, the mission is short and I could have definitely seen this going much further, adding more depth to the story. The final conflict is much too easy without so much of a problem, diminishing the aspect of fear here despite having such a good build up. More of a disappointment, but as a whole the mission works well as a horror, having a good amount of tension. 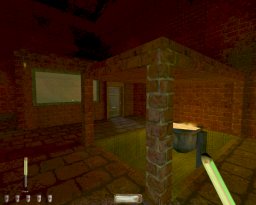 Conclusion
Effective horror themed mission that creates enough tension from the usage of darkness, fear of the unknown and vunerability. Although short, the mission has a good sense of build up for atmosphere.