Gameplay
This is a short modification that isn’t anything rememberable that comes across rather dull during play. A majority of the time you’ll be passing through very small maps doing simple puzzles or participating in very easy fights against either zombies or the Combine. The puzzles themselves aren’t exactly difficult to solve, rather straight forward and nothing entirely special leaving no satifaction as you progress further. The maps also lacks any ambient sounds throughout which makes the place seem far too quiet, the torch fires on the walls could have used crackling for example. As mentioned earlier, playing through this can be quite dull but it does have a few interest pieces here and there such as the wooden bridge puzzle or the last area.

Design
Average in most places throughout, except the last location which is the best visually compared to the previous levels, but nothing special overall. The design is very blocky structurally and lacks shape, a lot of constructions were badly made in a majority of the levels. The lighting is average, it does lack some mood and doesn’t look exactly great either in a majority of those areas as well, some places do have some moderate lighting that works but could be better. The short mod also uses some new models throughout which do fit the enviroment quite well, and something visually different to look at when pulling those levers or walking through the map.

Conclusion
Simple puzzles, easy fights in an average design set of short levels that can come across quite dull, but has a few nice moments. 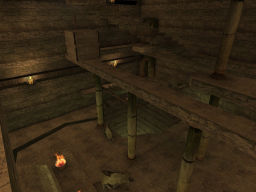 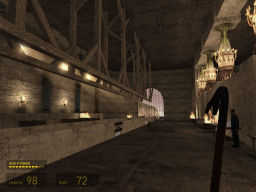