Gameplay
You take on the role as Adrian Shepard, needed to be taken out of stasis to do a job for the G-Man after the events at Black Mesa. This modifacation consists of five medium lengthed chapters each with a different setting to take venture through, while the gameplay consists of that found in the original game with a few nice effects here and there. There is a small mix of interior and exterior where the action takes place spread across the maps using elements already taken place in the original Half Life 2, but have a few nice additions and changes to make them a little different this time around. Some examples are the use of rollermines as they suddenly spawn on the roads when taking a drive, or the zombie infested areas. General flow between levels can be slow due to some large groups of combine soldiers and dull fights with them, especially during the second level. The experience is enjoyable but during the first few moments without any weapons and combine walking through their forcefields added a sort of epic, stealth feeling. Until ofcourse the crowbar was found. There should be enough ammo and health suppies throughout the modifacation, however I had a bit of trouble on the health side during the first two maps sometimes.

Design
Deffinitely some detailed enviroments throughout each of the maps, keeping a consistant balance within the setting. But some flaw here was the usage of many corridors, of course in different styles depending on the location but sometimes places lacked rooms. This can’t be said for all the maps though, especially the first and area with the large submarines. Structure throughout was decent, corridors used arched ceilings during some maps, ceilings in larger rooms had detail and the landscape with snow looked well made. One major complaint is the overuse of junk models such as barrels and other such items being scattered around the interior locations which gets boring after playing many other maps with similar filler attempts. Some of these do come in handy during the gameplay however, such as propane tanks for example. Locations were wide enough to venture through, nothing too tight and small and driving the vehicles on the roads never caused much problems. There were some design flaws such as in the first map, once out of the combine gates taking a left turn towards the woods stops at the skybox which looked odd. Lighting was moderate throughout out without any major complaints, bright enough in a majority of areas making flashlight usage to a minimum in larger areas. The last map however breaks from the typical styles found in the original game and creates something new, but unfortunatly affected by the corridor problems as mentioned ealier. An expanded version of this location with more rooms and places to explore would have done some major wonders. The texturing style however is nice.

Conclusion
Enjoyable gameplay which flows similar to that of the original game, with a few dull fights however. Five chapters in different locations. 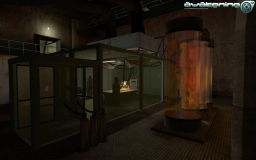 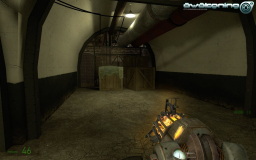 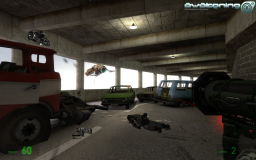 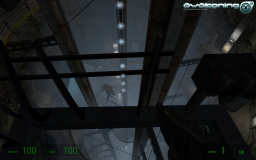