Story
Shantytown takes place in an imagined future reality where the earth has been largely overtaken by a jungle of poisonous fungus. Humanity has taken refuge in towering vertical cities protected by massive walls that spray fungicide into the jungle to keep it at bay. A heartless plutocracy controls these cities from the highest levels, while the poor and underprivileged live in squalid conditions in the lower levels. Our story takes place on the tenth level of one of these cities. Technology is more advanced than it is today, but it is only available to the wealthy people at the top. Most people in the city make do with run-down, dilapidated 21st century technology.

Gameplay
Like every other point and click game, you control your character by clicking on locations in the map and she will walk there. You can talk with people with options with what to say and do tasks for them. You can also examine, pick up and use objects to complete your tasks to get further in the game. You also have a robot that follows you called T.E.D who can help you with things such as freezing objects, using its magnet or using fire. Finding out what you must do and how you should do it isn’t much of a problem and fairly straight forward but you might get lost at times. The game also features some new voice acting to create a more unique world removing that Half Life 2 feel to it. It remains fun throughout but sometimes fustrating when your character runs back to where she was if you accidently click when the camera angle changes. There is also a bug near the characters house at the back, T.E.D gets stuck and you can’t use him anymore making it impossible to continue. This can be avoided by no going there as you dont ever need to, only the metal plate on the floor.

Design
Very detailed enviroment and the surround outskirts with all the giant mushrooms and other vegetation creates an immersive world. The buildings look run down and cheap due to the story and have been structured well with great texture choices. Lots of props are also used to help detail the areas but in a good way and placed logically. Other graphics, such as those in the bottom right hand corner are sharp, clear and look good as well as the text boxes. Personally, I didn’t like the look of the main character but everyone else’s reskins looked good.

Overall Conclusion
A fun and original yet short point and click mod, for the Source Engine. Goes to show what can be done. 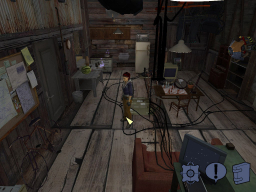 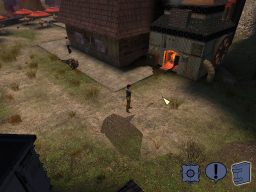 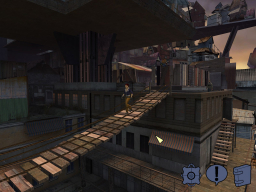 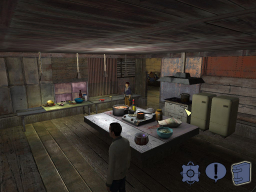