Gameplay
Very well balanced with the enemies, with plenty of tough battles throughout with some simpler fights with tougher enemies still posing a threat. Theres also a lot of respawns, sometimes after picking up a weapon, key or just walking by which adds more action to the map which won’t bore the player, since they are well planned out. Plenty of areas to explore in the map each with enough enemies to satisfy you through the map. Theres plenty of health about to last in the fights, especially ones with Shamblers. Theres tons of ammo around, so running out would be rare unless you aim is really bad. Map also has a few secret places which is a nice touch, especially after finding them when you most need them.

Design
The layout of the map is very tidy and neat and most of the map’s design repeats itself throughout the whole map which keeps it consistant and won’t look random. The map looks very good with the way details have been added and it doesn’t go over the top with the them. Texture choices are excellent and work very well with the structure of the map all aligned very well. The trimming and pillars are also made well with well picked textures.

Very well designed map with a good balance of enemies to keep the map action packed. 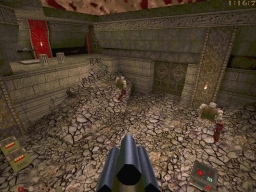 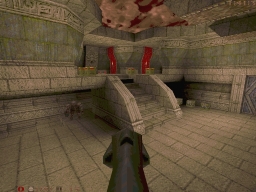