Be a Rebel Part One

The map is challenging, but not too hard, until later on into the map. You don’t spawn with a hev suit, so you can watch your health during the first battle. After entering the sewers, you get the crowbar, but can’t switch back to pistol. Although, the hev suit isn’t far away from there, it is very badly placed, and too much health next to it. Enemies in the first area were placed well though, but the zombies, weren’t in the small sewer. After that, the fights get a little messy with the combine, although possible. After jumping from the roof in some area, you then have to fight some gun ship which is in a very bad location. Then after that, you fight a strider behind you as the wall disapears, also in a terrible place to fight it. And the rebels get in the way here too, since this area is also tight.

Not a very good map, with bad design but with a lot of action, although placed badly. 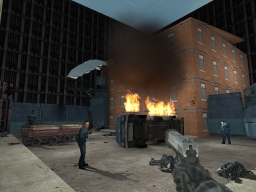