The gameplay is very fun and the mission is very interesting to follow with some scripted sequences throughout. As you develop throughout the map you learn what is going on which keeps you immersed with the level, which I find sometimes rare in Duke3D maps. There is surely enough ammo to survive your mission since my shotgun was nearly always full, and there is plenty of rockets for the bosses and commanders. But I didn’t know there was going to be a rocket launcher at the start and due to the boss I went straight to the underwater area, and relised in the elevator shafts that a wall needed destroyed. Anyway, plenty of health about and I didn’t die once in the map, but I lost a lot of health during the battles with bosses and newbeasts, however there’s enough health to keep going. Enemy placement is done well with plenty of respawns to either keep you shooting or to surprise you.

Texturing in this map has been done with very good care, and a lot of the textures work well with others. Merlijn has also used some of his own texture uses, to mix others together, or use certain parts of the texture which looks very good, and good example is the corridors underwater. Many palletes have been used throughout the map, to give some textures a better feel, or use, most have been done extremely well, but sometimes it can get a bit too colourful in the map, altho, a lot of reds have been used for blooded walls, in which looks good. There is a lot of sprite work throughout the map, such as furniture, uses on houses or either platforms on the “Loney Mountain” A lot of the spritework has been made good, but yet, too colourful in my opinion on some areas, such as the bridge to the main base. Other than that, some spritework is pretty good, and the use of other objects, such as plants etc, have been placed well. There are plenty of texture innovations and some very good ideas throughout the level, some really good example is the scripted helicopter scene, I won’t spoil it, if you’ve not played the map, but its is very unique, and never done in a Duke3D map before, and didn’t even use new cons to do it.

This is a great map, you do not want to miss out on it, great texturing although sometimes too colourful, good spritework, a good solid, mission like gameplay with some great innovations. 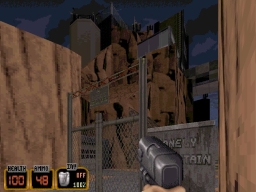 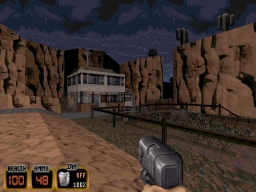