Introduction
To celebrate Duke3D’s birthday, members from Alejandro’s Mapping Center community gathered to make a short simple episode. Each map had to have the number 10 in it somewhere to be seen in 2D mode and had to be made in three days.

( Similar to my level – Simple Minded )

Keep on Surviving – By Geoffrey van Dijk
My favorite map out of the episode because it has very detailed yet simple design which looks very good. The gameplay is also fun and not tiresome at all. The fights are balanced well with good health and ammo amount too. The map strongly reminds me of a few Zdoom maps.

Attack! – By Maarten van Oostrum
Design is more simple than his latest work but still looks good. Gameplay in the first part is very easy but the second part is more of a challenge but possible. Plenty of health and ammo around to survive in this part.

The Lair of the Witch – By Iggy
The design is average throughout this one which looks good but nothing special. This is a small and simple part where he battles can be tricky but very possible with plenty of ammo and health to survive in but very tight areas.

JSDuke10th – By James Stanfield
My second favorite part. The design is reconisable to James’s styles from his CBP parts and Imagination World TC. I found the first part to be boring but the second area was very large scale and exciting. Especially those lights in the distance which added a lot of feeling to the area. Gameplay is tricky but easy to avoid the enemies too.

Lucky 13 – By Iggy
Iggy’s second part is a lot better than his first one. The map has better design and the gameplay has more excitement and challenge to

WG10 – By William Gee
After a second play through I managed to complete this one without cheating. The action is very difficult and ammo balance can run out fast if not careful. Design is reconisable to Williams nature style which looks fantastic with great use of textures and colours through out. Large open areas and cover to battle in makes the map fun to play except the really large hordes that respawn in.

Work on the Shop! – By Merlijn van Oostrum
The first part is challenging but the design isn’t as good as his other work although still good. The second part of the map however has is a very good ending for the episode as the battle is hard but easy to move in the open areas. Design in the second area is also top notch and the textures have been used well making the place look clean.

Overall Conclusion
Great episode made to celebrate Duke3D’s 10th birthday with some good quality maps with challenging gameplay. A must for any Duke fan. 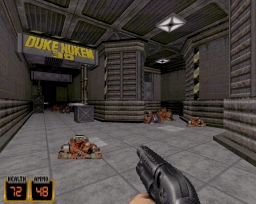 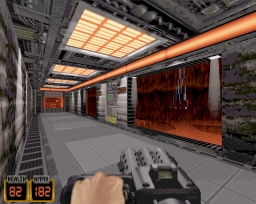 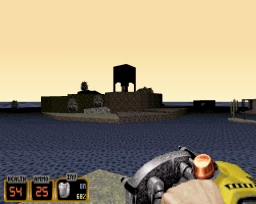 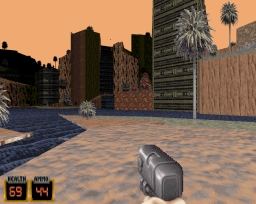