Another Big Base Attacked

Introduction
A fantastic release from one of the great mappers for Duke3D. This level was sure worth the wait after 2 years in development and truely a masterpiece.

Gameplay
The best part about the map. It starts as the story is told in the text file, and then you learn more as you progress on just like Red5 did. Although this map has more adventure in it and has a lot more ingame cutscenes and less view screens, which is a very nice addition to the map (make sure you have the .voc files in your Duke3D directory, since they are vital for the gameplay immersion) Enemies posed a challenge, a little less ammo to fight them with but still had a balanced gameplay. The map had a bit of replay value also.

Enemy placement is good, but Maarten should have placed the Lizmen a little later into the level since you only had a pistol after all. There were a lot of enemies throughout this map, especially after the blue key card. As I got outside in the map I had to tricked the battlelord into going near the grated area so I can go furthur without dying due to low health. But that was a mistake since I needed to go back and get the blue key card anyway. Item placement was good, not a lot of ammo though since I ran out of it a lot pretty fast and I’m sure an EDF base would have more scattered around. Or even have some more ammo storage areas.

Design
The texturing in this map was very good, but not really to my tastes, yet it was done well here especially in the cargo room, which room design I liked the most. But overall, the texturing is good with a few areas which I didn’t like, such as the metal floor texture around a curve in the first screen, or some of the ceiling textures.

A lot of sprite work has been used in this map which was constructed out well and some very unique “Spritework Doom-Doors” which is the best phrase to explain them, very clever and unique since no one else managed to come up with the idea. The map is full of spritework, but mainly for detailing walls. rooms and to make catwalks/balconies. The sprite work outside for the hole in the floor was also decent as it was more triangular than square.

Overall and Conclusion
A top-notch map worth playing. Will keep you entertained throughout the map with a little bit too less of ammo but you can still survive. 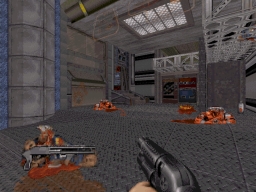 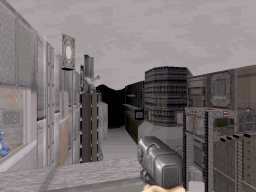 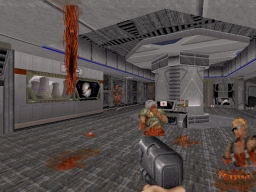 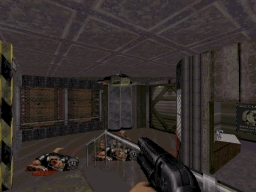