Lots of tension throughout with a very interesting storyline that progresses and you learn more through playing the mod. Theres lots of tasks to be done to complete the mod. For example, you must get the yellow card to go down one elevator, but you can’t get it due to contamination, but you can’t get rid of it without the software disk and so on, adding excitement to it. Theres a lot of hordes in the mod throughout too, but once these are wiped out, other enemies don’t spawn to make it harder so some places feel too lonely. Theres loads of ammo and health about, so chances of running out or dying is low, unless you are in the lobby area. The feel to the mod is well done too, it feels like a new game rather than a Doom mod. No new enemies though, but a new design to the hand on your weapons.

Top notch, using lots of slopes which look nice, and textures that suit the location. Texturing has been aligned well and work with the map’s structure. The layout of the maps are good and are not too confusing. Sometimes you can get lost, but once you get used to it, you know where everything is. The mod doesn’t have levels, just different floors of the ship. It works the same way as Half Life with the level transitions, so whatever you did in one floor, when you return with a key or something, the condition is the same. Also, the same goes for doing something on one floor such as opening the hanger doors to let contamination out will effect floors that have doors locked due to it. This adds a lot immersive gameplay. Theres a lot of big rooms for big battles such as the lobby and hanger which is very useful. Lighting is good in some places, others great.

One of the greatest mods out for ZDoom yet. 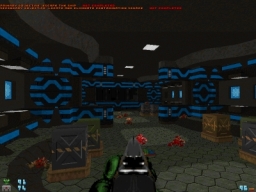 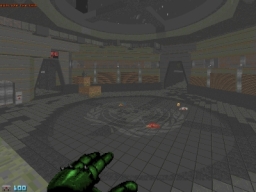