Just another one of those facilities currently dealing with an alien invasion, this time a research station located somewhere in the Californian desert running some mysterious experiments referring to a plant entity titled “The Root”. But the answers to those questions can wait another day. Duke infiltrates the facility after hiding inside a truck with his trusty Chaingun Cannon in hand.

ROOT is an action heavy romp set within a fairly standard facility theme, providing players with nothing besides a chaingun to fight against numerous Troopers and Enforcers. This will be your weapon of choice, or rather the only firearm available for quite some time. First couple of encounters definitely start off with a bang, facing off against groups of fodder while Enforcers whittle away your health, before settling down on this congestion once we head indoors. Enemy counts do remain high but don’t depart much from using the same two aliens up until the halfway point. Health distribution can be cruel at the worst of times offering pitiful band aids, forcing players to take extra care to avoid rapid hitscan. Thankfully drinking fountains can be found early to help remedy any emergencies. Ammunition however wasn’t a problem for me even if it meant darting in between enemies to snatch up some caches before resuming the fight, which helped to increase tension during those scenarios. Other weapon types do eventually become available except by that point they show up in high volume. The majority of ROOT takes place indoors so cover is plentiful to reduce damage taken from Enforcers. However space can feel limited which wouldn’t be a big problem if certain geometry and side decorations were blocked off to stop Duke from hopping all over the place. 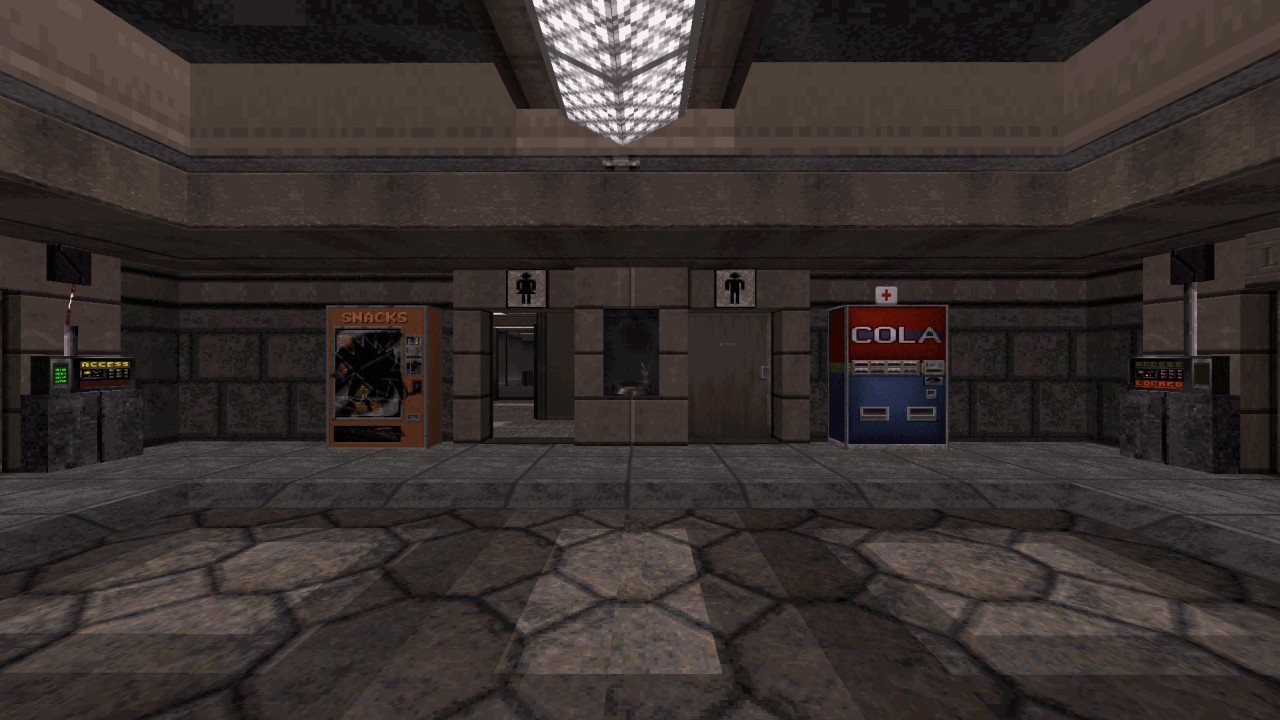 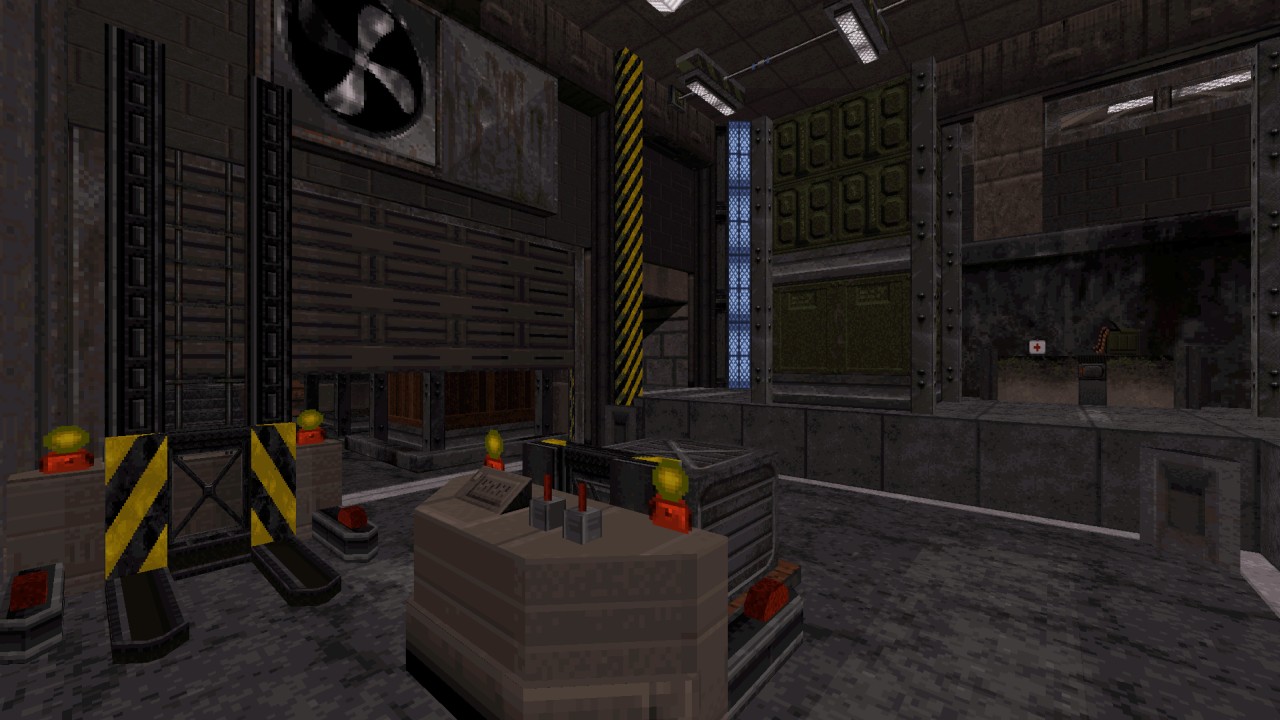 Speaking of which the level sure looks appealing, perhaps not the most original of designs considering its theme but still does an excellent job which often reminded me of levels by Alejandro Glavic, such as Military Madness or EDF Secret Base. CruX also clearly pays close attention to detail, thinking about how a facility like this functions with the visuals reflecting that through choice of furnishings and other smaller decorations. I also love the purposeful use of flat sprites mere inches from a wall to simply cast a shadow behind them, doing so much with so little. ROOT’s colour scheme is made up from lots of tan and brown, but done through a wide texture variation to prevent repetition. Many of these combinations blend naturally along with other neat tricks pulled here and there, one example includes a window texture functioning as a table edge. Besides office blocks the level also offers some underground industrial sections and a clean white research centre located somewhere unexpected. There’s little not to like about the visual style despite being a tight squeeze to navigate through. Shows potential if CruX were to open up these spaces with gameplay in mind for any future projects. 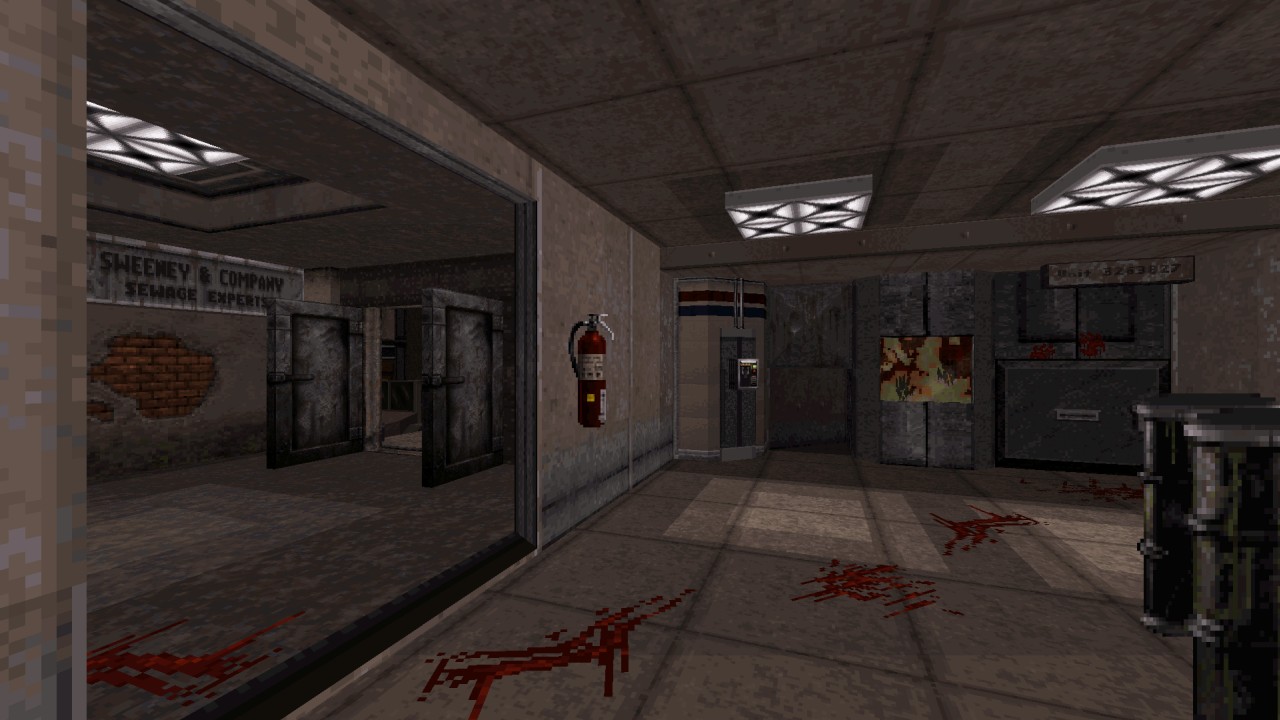 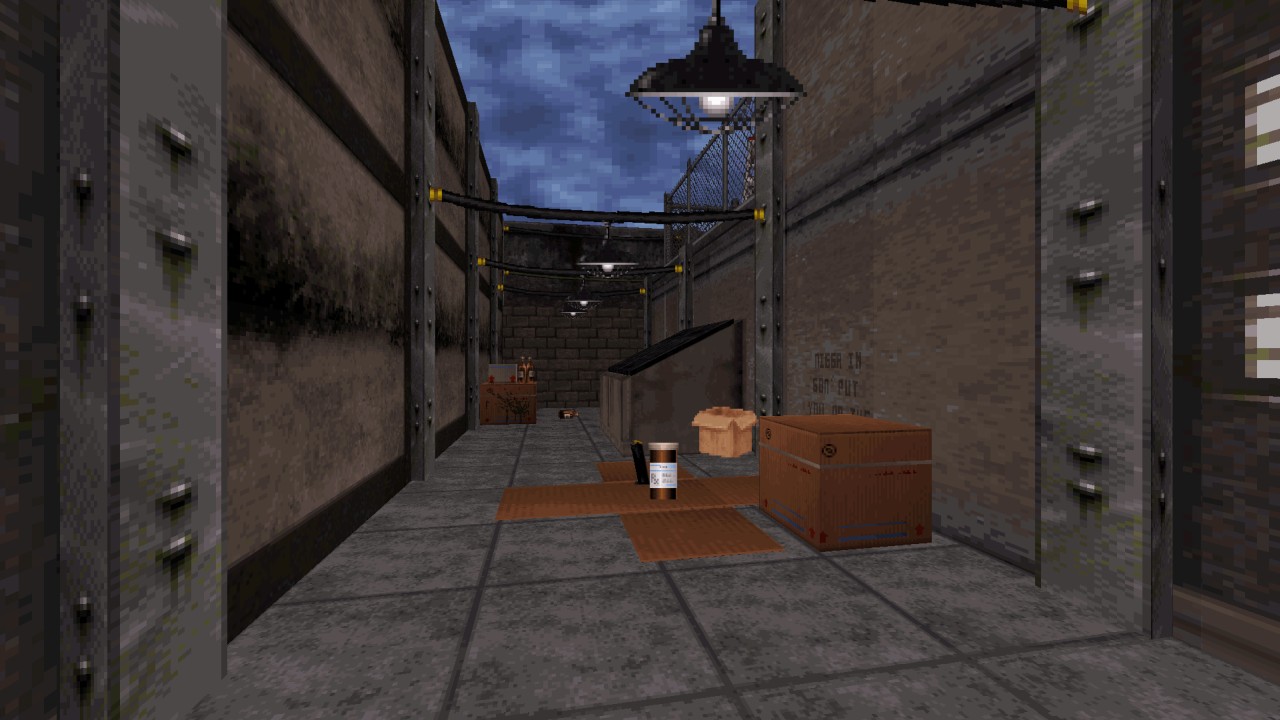 Progression is straight forward so long as players constantly explore new areas they’ve gained access to and for the most part can be quite linear. However it turns out the blue key card isn’t actually vital to move forward since there exists an alternate route while the main path is less conventional through explosive means. This changes the usual pacing players expect, a refreshing one no doubt but might throw others off course. CruX ensures they can’t mess up too badly either by spawning two Fat Commanders nearby if our pipebombs were already expended. Unfortunately ROOT should have increased enemy variation sooner since combat did become stale after their positioning grew increasingly predictable with every step. Either an Enforcer or Trooper can be found somewhere just beyond the next corner waiting to ambush us too often to pose any legitimate threat. Not to say ROOT doesn’t have its share of surprises, they just happened too infrequently in comparison. That transition onto a moonbase helped to shake things up and I liked having to remember a password revealed long before we could apply it very similar to Duke3D’s “Area 51”. Otherwise my only other concern that there could have been more routes back into earlier sections especially in places we can see into those, whether to grab left over supplies or to create some interconnectivity. Another relatively minor situation is after acquiring the blue key card, nothing happens when backtracking to its access point, where as a functional switch on the opposite side for the nearby doors could have cut down on unnecessary downtime.

Enemy variation might be lacking during the early stages and level geometry can be quite tight to navigate through, ROOT otherwise offers an action packed adventure through a great looking research facility with close attention to detail. If CruX opens up these interior spaces with gameplay in mind, polish off the decoration collision as well as adding shortcuts into older sections there will be definite improvements for any future releases.