After the Russian Army took control over Chernarus, Tomas Cerny and best friend Dimitri form together a resistance. Their group is able to cause harm at first, but little by little everything began crumbling around them until Tomas loses everything he cares for. In his darkest hour he is contacted by an agent from U.S. Intelligence to help begin the fight anew.

THE BLACK LANDS will have players taking the role of Tomas who strives to continue forward as a flame within him reignites once again to fight against the invading Russians and claim back Chernarus. Starting from the ground up as a simple two man squad lacking in weapons and supplies, they must rely on using whatever means they can in order to achieve any results they want and slowly pave their future toward building up an acknowledgeable resistance force, striking back harder than ever before. Having a total of 19 playable missions, this was a campaign I found myself sinking several hours into over a few weeks before reaching the finale. Definitely a longer run than both official Harvest Red and Operation Arrowhead campaigns combined. Each individual mission on their own is incredibly in-depth and will take up a large portion of this time as a result. Also scattered about is a number of cutscenes and conversations which will help progress story, develop characters and setting the scene. But unlike a previous release from Undeceived, “For the Life of a Friend“, there is a much higher priority towards gameplay than story telling.

Despite having a strong abundance of cutscenes and conversations, both areas are handled well enough to develop specific plot lines without throwing any sudden interferences to player actions. These scenes are usually found during the start or end of a mission and occasionally appear midway as a transition onto a new act. Their main use is limited to important scenes for establishing drama and allows dialogue between characters feel dynamic through incredible camera work, spot on timing and suitable animation choices. Not once did I feel a scene was wasting time unnecessarily with annoyances like long pauses or forcing me to question their point. Now due to a lack of voice acting all spoken dialogue must be read and will therefore only take place during moments of peace or while travelling across long stretches. Whereas when conflict against opposition is within reach, these are avoided as not to let players miss out on crucial details and character interaction, especially since the chat log doesn’t keep track of them. My only pet peeve is when conversations seem padded in spots with pointless cursing and long winded discussions. Another minor annoyance is that the Chernarussian characters tend to speak believable enough, but when the U.S. side speak, they come across as stereotypical or movie-like in comparison. 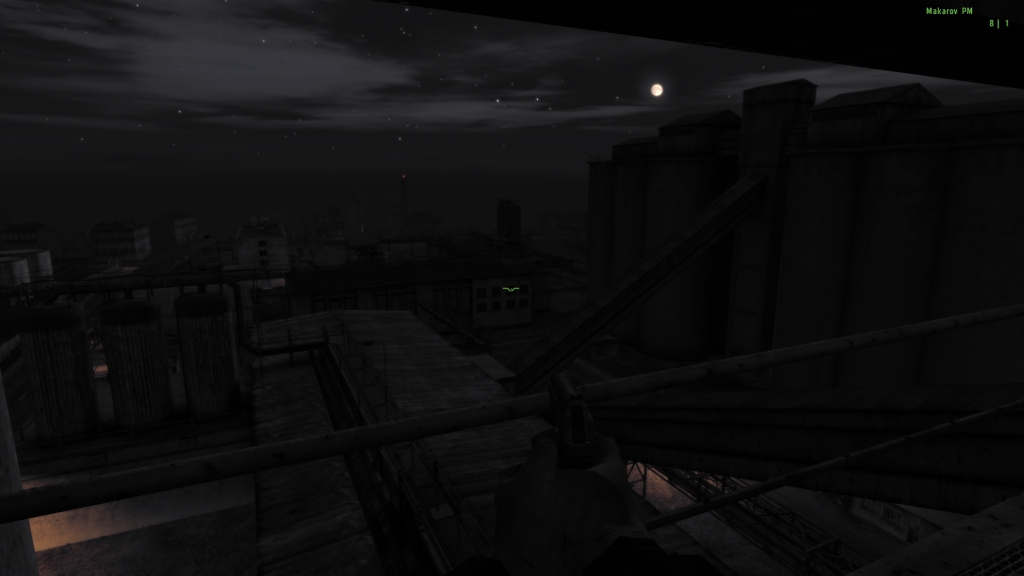 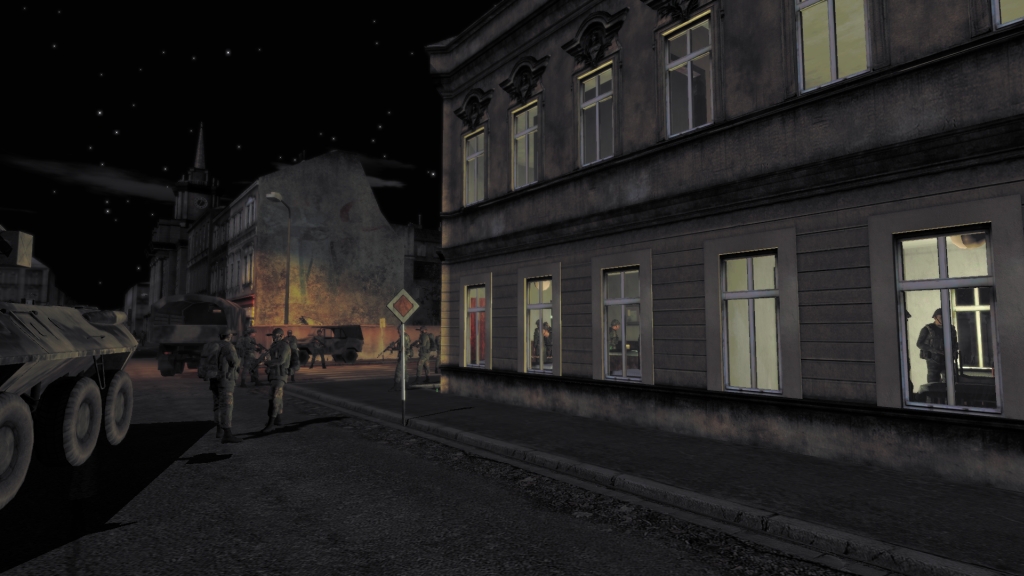 Because of a high attention to detail and varied set of tasks packed into them, never does one mission feel too similar to another coming before it, presenting a wide array of different scenarios for players each time. Gameplay is then dictated by the core objectives and theme they depict, offering stealth; undercover operations, sabotaging key areas and general assault on an enemy position. Even when a situation appears to be going according to plan, there will still be all manner of new events and sudden problems arising during the mission’s course requiring immediate calling to attention. These don’t always have a negative significance however and can include simple extensions to current goals which will benefit future plans for the resistance. Because of these twists and turns rearing their head at inconsistent intervals, mission sessions do tend to stick around longer than initially considered judging from the briefing screen alone, and yet they continue to remain entertaining despite this.

Immersion is an all time high throughout THE BLACK LANDS, involving not only combative aspects of the invasion but also remembering that the world will still continue to breathe on despite an unwelcome Russian presence. People will go about their daily lives and then remain at home during the evening curfew. While this simulation does feel very scripted it does help regardless to feel more apart of this setting. Take for example the entire prologue stages from “Martin’s List” which does exactly that. Our first task was to wait for our transportation to arrive to easily slip into another town without concern. Standing around may not sound particularly exciting, but small touches are planted to liven up the environment around us does make up for that. This varies from another woman appearing to wait at the same bus stop, to a passing car blaring out loud, heavy metal as it cruises through town. “Inner Abscess” introduces a mysterious element approaching its sense of immersion from another angle. In an early morning fog, strange occurrences begin to unfold and everyone around me tosses out questions in sync with my own thoughts trying to establish what might be going on. It felt as if I were actually there and wanted to find out the answers. 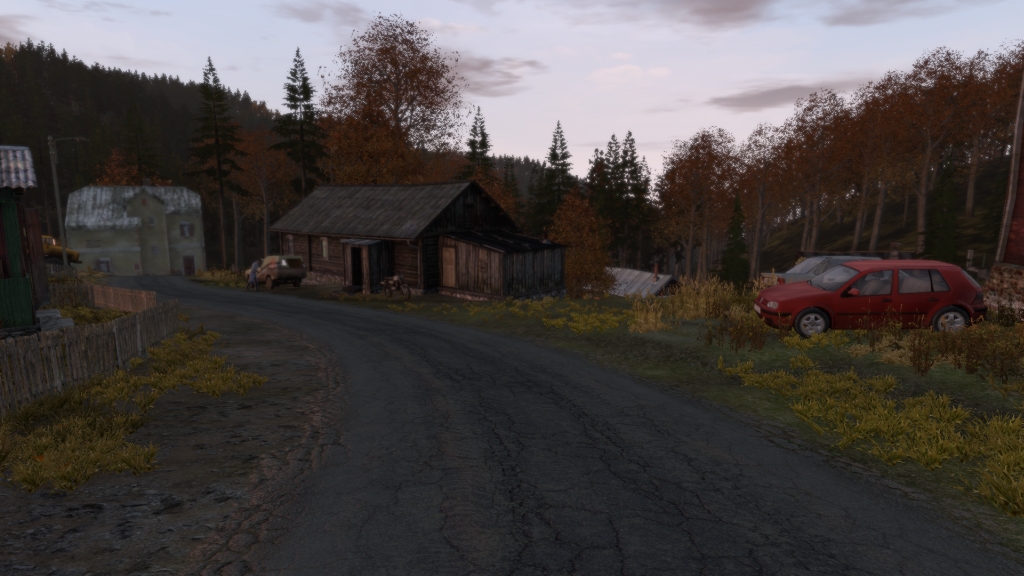 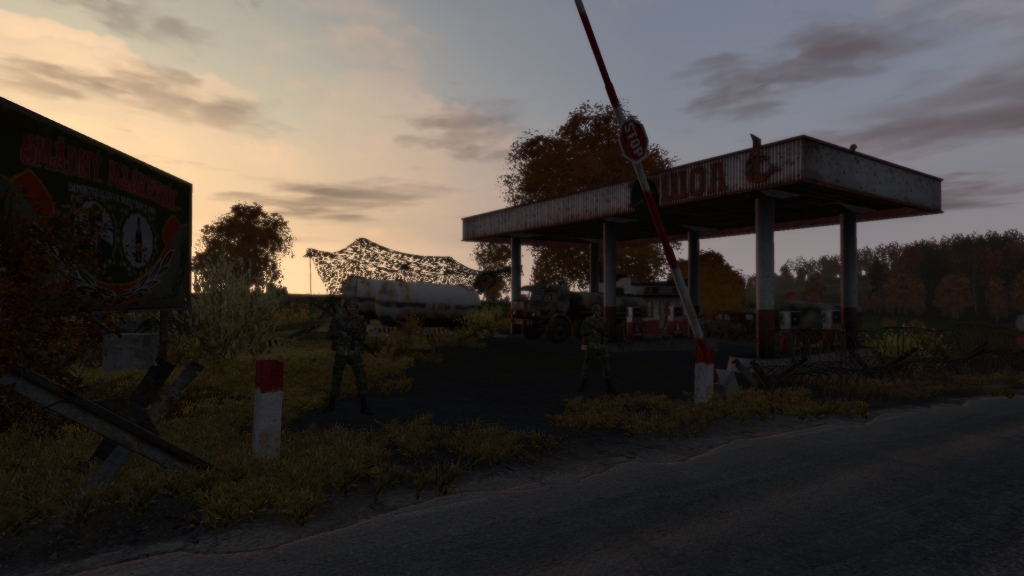 There was one mission I found myself having trouble figuring out the best course of action, often restarting to attempt alternate methods. “Setting Up Time” is the prominent free roam mission in which the Russians will not attack unless Tomas is found equipped with a weapon or trespassing. Our main objective was to gather medical supplies by stealing them from a Russian encampment holding up near an old barn, along with a couple of minor and optional tasks along the way. I couldn’t quite grab the supplies as it was probably intended, eventually resorting to a battle of attrition instead. In the end I only gave myself more trouble than needed despite leaving the supply run till last. Attacking the barn itself is difficult enough with an enemy APC roaming its perimeter and lacking any decent firepower. Even upon successful destruction of said APC with a well placed satchel charge is met with an arrival of another four heavy tanks and barrage of infantry as if they have a sixth sense to my location. Rushing in there to grab the supplies all while protecting Sergej and then getting back out alive in one consistent flow is by no means an easy feat. The barn is heavily guarded and their counter attack is too sudden. Best chance I had was to patiently pick off targets one by one, move positions and wait for their armoured vehicles to patrol elsewhere before diving in. Without any doubt though this created a ton of suspense, especially hearing that low drone of vibrations faintly approaching from the distance, increasingly nearing closer and closer.

On the same note, tension is another big factor which tends to creep in during certain missions only involving the player with one other team member. The sniping orientated sniping mission, “Petrovka Strike”, almost creates a similar feeling by only allowing one chance to shoot our intended target or fail the operation. That of course assumes acquisition of said sniper rifle even works out in the first place. Even upon a successful kill, the mission’s tone will shift with Russian troops going on high alert trying to make amends. This scenario is further enhanced when a thick fog settles in, rain hammering down and being told the situation elsewhere has turned grim and no idea what to expect on arrival. After having sabotaged a target during “Martin’s List” I found myself being followed by a helicopter surveying the surrounding area and an APC in close pursuit. Unfortunately my partner got clipped by a few rounds, falling down wounded. Not wanting to leave anyone behind, I chose to carry him and rush through the dark forest instead, hoping that we won’t be found or run into infantry. This entire time I was constantly on edge, choosing a longer but safer route back to camp. 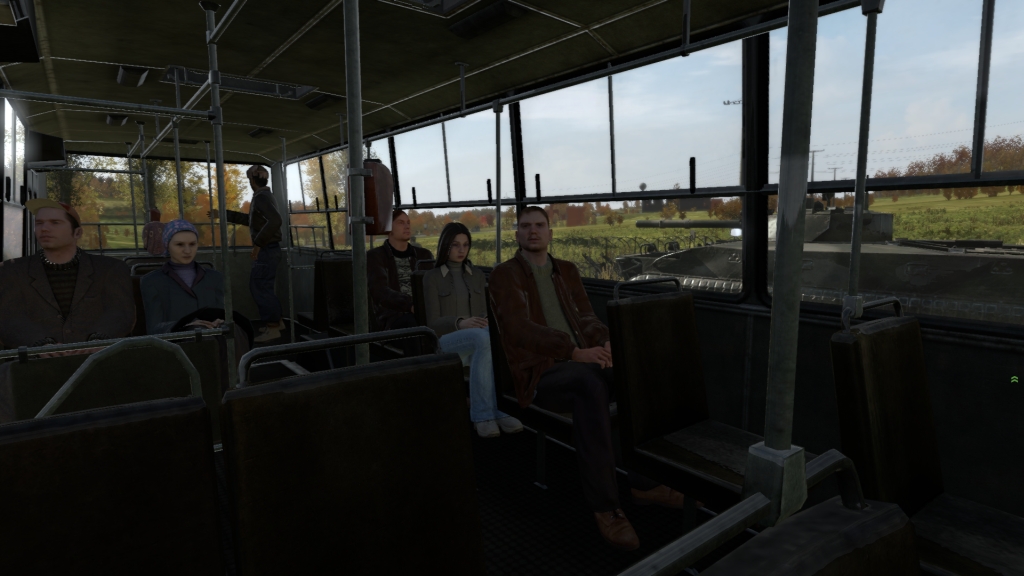 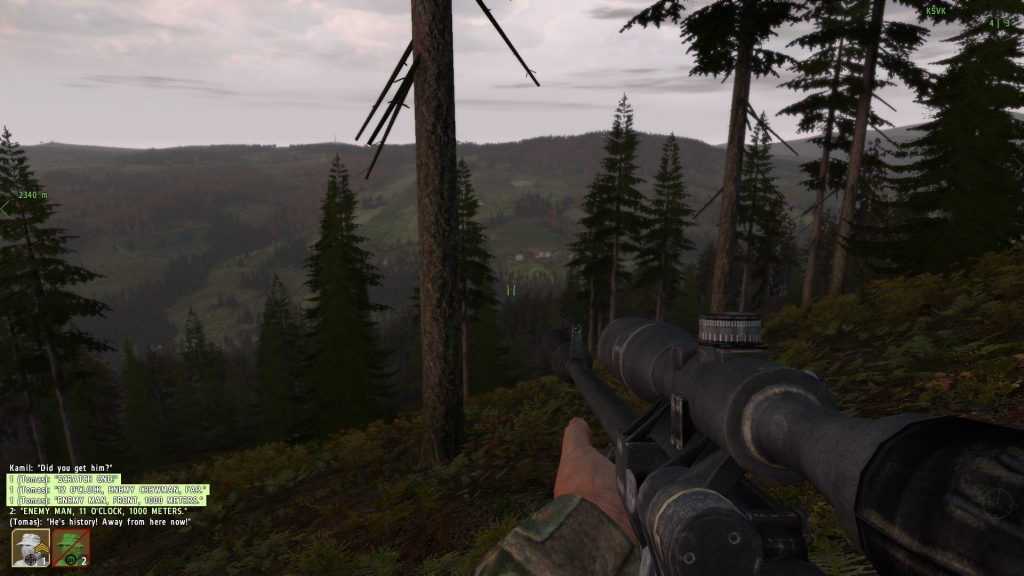 Many stealth missions dotted around the campaign have their fair share of immersive and incredibly tense gameplay for good reason, sneaking around in darkness hoping not to be discovered while Russians attempt to wind down and relax around fires or patrolling through chilly city streets during curfew keeping a watch out for rule breakers. The second mission “Awakening” honestly had me biting my nails the entire time while weaving between buildings and darting across the empty roads of Chernogorsk. I managed to botch up one attempt after entering a factory building thinking it was a safe detour, only to be gunned down from the opposite exit seconds later. Upon reaching a power plant I decided to ascend its rooftop and get a bearing over my surroundings first, pinpointing any dangerous routes, only to notice a small group of infantry creeping nearby with their sights up, assuming I must have been caught climbing the ladder. Instead they headed off in another direction but I remained still, startled, ensuring it was safe enough to resume to the appointed location.

Now stealth in ARMA 2 almost guarantees frustration considering the nature of that game, but fortunately it works surprisingly well. Line of sight and enemy positioning appear to be a large factor here, it simply boils down to timing every movement, using cover wisely and remaining quiet. Not that it means instant failure if players are exposed for even a fraction of a second either. In some cases taking out a target using silenced weapons might be warranted and a viable choice to make without alerting every other guard. Stealth then becomes an engaging activity with little hair pulling involved, but also varied each time allowing the next one more interesting to play. Toward its finale stretches of the campaign provides a stealth mission where players must switch between two characters; one used to distract guards head on and another to sneak up behind and knock them unconscious. While not quite as tense as earlier scenarios because of this, I still had fun figuring out which guard should be distracted and where next to make my move. 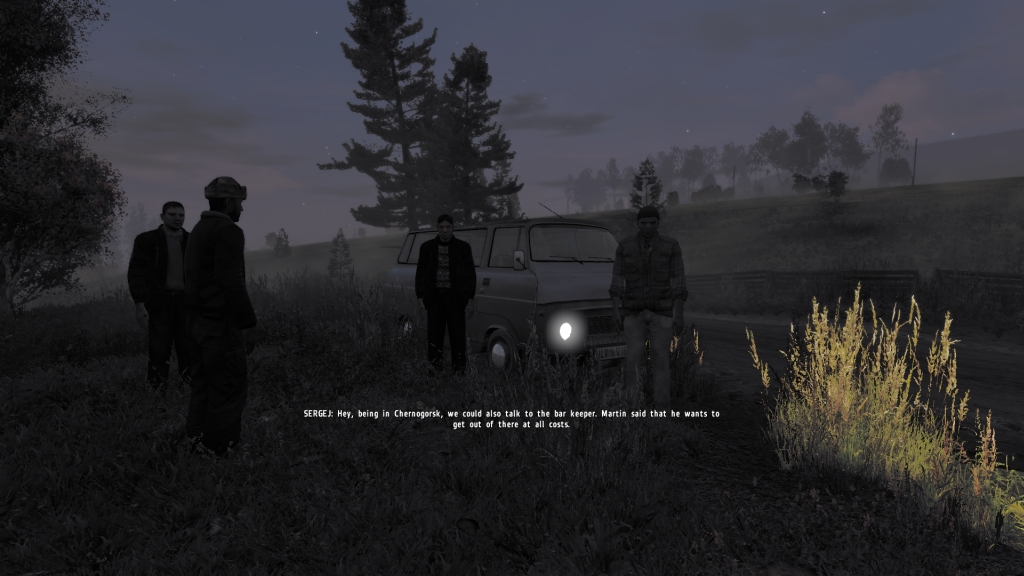 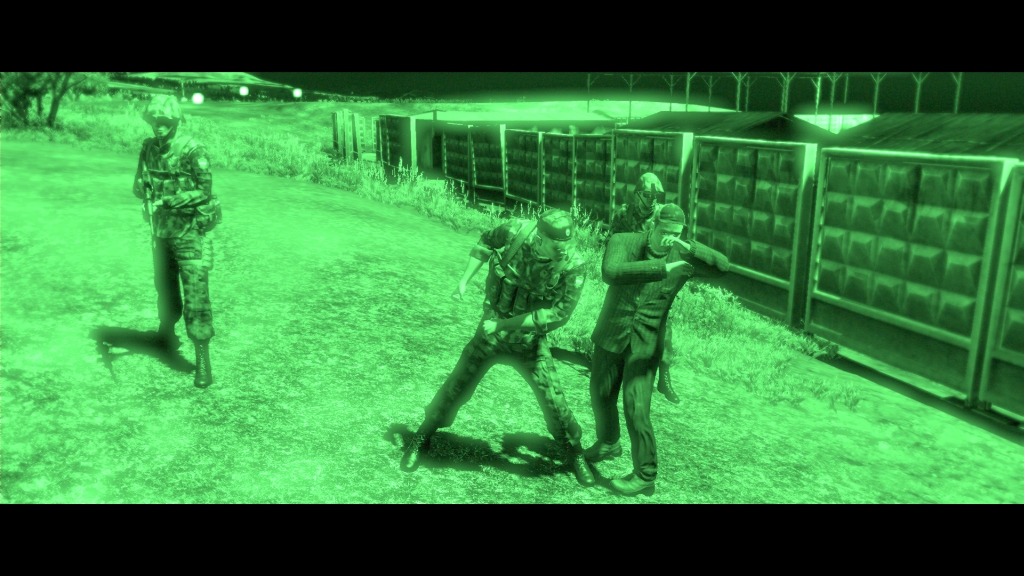 Having enjoyed this campaign immensely, there is still a considerable amount of content I’ve held back on covering in more depth since I don’t wish spoil any further what I feel is an experience best played. Otherwise if anything else is worth mentioning, the first mission is a weak starting point after numerous cutscenes because it doesn’t seem to offer much besides traversing the wilderness to a specific destination and doing nothing more. Sure there is an option to turn around and head back to the crime scene. Beyond that though, its not worth the risk getting involve inany fights and I couldn’t find other aspects that might be hidden. Every other mission is however a lengthy and in-depth experience, THE BLACK LANDS is engaging, challenging and varied right through to the end and once I started to feel satisfied, things then begun to tie up its loose ends before reaching a finale. This campaign is well worth your time.