TREFINRY was first intended to be apart of a community project named, The Shores of ZDoom, but instead Tormentor decided to release his addition as a standalone map for certain reasons, giving us a remake of the original E2M3 found in Ultimate Doom.

His version of Refinery prefers to depict a dark and grim flavour not only limited towards its chosen visual style, but also edging into the core gameplay itself. Unlike a typical Doom experience there is a larger focus on managing ammo and health supplies with care, ensuring that each shot counts or otherwise fall prey swiftly. Ammo isn’t a huge problem in the long run if players are cautious but there can be scenarios where this becomes potentially dangerous. Most enemy encounters tend to remain on a horizontal plane with only a few exceptions and don’t exactly provide a great deal of memorable fights or sudden surprises either. Because of this survival based playstyle, TREFINRY may not be suitable to everyone out there if they much prefer an action orientated romp. Ironically as a bonus upon, the level will restart itself with an alternative offering just that, increasing both enemy and supply ratios to match this change in style along with other differences to put a fresh spin on level progression. 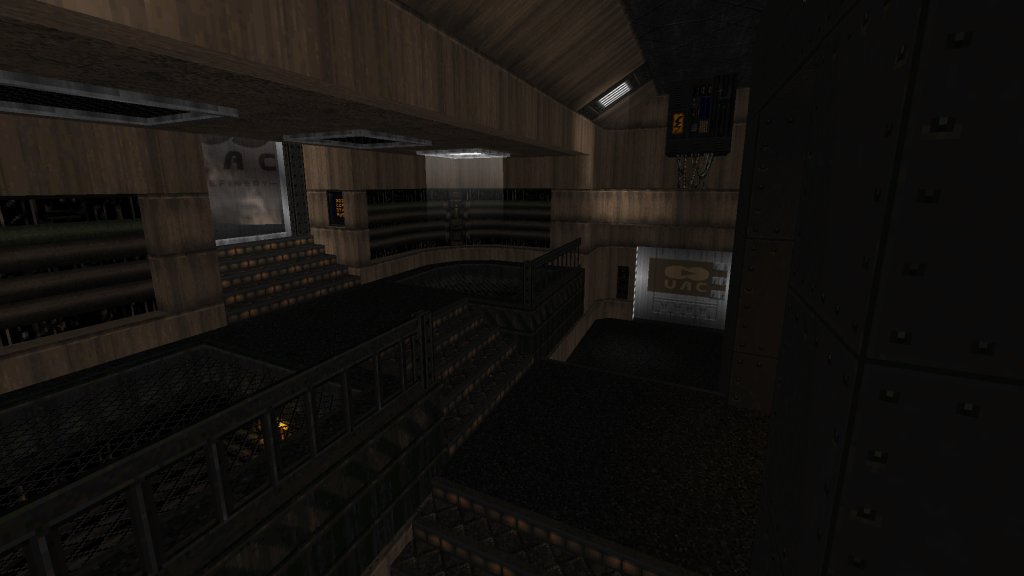 Being a remake, how well does it succeed at being both a faithful recreation while offering players something fresh? Quite a decent job in fact by taking familiar locations and expanding upon them in scale and purpose, all while keeping a majority of its layout intact. Though changes have been made and a significant aspect was trading away the strangely bizarre deformations of a normal environment for a more standard blend of hell with its stone, lava and fleshy set pieces. Visual presentation does not shy away from taking advantage of engine features to create varied scenery. Detail is practically everywhere that can be seen, putting an emphasis on its core UAC base theme with an abundance of computer terminals, light fixtures and plumbing. The large flooded room with that collapsed walkway especially looks great and I also enjoyed discovering those subtle touches of broken walls revealing a demonic pillar behind them which have been dotted about the place. Ambience tends to remain dark with little contrast to lighting, attempting to push a focus toward horror themes especially evident when approaching hellish ruins and hallways formed from flesh.

Included is a wide array of custom creatures provoking me with mixed thoughts for their addition. Many of them seem like they have been hammered in to feel more at home with this darker style but don’t quite create a uniformity amongst each other, such as Vores, flesh tentacles, or those bouncing mists of darkness. All these varied enemy types along with the intended gameplay also detract from the pacing at times and as a result I had a difficult time being truly engaged with the combat. Another unfortunate flaw were the new zombie grunt variants limiting some enjoyment during these conflicts. Amongst them are Auto-Shotgunners, Quad-Shotgunners, some packing rocket launchers and more. During one frustrating situation I found myself already low on health due to limited supplies and had to go up against three opponents using automatic shotguns. This forced me to employ quick shoot-and-hide tactics which would work relatively well against any other hitscan based enemy. However here I consistently found myself being shot the instant I reveal even a fraction of myself and barely any time to retreat back into cover before that finishing blow half a second later. While I admit that providing these variants on old enemies are a welcome change, these particular guys came across as a little overpowered with their buffed up firepower for my tastes. To a degree some were less annoying than others.

TREFINRY offers a well presented remake of E2M3, expanding on the original map in many ways with larger, more detailed environments. Gameplay is limited on supplies and focuses on players managing their resources carefully which might not suit everyone’s tastes. Couldn’t engage entirely in the combat and instead found that many choices for new enemies tend to detract from the overall experience.

Changing skill level in the console from anything other than zero, e.g. skill 1 and starting a new game will also allow players to jump straight into the alternative action orientated version it if they cannot enjoy the original.