Monstrosities are lurking everywhere and there is only one way out of the base, but three keys are needed and these have been scattered about. Hunt them down while clearing out all demonic, secure the base and live to tell another tale.

POLYGON has only one primary objective for players to achieve and that is to locate all three keys that are required to unlock a path to the exit. As for which order to get them though is entirely up for grabs, making this one a non-linear experience. With there being so many interconnected areas and hallways, getting lost while discovering new places will be a core part of gameplay which will be useful for gaining better firepower as well as proceeding further ahead. It is not always obvious where the next step closer to a key may be, but distinctive looking locations help with navigating around. These items are not hidden somewhere obscure either, instead seen sitting on a ledge somewhere until a proper route is established to grab one. Doing so may involve a series of switch hunting, but some of these might not be too clear in certain spots as to what has been activated. The only other obstacles standing in the way will of course be the hostile local residents not liking your presence here. 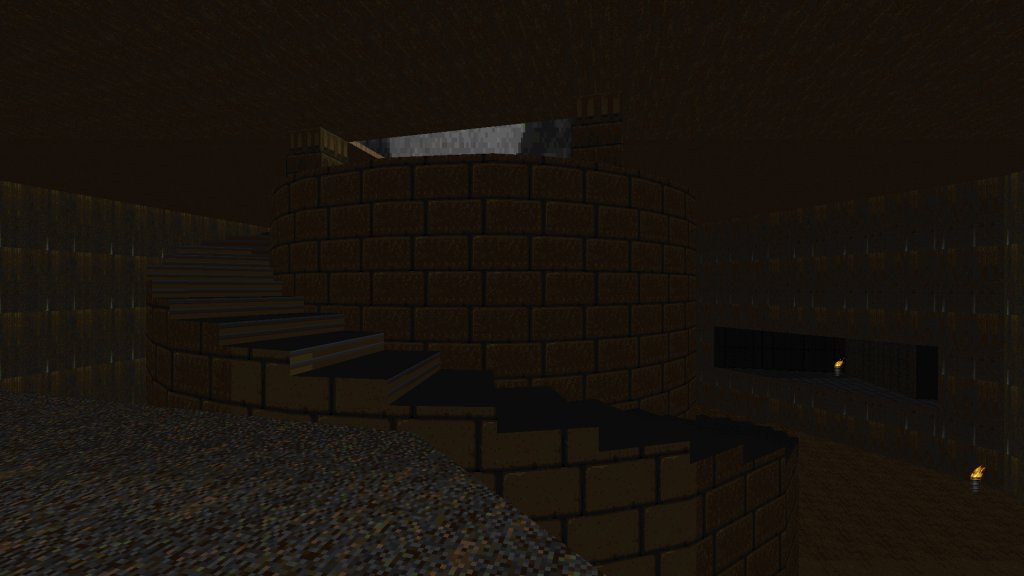 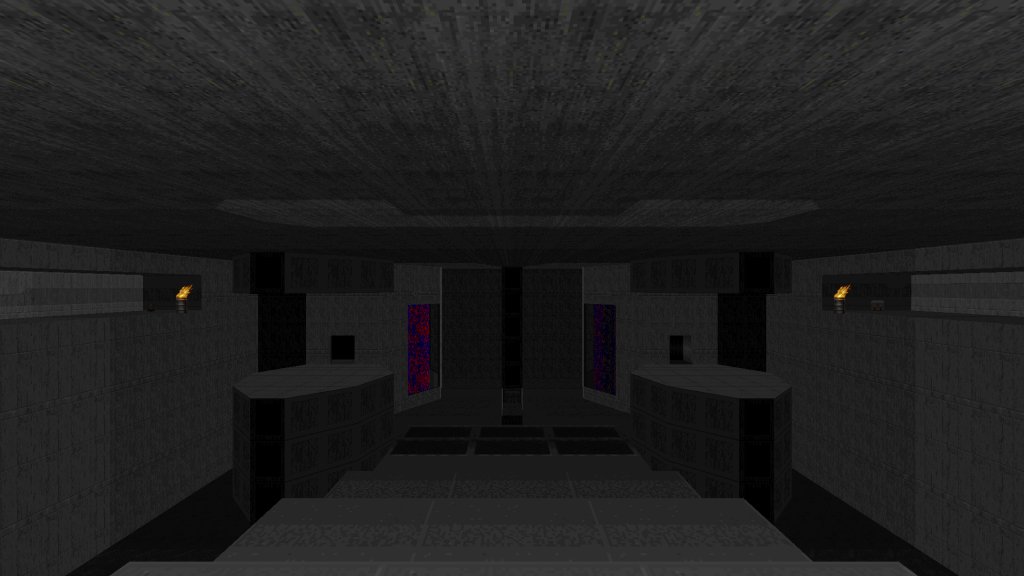 Design uses a base theme but remains varied, often changing up texture schemes to create these distinctive, easily recognisable locations using browns, greys or greens, yet still manages to keep a consistency while doing so. Structuring too doesn’t remain sterile by constantly twisting and turning, raising and lowering. Rooms will never appear too flat from either a height or shape perspective, then strong shading used as a final spot of depth. Outdoor sections are also thrown about to break up having many interiors along with a few windows looking out toward these to open up the level. There is very little to complain about regarding visuals, even texture alignment is tidy and trimmed off well. If anything comes across as odd, it would be a large brown room with a circular brick staircase as a central focus. Even so this barely distracts from the overall solid design nor could it be considered much of a negative either, since similar locations could have some influence from Episode Two where Hell is showing minor signs of taking over in spots with such constructions. 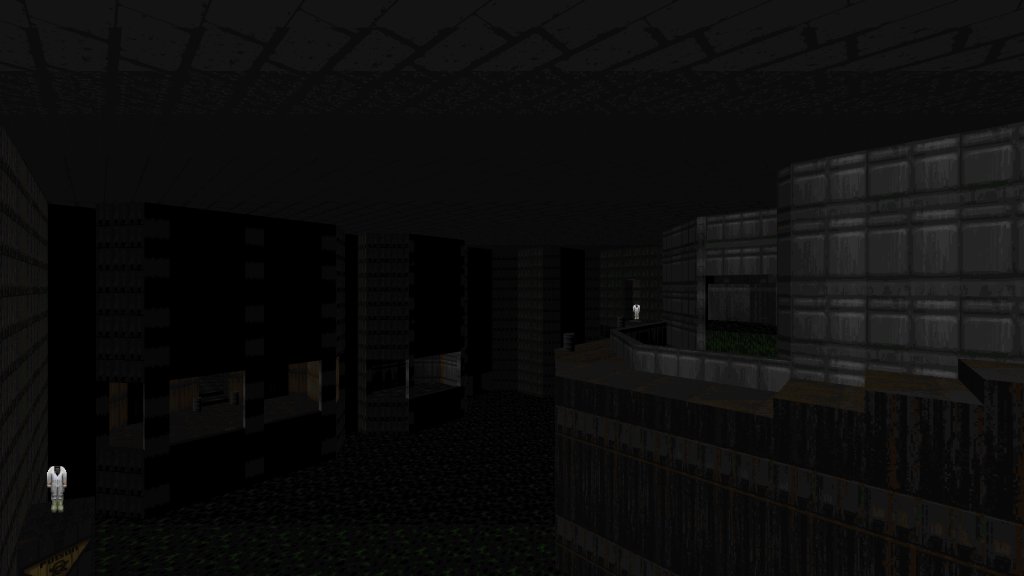 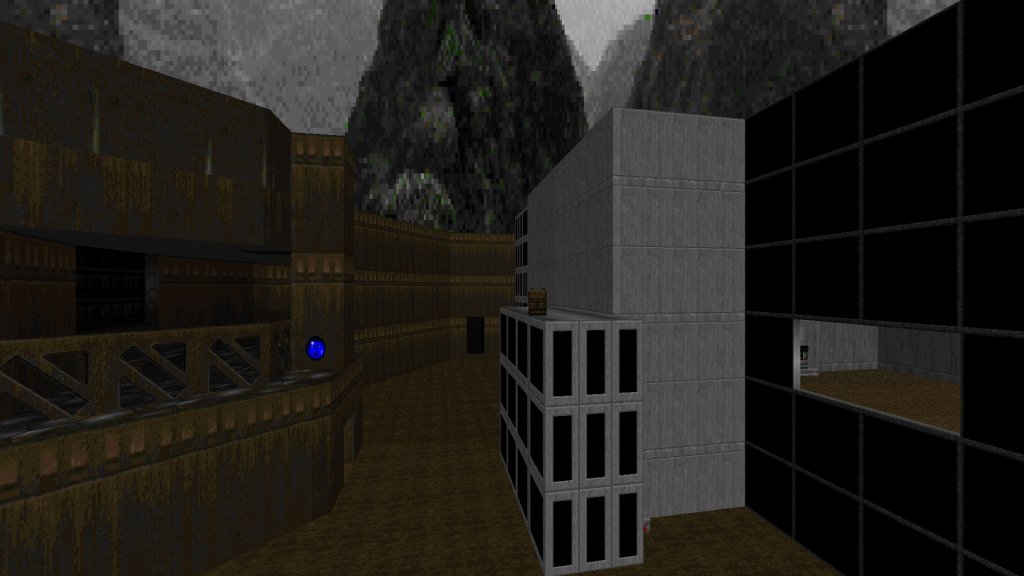 I chose to play this one on UV difficulty, not an option I choose often at all either, but on this occasion simply because I wanted the extra enemy encounter variation since HMP is limited to those only found in the first Doom and nothing more. Combat can then be tough as nails with a large number of Sergeants, Chaingunners and limited health supplies. Even a mere scratch is enough to be cause for concern. Hitscan types are used effectively to keep players on edge, throwing several at once in small hallways, or a few lurking at distant windows and ledges. Other enemies aren’t too much of a problem in comparison, so having health being chipped away can get annoying at times. Thankfully due to the nature of gameplay allows for some breaks by taking a different route to try your luck there instead. The more dangerous situations I had were having Revenants breathing down my neck while already close to death. Spent a majority of the experience below half health, but then again I am not yet well versed with playing on UV at the time of writing this.

The interconnectivity and non-linear nature toward gameplay in POLYGON allows players to progress at their own pace and choose which places to tackle first. Ultra Violence offers the most enemy variation and can be tough as nails with the large number of hitscan based foes and limited health supplies.