After narrowly escaping the great Bastion of the Underworld, you find yourself wandering for days in the desolate uplands of the Marcher Vale. As you approach the source of a fell wind, the distant shrieks of elder demons warns you that another Bastion looms, one even older and greater than the last.

After a short climb through the rocky passage awaits a breathtaking view outside just beyond the exit, as one gazes over the scenery with an imposing fortress towering proudly amongst a dead and barren landscape. The curved road winding toward its entrance beckons all of those who dare wish to enter. Much like Bastion of the Underworld, one of Kinn’s previous releases, The Marcher Fortress is once again another big level, this time centred within this structure surrounded by steep, craggy hills. Its interior is built with a large scale in mind consisting of wide hallways and tall rooms, complete with several accessible floors from one of many stairways leading both up and down. Most of the journey to begin with will take players down into the murky depths to get their feet wet, transitioning from clean flagstone walls into a damp ridden, green stone cistern. 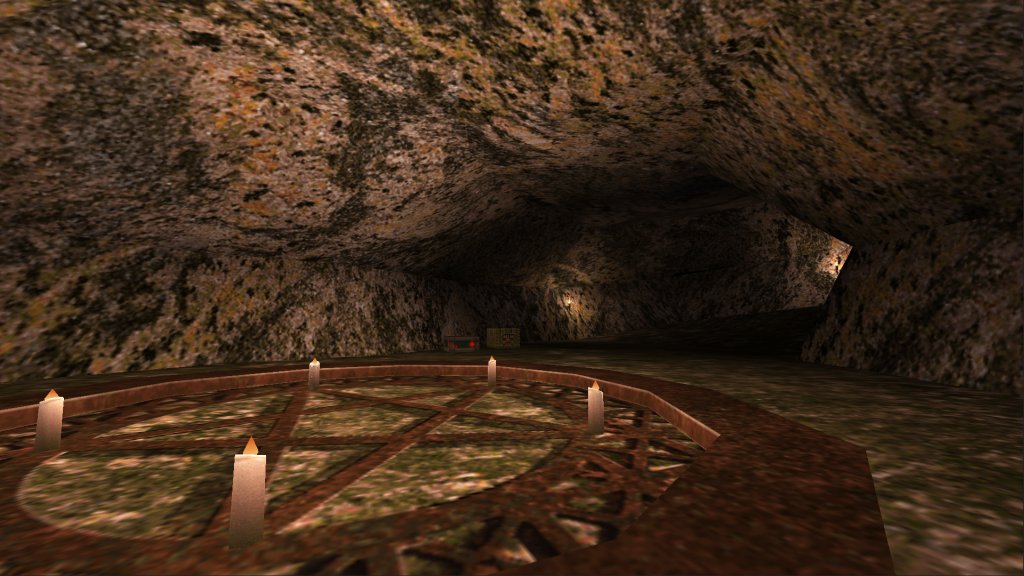 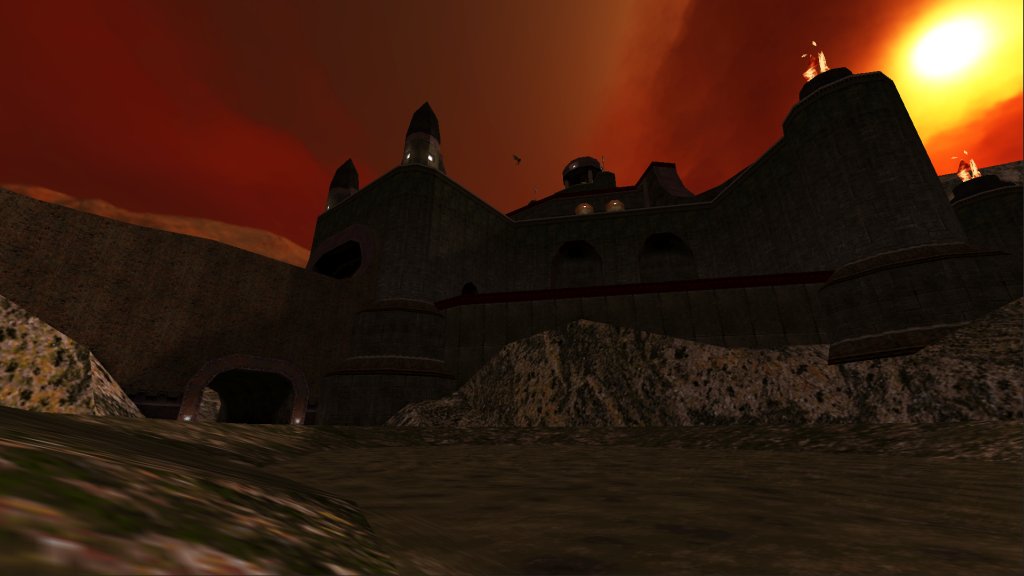 Your main goal in this level is to ring the large bell found at the fortress peak by discovering a clear route that will reach the top, all in order to escape this demonic infested land. Players will naturally progress through the underground sections and eventually locate ways to proceed further into the higher levels of the stronghold, occasionally returning back to previously visited areas to access new routes forward. Finding the Silver and Gold keys will be a vital task during the former half, however the natives will be putting up quite a fight and increasing the challenge in due time. While most of this experience will indeed take place inside closed spaces, the lighting is otherwise moderately well lit to avoid things being claustrophobic. But the lighting does vary at times for a variation of tone, along side some ambient sounds to evoke a suitable feeling in regards to location, like the dripping water and dull winds echoing through the underground. 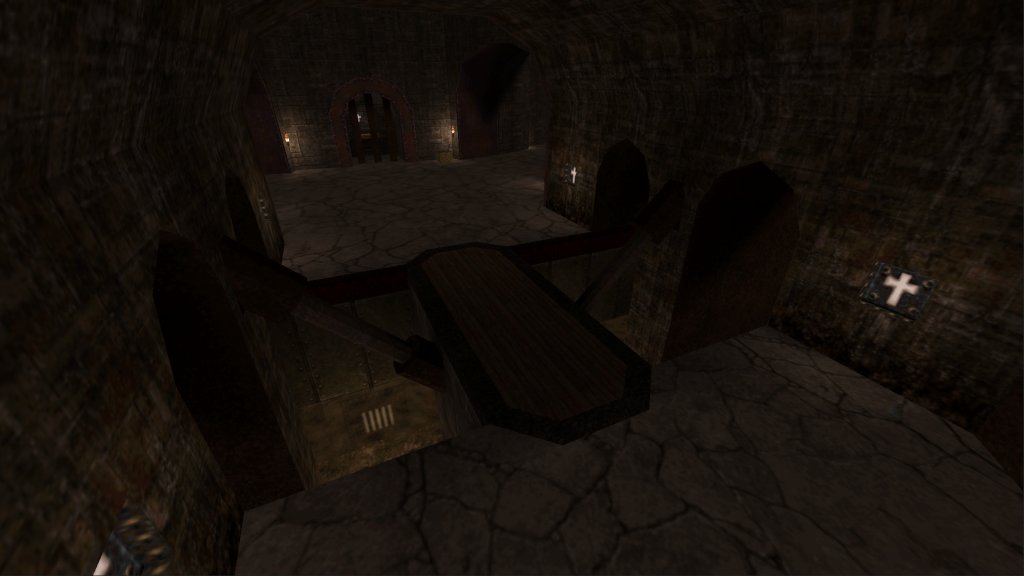 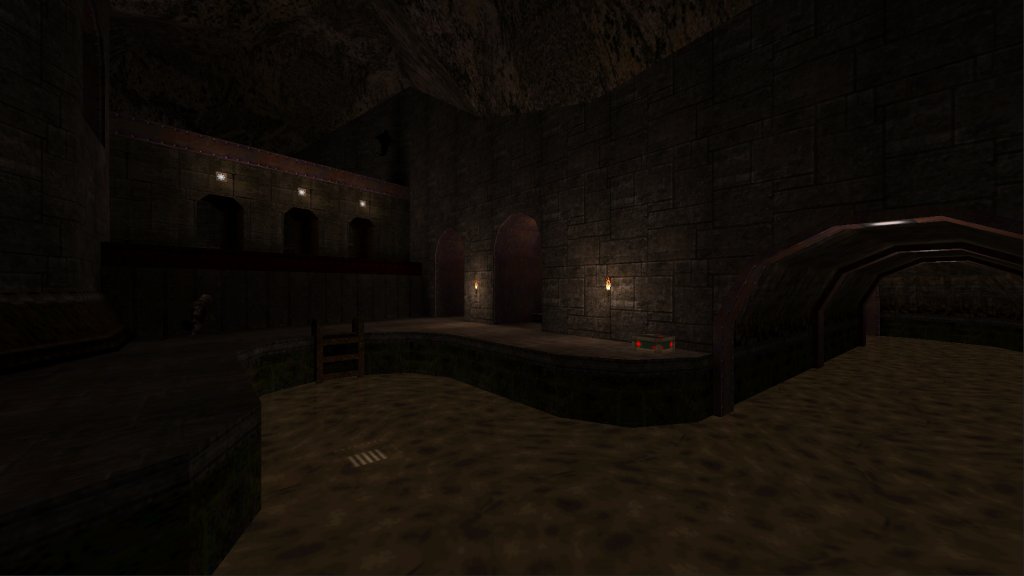 Most of the fortress grandeur is a result of its solid structure, created using bold shapes, curved edges and areas not typically being square. Other details often make use of architectural set pieces like archways and spiral stairways. Later sections then clearly show that parts have been constructed within the mountains itself and come complete with cave interiors and rocky tunnels to break up the man-made aspects of design. Eventually players will set foot onto the outer balconies to catch themselves a breath of fresh air and take a good look at the area below them. Doing so may also reveal access to places that were previously not possible. I loved the small touch with a lone dead tree here too, appearing as if this place had once been inhabited in a time when the land was cared for, but had since been left and forgotten. Or perhaps I’m overthinking and things were in this state from the start and the tree is just an ironic touch. Who knows? 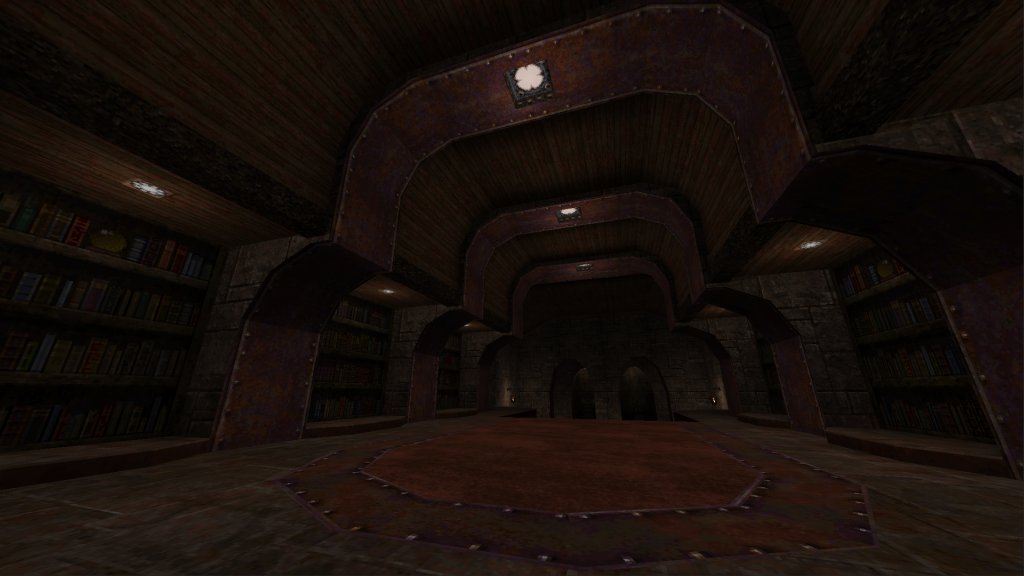 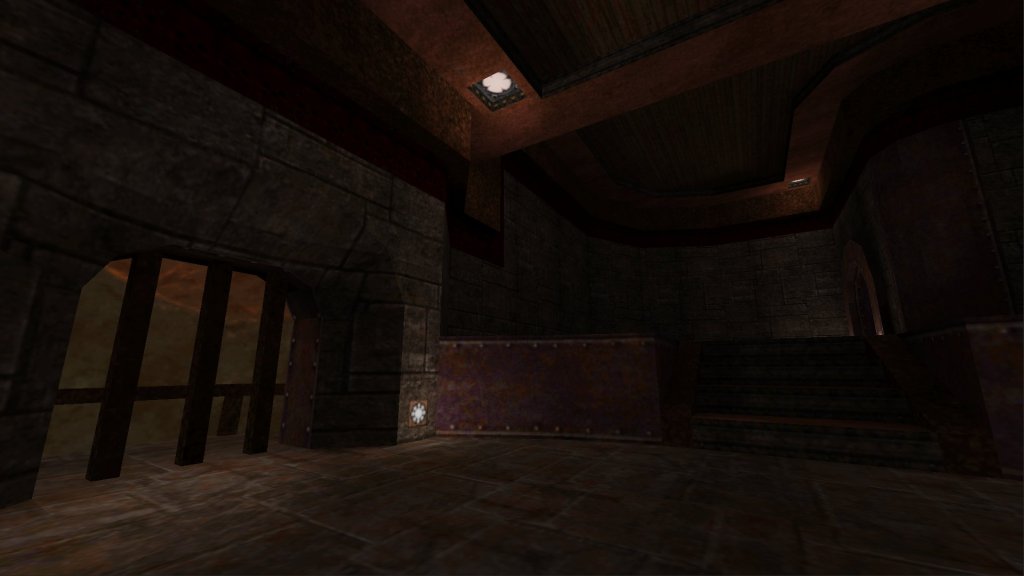 New enemies have crept their way in the bestiary and do blend well enough along side the regular crowd of veterans. The Flak Ogre makes a return from Bastion, a cousin to the vanilla one we all know and love. He fires off a nail burst that can be deadly up close but a mild inconvenience from afar. Small spider critters also lurk about, preferring to group up on players to nibble at their feet. At times they can be a nuisance by blocking escape routes but luckily die quickly and are useful to cause intentional infighting. Imps were a nice addition and feel fleshy to shoot at. Their ability to fly gives some loving to the vertical spaces much like Scrags while tossing down fireballs. Finally we have some hoofed demons called Gaurochs which seem similar to the Hell Knights found in Doom and are encountered during the finale stages. These brutes call upon the help of Imps to aid in combat which in turn can block off your rockets intended for its face. Another returning change from Bastion is increased melee speed, allowing the axe to become a much more viable choice of weapon against weaker foes to save up on ammunition. 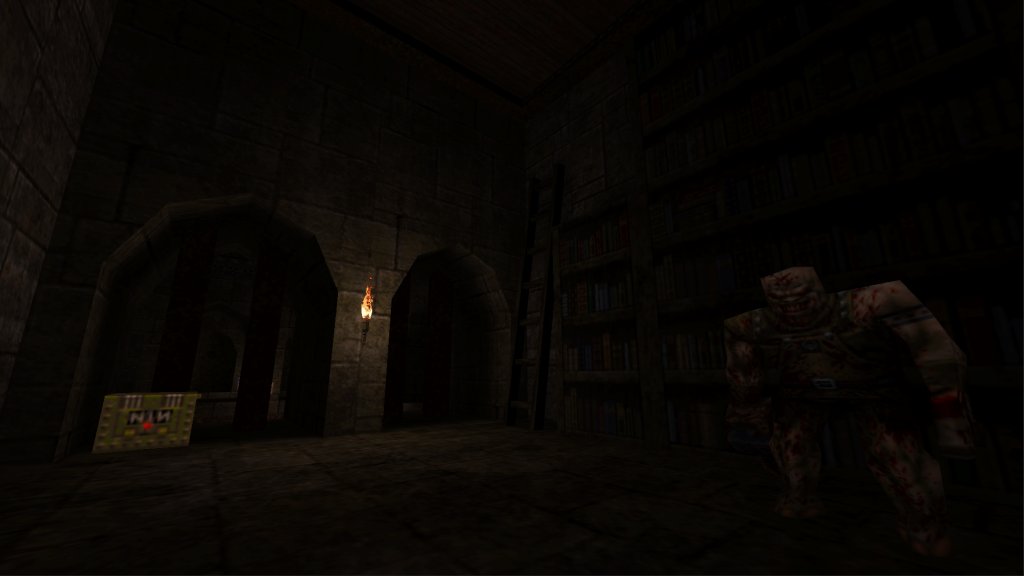 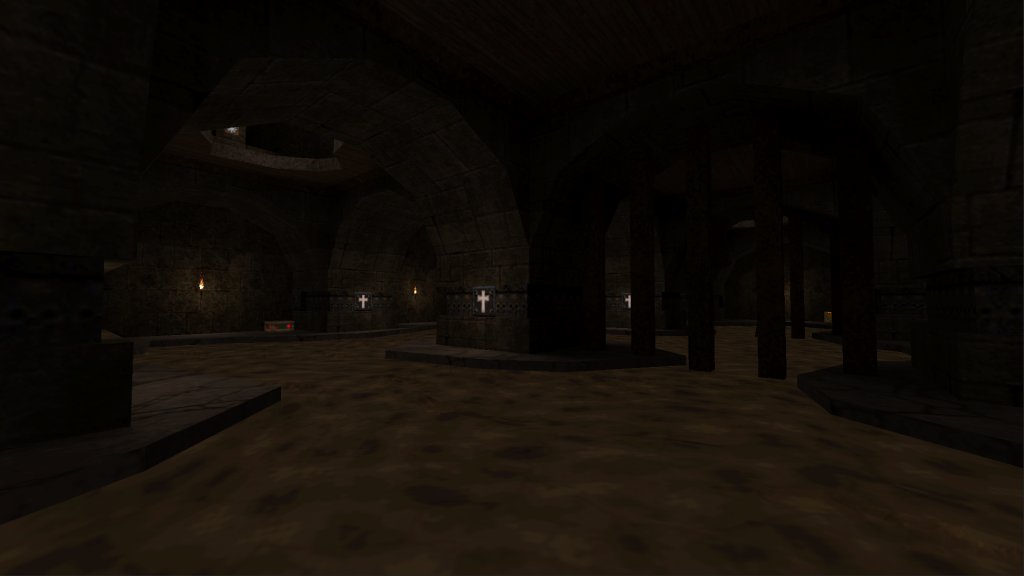 Marcher is no doubt action packed to the brim, offering a continuous amount of tough encounters and scenarios in suitable locations. Stairways can be especially dangerous with Knights guarding them, constantly pushing back whoever might ascend them. This gets more threatening later having found myself swarmed and cornered due to my own mistakes. Knights are the prominent enemy type which keeps players on their toes as they come rushing into close quarter combat. Our friendly vanilla Ogres are then primarily used in specific spots to disrupt the flow during these fights to throw players off. Shamblers and Vores can give quite a bruising, being placed in areas that can favour them and relying on players’ wits and timing to compensate for the lack of cover in these areas. Had to laugh at one of the Shambler encounters, thinking that he ought to go on a long diet before attempting surprise ambushes. There is more than enough variation toward combat across the experience, often adding some spice and ramping up the challenge. And just when you think things might be over soon, Kinn says otherwise. 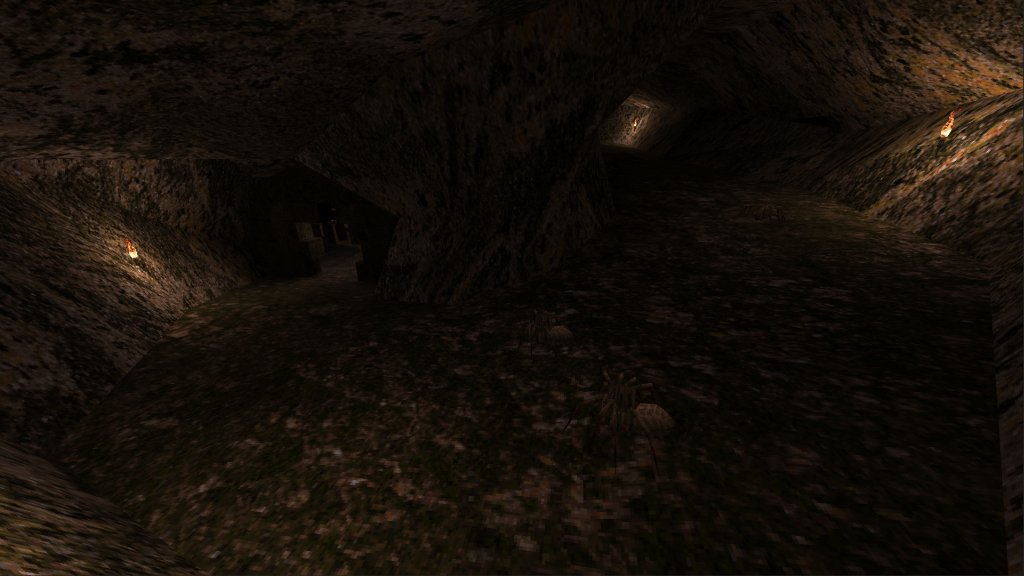 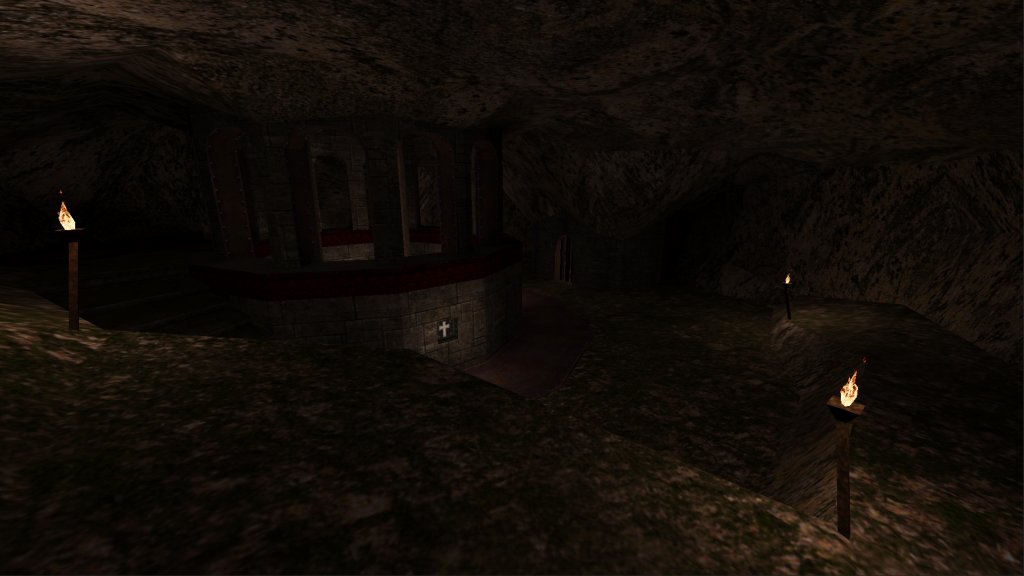 An excellent and well paced level taking place inside the grand and towering fortress, offering an experience that is focused heavily on tough action which only increases during the journey’s course to reach the bell tower peak.