Bastion of the Underworld 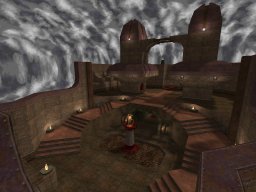 Introduction
Bastion of the Underworld is a large, action packed fortress level from ’04. The demonic forces have begun to organise themselves in greater numbers upon your arrival. Hordes of creatures await you within this level, throughout the dark interior halls and inside the fortress exterior walls, including two new enemies to feast upon you while trying to find the exit out of this Netherworld bastion once and for all.

Gameplay
The pacing starts off rather mild and slow, eventually picking up part way through the map and becoming more of an action packed feast. From the get go, you’ll be facing off against a few tougher foes, along with the weaker ones following from behind. Knights and Fiends take most of the spotlight during the early stages, while later on become more prominent along with a wider variety of other beasts. The hordes eventually increase in size and general difficulty, especially as the locations will differ from small to large which make most of the Shambler battles pretty threatening. The larger outdoor sections make avoiding enemies pretty easily, however Ogres have been placed effectively to break the flow of battle as they lob grenades from above down your way. Unfortunetly at the odd occurance, enemies will get stuck on the architecture, most likely staircases, making them much easier prey.

There are also three new enemies included that’ll prevent to stop you in your tracks; The Flak Ogres like to chip away at your health and can be more of a pain than ordinary Orges; Sergeants are dangerous foes that shoot out a stream of projectiles in a random pattern, deadly at close range and sometimes tricky to avoid long range; Shufflers, which are best described as faster Shamblers without the lightning bolt, but instead have slower projectiles. Their speed is enough to catch up to you and give you a good smack across the face and possibly the most annoying enemy of them all. Ammo and health balance should be fine as long as it’s not wasted too much, but there can be spots you may be resorting to a single weapon from time to time. Luckily the axe has been modified to swing much faster than usual, which makes the melee weapon even more usual in dire need, or to specifically save ammo against the weaker enemies and can work quite well at times. Health on the other hand is plentiful if resorted to properly, with some powerups and armour along the way to help you during battle. 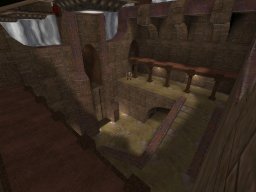 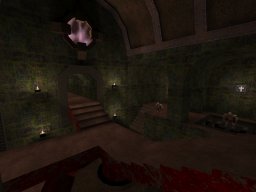 Design
The large fortress has a nice consistent variety of design between the upper and lower areas of the map, but mostly consists of a light brown and dark grey colour scheme of bricks and metal. The lower areas however make use of a green which gives them a dungeon like appeal. Generally, the design uses a lot of curves, arches and spiral stairways throughout the entire level and various other instances of structure come out of the walls preventing a flat design, which looks really neat. Rooms are typically tall and wide with few corridors connecting up the different areas, while exteriors are large and open with plenty of details to refrain from being too empty. The lower parts of the fortress have a rather nice macabre ambience, especially with the global sound that plays during the experience, as you come across some grotesque grinding machines obviously used to cut up living flesh and pits of lava that contrast quite well with the colour scheme. Lighting is also done pretty well, darker interiors are lit by some nice looking torch lights while the exterior is lit by a bright, overcast sky. Other nice features with the lighting include those larger fires within the braziers dotted around the the large walls of the fortress. 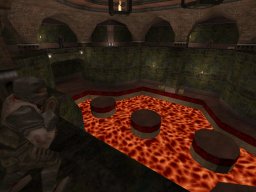 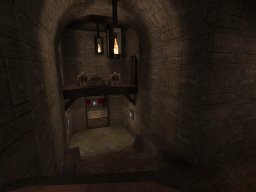 Conclusion
Large, action packed fortress level which takes place both inside and out. Design is nice, makes use of a lot of curved structures and pretty well lit throughout. Another enjoyable map, while the new enemies may become a nuisance.