Once released and thrown into the fiery pits of controversy some years ago, an updated version made its sudden appearance. Taivo takes the original release, leaving a majority of it intact with only a few changes, while expanding from where the map had left off, making full use of Eduke32’s increased limitations.

I never got around to reviewing the original release, so this was definitely a good reason to replay this one and jumped right into it, only to later climb back out feeling a little sour after completion. Dogville takes place within the heart of a large city, the earliest segment from the original provides a hub with multiple accessible areas diverting from the street layout, which surrounds the area before looping back onto itself. Using this, gameplay then focuses on non-linear progression, giving players the choice to explore one of the many locked buildings upon finding their first yellow key card. Inside each building is a special ‘dog switch’, all of which need to be activated in order to retrieve the blue key card and move forward. 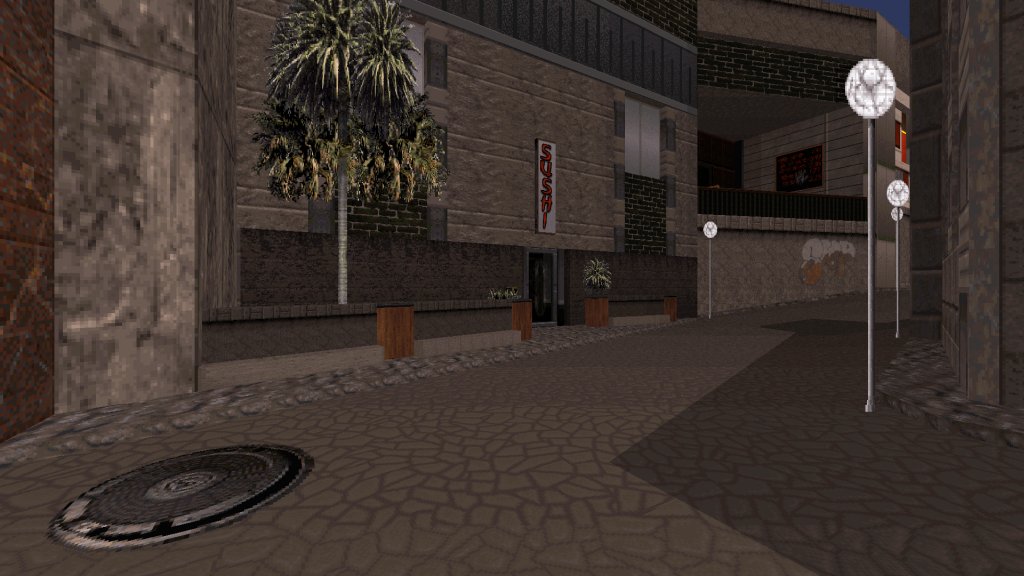 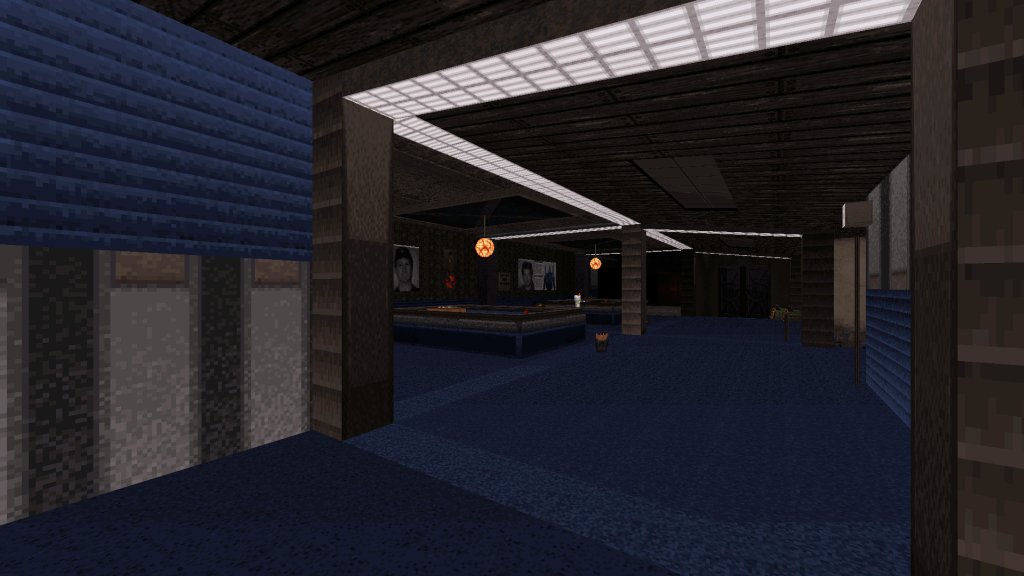 There is a number of locations to visit, including but not limited to, a billiards hall, sushi bar, a small book store and a large supermarket. Visuals boast loudly with several detailed building exteriors and often use a tasteful variety of textures and sprite work to create modern style interiors of all kinds and are well furnished at that. Eye candy is simply abundant and isn’t limited to the smaller details and decoration. Structure and layout helps to make the city feel expansive, along with other realistic touches like the downward curving roads, varying rooftops heights and scenery beyond the playable boundaries. As for combat, it’s balanced out fairly well with plenty of supplies and weapon choice scattered around, while a number of different enemy types loiter from both above and below, with others spawning in when progression is made. 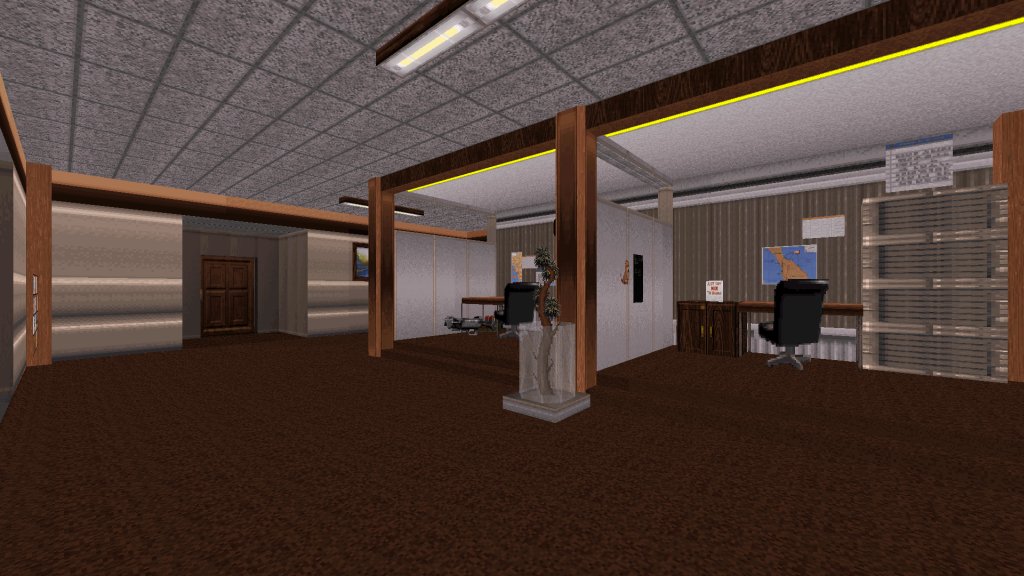 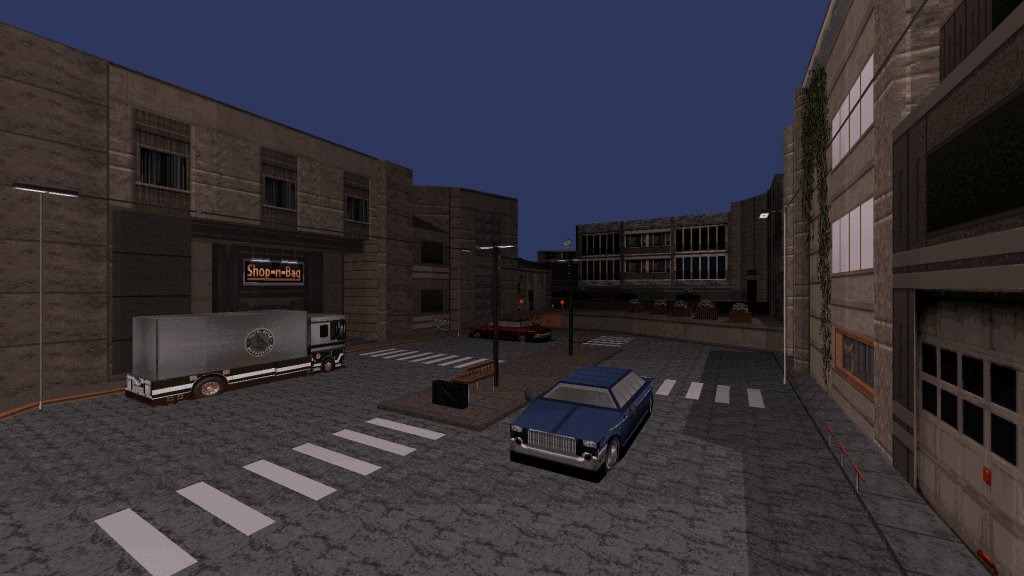 From the point the original would have normally ended is where the level extensions begin yet also slowly loses steam. Gameplay shifts towards a more linear progression and the action leans in favour of the aliens, increasing the difficulty by reducing supplies. This however does become a problem later where ammo for the bigger guns was limited, forcing myself to rely on the pistol against tougher brutes just to save enough for the hordes. These new additions, while following a similar manner of design and structure, simply lacked the same creative punch seen from those in previously visited areas. Texture usage is noticeably less experimental than usual and appears a little more standard, only occasionally putting together something interesting like the metro. These extensions to Dogville tend to drag the level out needlessly longer than it needed to be rather than complimenting the original map, especially when gameplay becomes increasingly dull and sluggish overtime once enemy placement resorts to just throwing enemies into the field, like large groups of Troopers and Battlelords being used often in later stages, both of which can be quickly dealt with effortlessly.

No doubt a good thing to see an old classic getting an update and proper re-release, but I honestly felt that the extended parts didn’t add much to the overall experience, lacking the same visual punch and increasingly sluggish combat. These sections on their own provide a decent action packed level, but not on par with the original Dogville.