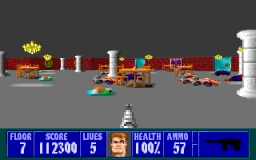 Introduction
Escapism is a 10 level mapset based off the shareware release of Wolf3D. File includes both DOS and SDL executables.

Review
Escapism begins by putting the player behind bars and throwing away the key, forcing them to attract some attention for the door to open. Although a neat idea that makes one feel more like a prisoner, it does have faults where the guard could take a long time to do what is required of him. At this point I actually assumed there could be a secret exit out of here, only to find nothing and load up a new session to try again. I found it more effective to shoot and wait right next to the door to ensure a quicker exit. Besides from a possible slow start, everything beyond this point works well. Ammo is sparse on this floor, further creating this sense of escape and encouraging a resourceful pace before players can comfortably stock up to do as they please on the later floors. In general, there are many enemies guarding various rooms, including a high number of SS from the get go, but usually with plenty of ammo and health scattered around to survive these skirmishes. In fact, sometimes there was too much food at times, enough of it to last several generations. 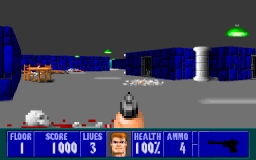 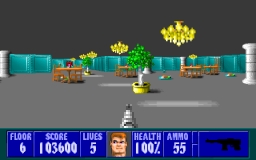 During the experience, I didn’t notice many deaf zones, so firing off a round will alert tons of enemies at once to your position, so being at the wrong spot may be deadly. Yet as a result, this means that the player will find themselves clearing out entire rooms by waiting at doors, making the combat simple and then offering very little surprises around the next corner. Thomas does try to change the flow during the later segments of the episode though, such as the interconnected nature of the layout on the fifth floor, allowing enemies to roam almost freely to catch the player off guard upon returning to previously visited rooms. The sixth level then brings the action down a notch for the midpoint, slowly rebuilding the tension once more. Mapping is strong and visually pleasing, offering a fair variety of layout styles and texturing schemes. However, I couldn’t help but notice the number of eating areas and dinning halls littering the mapset, some rooms of which increase in size, and I get this impression from the amount of food scattered in these places. Because of this, it almost felt like this project could have easily been called something on the lines of, Escape from Lebensmittel Festung to complete the package. 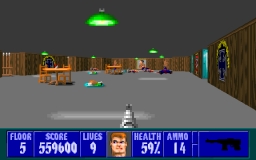 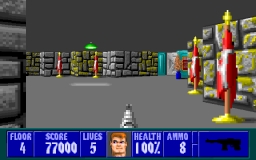 Conclusion
An excellent set of maps with strong mapping, varied layouts and good visual design across each level. While the gameplay offers many enemies, it does become too simple with little surprises.