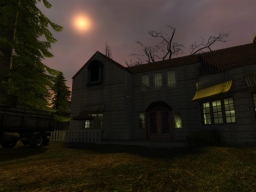 Introduction
Jack Hawkfield, a Special Weapons and Tactics operative, has recently lost his beloved wife in a mysterious death, only leaving clues which led to believe in a suicide. He soon falls apart and only his best friend Frank is here to help him get over his grief. Jake recieves a call one day ordering him to the station. An armed group of elite soldiers have taken control of a hospital, but Jake will soon learn that this isn’t a common hostage situation.

Review (Prologue)
Before jumping into Underhell, I had assumed that this would have been a horror themed experience from start to finish. Instead, what I got something a little different while involving concepts of horror, an interesting mix of living alone in a house and heading out on the field during work. Upon starting a fresh game, the player will find themselves inside of the house belonging to our main character, Jake. He awakens at the sound of the phone ringing, thus granting us the ability to take control. This house works like a hub before proceeding on with the chapters, allowing the player to involve themselves with several things. The general idea here is to explore and solve the mysteries contained within the house, along with checking the mail, reading emails and answering phone calls. The diary of Jake’s late wife can also be found in the lobby and can be read, but many pages are missing which need to be relocated, which may reveal some truth behind her death. 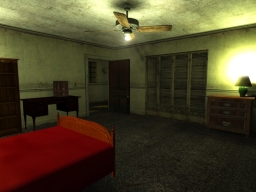 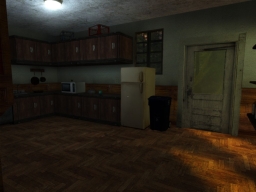 During all of this exploration, the day is going to waste away and thus night will fall. This is when the situation gets creepy, and the sole question whether you are truely alone. All kinds of subtle things take place, but even those everyday occurrences spooked me out, from the clock chiming to the sounds outside. Or perhaps the latter wasn’t normal and something was watching me through the windows. I could never tell, nor did I want to find out. There was definitely some good atmosphere here, even if I may have been over thinking things, which is also fine if it causes the player to scare themselves. Sleeping will return you to daytime, except Jake takes a detour into slumber land, entering a nightmarish realm which can be described as a tamer UNI. It’s an optional task to get involved with, allowing the player to choose whether or not to explore Jake’s state of mind. Horror plays some part in this place, but pushing forward may yeild additional background information, all while figuring out the small puzzles beyond each doorway. All of this may provide vital clues and reasons for the events that take place throughout Underhell. 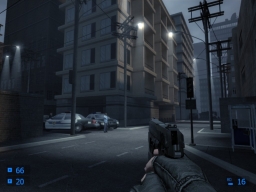 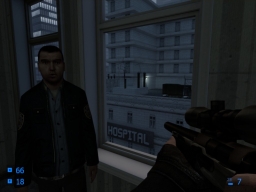 Using the truck will trigger the next mission, throwing you into the role of a SWAT operative and involving a fair amount of action packed gameplay. This might seem jarring at first, but the combination works out fine and future instalments may allow the horror elements to be further explored. The prologue has the player getting involved in a task to stop the terrorists who have taken over a hospital and to save the hostages. Combat and a few movement mechanics work differently in Underhell, but nothing too extreme and keeps the gameplay enjoyable. In order to effectively use guns, you must aim down their sights. Hip shooting still works, and while very inaccurate, it can be helpful in certain uncalled situations. There’s also a quick kick function for simple melee which I found myself using often, but a forewarning, I noticed that I crashed here and there when gibbing an enemy through doing this. As for movement, leaning is another addition and feels right with plenty of weight, but viewing bobbing was overdone which I could fortunately turn off. I rarely even notice head movement when I walk, so I should expect the same in a game. 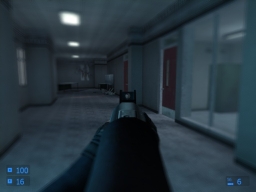 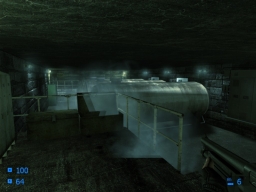 Gameplay can be summed up as being engaging with nicely balanced action. Enemies are used fairly well, usually in large numbers and easy to take out, they’re sometimes placed in the distance where you cannot reach easily, though it would have been better for those with shotguns to try and get close more often. Other times the enemies will all come out of their hiding spots for a surprise attack. The levels do offer some variation in location and feel of gameplay, some places such as the sewers or shopping mall are quite large and open, allowing the enemy to flank the player. The hospital and certain sections of the sewer are tighter, which means getting close and personal, or running away from grenades. It’s the usual deal here, but it’s executed well enough and at times can be easy to get through. Other little variations do take place along with the occasional cutscene and change in events to keep things interesting which I commend, I was always looking forward to what was coming next. I actually got a little upset when completed the prologue, satisfied with it’s length and teased with the introductory cutscene for chapter 1. I do look forward to that and will make additions to this review when further releases are made. 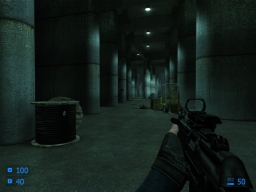 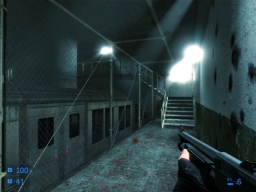 As already mentioned above, there is a fair amount of level variation which has a large part in the design, but also makes sense in the progression between each theme at a decent pace, not overstaying their welcome and providing a good sense of location. As much as I find them boring, the sewers here are done well simply by following a different scheme of layout and aesthetics. Instead of several damp hallways, this place is largely scaled with a tall ceiling and feels like some kind of nexus with the occasional worker rooms to the side. The change in the usual scenery was a good decision by the designer to avoid the dangers of a theme being bland. The shopping mall and metro sections are also done well, the former opens up many of its shop to be freely explored, including a working interactive bowling alley, a detail I had a fun few minutes admiring. My favourite part of the metro is how alive it feels with trains rushing by and travelling through the tunnel and the place taking shape as one should expect. I even had some Mirror’s Edge vibes here. Lighting on the other hand can be mixed bag at times, while visually appealing one moment it does get weak in some cases. This is very evident in the house and shopping mall, not really adding much to the scene except being there to light the way and tends to be blotchy, but in areas like the metro it looks great. 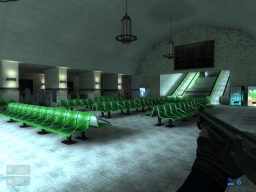 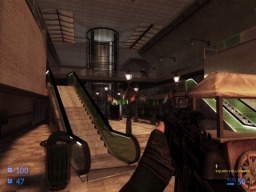 Before I finish up, Underhell also includes some new voice acting for various characters. Frank will be your mentor throughout a majority of the mod and talks via radio communication to update you on information, require you to do certain tasks or some general banter. I don’t have a particular problem with the voice itself, but when combined with the radio effect it became grating on the ears. It’s bearable at times, but what it causes in an emphasis on his sharp tones on certain words which got annoying. It’s nice to hear new voice work though and it’s a good effort all round and adds to the experience.

Conclusion
An enjoyable experience all round. The house, while the horror was mostly subtle, did creep me out and created some atmosphere. As for the action packed gameplay during the mission, it was engaging and approached well.