Fables of the Penitent Thief 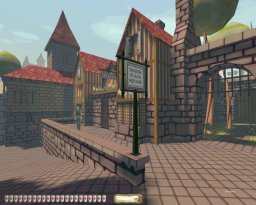 Introduction
Dear Diary – Boy, I am in a pickle for sure! I was caught red handed as the thief who nabbed the king’s loot. Personally, I think my wife ratted me out! But rather than toss me in the dungeon where I belong, the King has asked me to return everything I’ve stolen. He thinks I know where it all is, but I have a nasty secret… I don’t have a clue! But if I can track it all down and return it to the castle, I’ll get a full pardon. Well I stole it all once, I can do it again. Time to get to work!

Review
Fables takes on a stylistic approach as a mission not taking part of typical affairs of the master thief, Garrett, or the ordeals that take place within The City. If you have ever played through or come across any of the classic adventure games such as Monkey Island, Space Quest and other similar titles, then those are pretty good examples as to how one could describe this mission in as few words possible. Except the chance of death is almost non-existent. Unlike a majority of Thief missions, this one completely shies away from its core and essentially goes right ahead to create a new game altogether. The gameplay is vastly different from what you would expect from Thief, but stills hold some of the familiar mechanics by putting them into use for the puzzles to come such as stealth and rope arrows. This little adventure is much like the examples mentioned above where you will find yourself running around town, talking to people and solving problems in order to reach your own goal. Nothing is ever simple in these worlds, where one particular item you need in order to solve a puzzle is currently in someone else’s possession and will not part with it unless they get something in return. 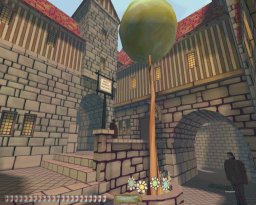 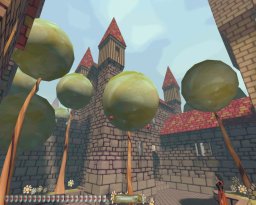 The entirety of the storyline will take place across two missions, the first taking place throughout town streets to locate each of the King’s stolen treasures, while the second takes place within the King’s castle to help solve a major crisis that has taken afoot. This is all held together with a unique visual style, literally painting itself to appear like a drawing come to life. Much of the environment follows this design closely using a colourful palette and bold shapes to match this cheerful appeal, like the big round trees or the simplistic architecture with cartoonish textures. On that note, details are everywhere like butterflies fluttering around flowers or the spraying fountains. The visual style works well and fits right at home, especially in favour toward humour, character personalities and the general goofiness you will come across like a sign for Crafty the Craftsman. This is a trend which remains consistent right the way through, except there were several misaligned texture hiccups to be found around the place, from wooden beams to floor rugs. The textures in general may also become a bit of an eyesore for some players since they jitter around often. There is a solution to remove this here.

Finding the lost items is going to require several tasks, each revolving around puzzles and solving problems for the citizens scattered around town. Interacting with them is a lot of fun as they speak in some garbled gibberish, while subtitles pop up to translate this into a tangible language. A nice little touch to interaction may include simple Yes/No dialogue trees to further expand the conversation in either direction. For the first ten minutes in my session I simply had fun exploring this silly world and interacting with it, much like I did in the earlier mentioned adventure games, enough that I’d love to see more. This includes the music, which almost sounds like something straight out of Tetris, very retro and catchy with different tracks depending on which part of town you currently reside in. 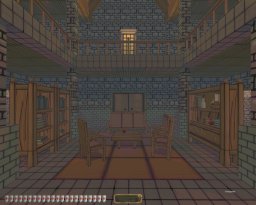 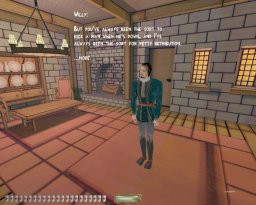 Fables offers much variety for it’s gameplay from puzzles and themes, allowing the experience to remain fresh all round such as, sneaking around a house, locating picture pieces, getting lost inside a tower and some fun with rope arrow acrobatics in a twisted home. Much of it is there and waiting to be explored. The last two examples had my favourite locations and gave some creepy and abstract themes in their own way. As for the stealth, although there isn’t much of it around, it does play two significant roles and one will help in receiving money in order to buy items and tools. And where can you find money, you may ask? It grows on trees of course! Apples are the currency of this land and the richest man has a garden full of them. The only issue for you are the guards and they’re not going to allow anyone past them to get their hands on the goods. And who’s the best thief around here? If you get caught though, say goodbye to what you grabbed and prepare for another attempt. The odd Apple can also be found lying around all over the place which is handy for some quick cash. What else can be done around town? Finding easter eggs. They’re hidden all over the place and a little side quest you can choose to partake in. I haven’t found them all myself, so I have no idea what the results yield. 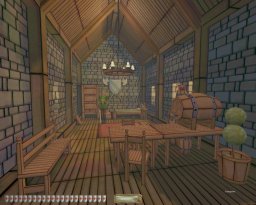 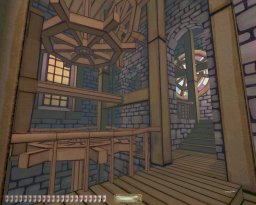 After you’ve managed to patch things up around town, you’ll head off into the second mission, taking place inside of the King’s castle. This one doesn’t quite follow the same pattern of gameplay as before. Something has gone terribly wrong and it’s all up to you to help sort this problem out. So rather than hunting down for additional items, this is where most of those acrobatic aspects will come into play, to avoid traps, climbing to the top of a ‘small’ room and putting you to the test to reap the rewards of this task. Generally the feel comes across as more like a platformer than an adventure, but it manages to retain the same kind of humour and appeal, just without all the puzzles and relying on a lot of subtle things, such as the speech from the knocked out guards.

Conclusion
Fables a visually stylish and humorous mission taking a step toward classic adventure than your typical Thief affair. There’s various puzzles to be solved, acrobatics to be made and a bit of stealth on the side. It’s a fun and colourful mission for all ages to enjoy.