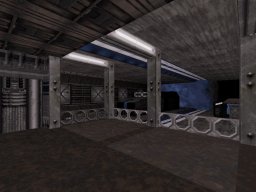 Introduction
Duke is just a regular cargo inspector, sent over to orbiting docking stations to check for illegal cargo. During a routine check up at one of these, Zero Alpha, a sudden distress signal comes up for only a second. While looking for the docking port, he notices another ship coming toward the station and figures that it might be a cargo ship. It might not be any threat to him but he readies himself of what might come.

Review
Here’s a blast from the past, Docking Doom is a space themed level taking on a mix between the classic style of the Lunar Apocalypse levels while harbouring more of an edge toward details and architecture. As such you should expect the design to look great as each area has plenty of variation, texture schemes changing depending on the location and purpose of those rooms. Besides from a the odd couple of places that don’t appear as good as others, like the computer room to the right of the start, not many area seems to lack details otherwise, both rooms and corridors given equal treatment with good trimming and plenty of decoration to remain pleasing to the eye. The design pretty much holds up well today, although it can be a little tight squeeze for Duke here and there. 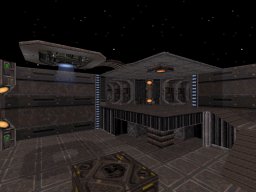 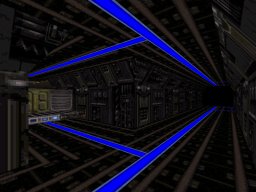 What I had especially found appealing was the interconnectivity and semi-nonlinear nature to the layout which made it feel like there’s more freedom onboard than you’d expect from a space map and becomes less claustrophobic as a result. Even the ventilation shafts take a good part in this. The general gameplay starts out well, throwing in some exploration and a decent amount of action scattered throughout. However, things become a little flawed when it appears no clue is provided as to where the blue keycard is found. This had me lost for several minutes while holding onto a yellow one, unsure where to use it. The ending is also a disappointing fight against a Battlelord inside a small arena. It’s pointless to fight in there since he can walk on top of the crates and wipe the floor with you in no time, leaving the doorway the best position to tackle him. 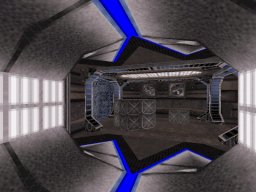 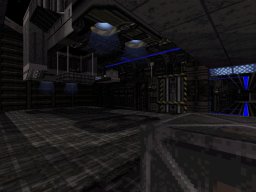 Conclusion
Besides the issue with finding the blue keycard and poor ending, the map holds up well enough even today, consisting of a detailed space station with an interconnected layout.