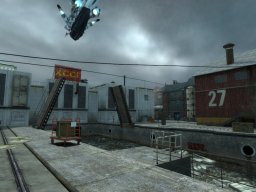 Introduction
Something goes terribly wrong during the experiment back in Black Mesa. The facility is rumbling, lights are flashing and weird creatures appear to stare at you. Then everything goes black. Once you have come to, it soon becomes evident you are no longer inside Black Mesa.

Review
This is one of those releases where quite a number of problems stood out in an uncomfortable manner, turning what could have been a great experience into simply a decent one, dragging the mod down due to the flaws present throughout. Calamity starts off during the Resonance Cascade back in Black Mesa where it appears Freeman finds himself warped into the future several days or so before the events of Half Life 2. The tone is immediate upon taking the first few steps outside, bringing you to an industrial district within City 17 on a gloomy, overcast day. The weather was a suitable choice to approach which definitely gets across the feeling of dread. The washed out colour scheme, or lack of, along with the moderately lit outdoors and environment help to ensure that depressing tone. Cardone takes the visual aspects on a different path by straying from the typical City 17 style and giving it his own personal touch and detailed design. Despite this however there wasn’t much in the way of interesting locations to grab your attention, although there are indeed good looking locations, these are mostly consisting of generic areas after more generic areas. There were also a few instances where I could reach places where I’m not supposed to be, revealing missing textures and floating geometry, which is a bit troublesome when exploration may reveal weapons and supplies. As for lighting, although there are places it has been used well, in other cases it can also be a weak aspect in Calamity’s level design, but I’ll touch on that later because it also affects the gameplay in ways. 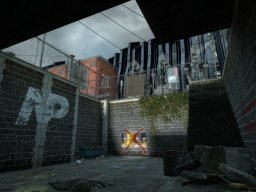 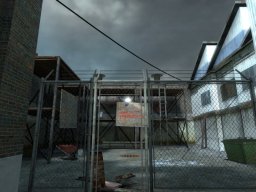 What appears at first to be some mild combat against Civil Protection firing upon you from a distance, the action will quickly heat up. The majority of the start isn’t too bad, certain areas remain fun and some clever scripted sequences such as the one instance where an enemy ignites a nearby barrel. Radio messages can be found throughout to give the maps some background to explain when this is all taking place and what is currently happening. However it is here I began to feel lost concerning the storyline as if it were an alternate history or something else entirely, giving the impression this is a seven day war rather than the established seven hour one. These radios unfortunately don’t really tell us anything we don’t already know and the dialogue involves a lot of cussing and tends to feel forced. After a while I wanted to ignore them because it broke the flow by standing around for several minutes at a time, but I kept at them either way. Soon enough the gameplay goes down hill, more so around the halfway point and becoming less enjoyable to play. Several occasions will require you to fight against a group of enemies where there is very little cover provided. One guilty example is the battle with a gunship on the railway tracks with Combine added to the mix, who either charge at you on ground level or shoot from above. This doesn’t make the fight exactly as tense as it should, nor difficult either, it just becomes more of an annoyance with a single train carriage to hide behind and rockets spread across the area in the line of every gunner’s sights. 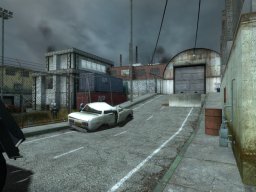 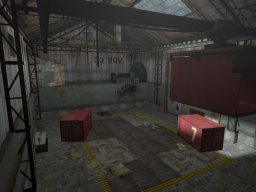 Lighting has a bad effect on the gameplay in general, pointing you toward a path when in fact the correct one lies behind a door shrouded in darkness. Another situation takes place around some lifts, the lighting focused on those solely and leaving a certain set of doors in shadow only for them to blow away with little indication. It’s not bad to throw surprises for the player, but ones that appear to come out of nowhere while low on health leans on the edge of frustration. The last segments taking place within a combine base winds up being a big disappointment appearing as if the gameplay here was finished up quickly just to get things over with and suffers as a result. The design here approaches large scale rooms in a grand symmetrical and uniform manner of construction, quite the opposite of Combine architecture, while lighting remains mostly dark and the scale doesn’t exactly add much in terms of visuals and soon appears dull in places. The action however relies on sending, or rather, throwing large hordes of Elite Combine at you with little to no cover and expected to deal with it. This gets tiresome quickly and the finale only intensifies this mechanic where it begins to grind on you, since killing them seems a pointless task because more enemies will take their place seconds after.

Conclusion
Despite some of the flaws present which drag it down, Calamity is still worth checking out for the enjoyable first half and offers a good design approach to an industrial district straying from the typical City 17 style.