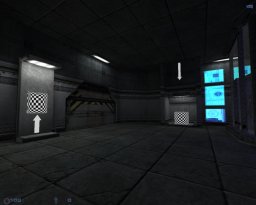 Your science team has received information about a nuclear accident taking place within the main Deimos station. Kypervortigaunts have analysed the base and a portal has opened up inside of Lab X-26. The place has been evacuated after a large battle against incoming, mysterious zombifications and psi-emissioned security staff. There is only one weapon that can shut down the malfunctioning portal system: The Kyperior Cube.

Review
The general theme takes place within the depths of a high tech laboratory filled to the brim with a metallic choice of textures, broken up with the presence of different types of monitors, large scanners and other similar tech set pieces. Each area however seems to be purposely designed with gameplay in mind over the location making any absolute sense or having a known purpose a lot of the time. This only adds to the weirdness of the place, and that isn’t such a bad thing, allowing the levels to blend in with the atmosphere while looking visually pleasing in the long run. Lighting is mostly fair, well lit in areas while darker in others and done suitably. Unfortunately there is only one small outdoor location, which I find kind of sad because you are confined indoors for the most part of the experience, so it would have been nice to see more places like this as a way to give the level an additional bit of visual variety. 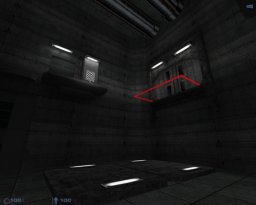 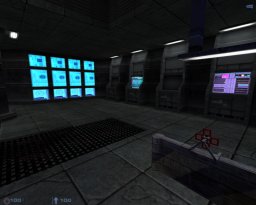 Progression will rely on a fair balance between simple puzzles and fighting enemies as you will be spending a majority of the time carrying around a Kyperior Cube to unlock doors using the security scanners to proceed onwards. Not too long later, you will eventually come across a Kyper Assistant who is also going to take part by opening locked doors and performing other tasks that the cube cannot. Teamwork is one of the strong foundations which make this a perfect map for two players to enjoy, as each player will feel involved by taking care of specific tasks. This can include one person assigned to take care of the cube while the other is assigned to direct the assistant throughout the level. In certain situations, you will need a helping hand to manipulate lifts, opening doors or directing the attention of enemies away from you, so there’s always something for both players to keep busy with. Enemies are not overpowered to ensure some fast paced action to clear through hordes of them easily. This is helpful as some areas will contain a few continuously spawning enemy scenarios until a goal has been met before they stop doing so. The numbers aren’t too high with plenty of ammunition supplied to get through everything without too much of a sweat. 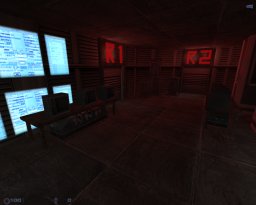 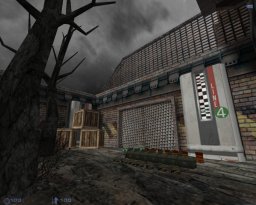 Kyper Kuutio achieves a unique atmosphere and indentity of its own, running its course through the three maps by making an entrance as you step into the starting area and presented with a title screen. This comes from the usage of an industral soundtrack, created by the author, to present a chaotic and unsettling feeling as you progress through certain segments of each level. The fast paced beat with a seemly inconsistent rhythm playing in the background is a good choice to enhance the mood and style. It goes even further into the visual side by giving the play these insanely large weapon models to appear much more powerful than they are and enemies also remain consistent in wierdness, like the fast moving zombies.

Conclusion
Three enjoyable levels which contain a fair balance between simple puzzles with the cube, fast paced action and engaging teamwork while a chaotic, unsettling atmosphere is created by the use of a fitting industrial soundtrack.