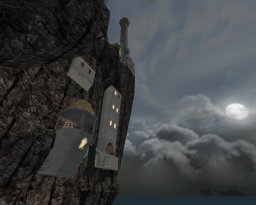 Introduction
This review is way overdue due to various reasons, but now it’s finally up. Reissues is a collection of nine different, self contained levels by various different mappers. These are all linked together via a hub, which allows you the choice of level to play. After completition of a level, you’ll return here again to make the next choice. Each of the missions are unrelated and follow through with a variety of themes, locations and style throughout the compilation.

Coil by Kol
I’m going to be straight to the point and say that this is my favourite level in the pack. Takes place in what appears to be an industrial sector with various warehouses. Level design as a whole is very detailed and makes good use of lighing. I especially like the logical choices and smaller details within the theme, like the vents and gutters on the exterior of buildings, operable forklifts to proceed further and even a voltage machine doing its work in one area. Layout is non-linear and every location is accessible whichever path you choose. I explored as much of the level as I could, immersed with the design. Gameplay here is fairly slow paced, small battle against either military grunts or aliens. Plenty of supplies about to keep you in fighting order, and you can always explore the alternate route for any extra supplies before jumping into the first portal. The finale is pretty neat, where action is upped a notch. A helicopter also constantly sweeps the area trying to find you, but there’s plenty of hiding spots, before you have the chance to silence it for good.

Cyan by Half-LifeManiac
The level starts as you stand on small ledge within the canyon area, just outside of the base you’ll need to make your way through. Upon entering, it becomes evident that something isn’t quite right going on here. I love the general design in this one, which takes a well chosen departure from the typical Black Mesa style to create something more fresh and appealing. It leans mostly toward a clean, hightech facility with light hue of blue. There’s plenty of detail everywhere you go and lots of shape in each individual room and corridor. The author ensures the facility looks bigger than the playing zone by adding several inaccessible areas, whether it’s doors or ledges. I especially loved the way the health chargers were design and how the suit charger especially works differently. Gameplay is slower paced, fighting against a few aliens here and there at a time, solving a few small tasks and occasionally babysitting some fellow survivors to unlock doors. Good length as a whole, even though I wanted to see more.

Echo Transit by Snotball & Sjakal
Gordon is teleported into a section of Black Mesa where a fellow scientist and Barney are waiting. They plan to use this very teleporter to get themselves out of there, but for it to work for all three of you, the battery unit nearby will need to be charged. Ironically, you’ll need to head for the surface with the unit to do this. You will be fighting against military grunts to both defend the crane and allow yourself to get the power cell charged, with various other problems that get in your way that will need to be taken care of. Although the actual fights with the grunts can get a little tiresome, the level as a whole is enjoyable and has enough variety for its length. Design uses an enhanced and more detailed version of a typical Black Mesa style with logical construction, and the lighting is moderately well lit throughout.

Encamped by Dred_furst
There is the interesting element during combat here, in which the alien slaves keep the marines under control. If they are killed, it can cause their group of soldiers to attack anything around them including allies, adding an optional tactic to fights. These however mostly consist of short bouts with very few enemies at a time during a majority of the level. Progression is pretty straight forward, nothing too difficult to manage and is rather linear in progression, going from room to room taking care of enemies or some other form of obstacle. Design is mostly above average using a simple yet unique style, which doesn’t always seem too consistent at times. Nice little effect with the engines however and there’s a neat secret location too.

It’s Safer Here by tottmaster_c
This is, unfortunately, a short level in which you find yourself in the world of Half Life 2, with the citedal standing tall in the distance. The area is infested with headcrabs and zombies from what appears to be a recent attack, as you wake up soon afterwards. At least that’s the impression I got. The very start of the level may seem to give a wrong impression concerning it’s design, which appears to be above average at best. It’s not until you drop down the nearby hole, the quality increases a lot, with more crisp and detailed environments. Many elements of level design are imitated from Half Life 2, while sticking to the usual means of mapping instead of models, in which you’ll come across headcrab canisters, combine structures and vehicles and even a canal system created in a similar fashion as those from the game. The combine make an appearance too, even if they are simply a model replacement for the military grunts, but it adds a lot of consistency with the chosen setting. It’s a short level as mentioned, with small fire fights, simple puzzles and rather linear in progression, but an enjoyable experience nonetheless.

Labcoats Required by Ansith
This one goes for the standard Black Mesa theme in which your sole goal is to escape, while many creatures and troops will attempt to put you out for good. The level design is for the most part, average with a lot of large and fairly empty locations with some dull use of lighting. Noticeable oddities within the design include the huge and bare looking restroom and the decision to use a wide platform lift which takes you to a tea room where a staircase would have sufficed. The level is really short with rather average skirmishes against the enemies, and an overall linear progression toward an abrupt ending.

Second Wind by CampaignJunkie
You start the level by being kicked off from a tower and left to fall to your death, failing your mission. Lucky for you that some creature is there to save you from drowning. Once awake, you decide it’s time to take another journey to reach the top of the tower once more. A second chance. One of the great things I found when starting this level up is the amazing visuals you’re presented with. The small beach lining the edge of a large cliffside with a building constructed within and on top of it. And throughout the level you will be presented with various detailed environments, a consistent colour scheme and good lighting overall. The variety of locations also help keep things fresh too, whether you’re inside or out. From the lower parts of the fortress fixing pipes in the basement, trekking through dark caves, to the richly decorated upper quarters. The main task is to make your way to the top, while solving simple puzzles, finding little secrets and fighting a good selection of enemies. Solid, enjoyable map with a nice balance in progression.

Starlabs: Satellite Trouble by SEThorian
You take the role of Carlos Freeman who needs to reactivate a satellite uplink to send launch co-ordinates to Black Mesa, but there’s trouble taking place in the Starlabs facility and this makes matters a little more difficult. From the get go, the pacing is slow but quickly picks up once you’ve made your way further inside, with a small amount of backtracking and smaller tasks to take care of. I couldn’t help but be reminded of a mix between the design of a base from Poke646 and the text messages from Someplace Else when playing through this one. The overall style is presented differently however, even while using similar textures. Level has a good design steering away from the typical Black Mesa theme and includes consistent colour variation and detailed environments. One location to note is the area in the fourth screenshot below, a detailed storeroom while the crates holding a yellow substance contrasts with the darker colours. Combat throughout include a mix between marine grunts and various types of aliens ensuring some variety during fights, whether they’re taking place in corridors or larger rooms.

The Scepter of Ra by Firebender
At first, this may seem like a very short ride as you get through most of the first level, only for the author to throw in an extra dosage of material later on. This one also takes on a different touch by providing an Egyptian theme for a change, and plays along with that all the way through, including the enemies. The first half is very simple to get through, nothing too difficult with few enemies to face and not many places to traverse through. The second part is where things pick up, the mood changes and things get more interesting. I’d rather not say too much to avoid spoiling it however. Design as a whole works and follows the theme closely. Sometimes areas can be a little flat in places, especially in the longer corridors within the tomb, where more detail could have made things more visually interesting. Overall, the level is a nice experience with a refreshing change of theme.

Conclusion
This pack as a whole surprised me quite a bit, since these days I am not too fond of the shooting aspect of gameplay found in Half Life. What I did find was a good selection of quality maps with a wide selection of themes and locations, giving the player a lot of variety in terms of gameplay and design. Reissues was an enjoyable experience, even with a couple of fairly average levels, I found the pack as a whole worth my time and if you should give it a spin if you haven’t yet done so.