What Lies Below – The Crusade for the Old Quarter 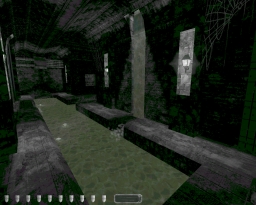 Introduction
Dwelling deeper into the third review for the countdown to halloween, this time we’ll be creeping through sewers and sneaking past haunts and shadowy figures. What Lies Below released back in ’06 originally for the Water Contest, takes place after the events of Thief: Deadly Shadows. Your goal is to get through the sewers underneath the Old Quarter so that you can remove the Keeper glyphs blocking the way, so the Hammerites can enter the catacombs below the Cathedral to destroy a runic tablet, the Necronymus. What awaits you? What lies below?

Gameplay
The objective is obviously more than what it seems, especially considering that you need to cross various sections of the sewers before you reach you final goal. Add on the fact that this mission isn’t going to be a walk in the park either, it’s rather difficult and at times fustrating. Though I couldn’t help but feel achievement as I get past each section, and looking forward to things that lie waiting ahead. This is one of those missions where care, a lot of patience and a good eye will take a major role. The enemies you’re also trying to avoid are also a bit of a bother as well, being translucent and hard to see at first and that is where the creepiness comes into play. You’ll hear their whispers first and soon realise you’re in their patrol path. Very tense, exciting and actually pretty scary. 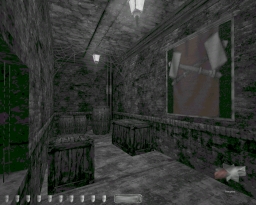 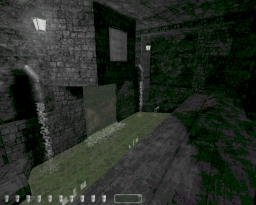 Each part of the level is divided up into several sections, each one acting like a checkpoint after passing through the previous one to solve more problems ahead to continue onward. Generally, you’ll be pulling switches and navigating between areas until you can gain access to a new spot, sometimes backtracking while avoiding enemies. Although the enemies can be dealt with by using some of the tools you can buy at the shop, such as frag and holy grenades, it’s usually best to just keep away from them. Other times you’re looking out for glyphs upon the walls which lead into hidden areas which hold vital things for you, including readables from Keepers, either leaving clues or further explaining the story. You’ll also come across readables from the Hammerites that used to work down here too, so both factions leave bits and pieces of the plot for you to invest upon. Sometimes finding glyphs can be tricky, but usually if you cannot progress it’s best to look around really carefully in the new areas you’ve entered, or find other subtle hints as to where you should go next to unlock a specific part. The last area is probably one of the more fustrating parts, but with perseverance, it’s definitely possible.

Design
The visual style in this mission takes a step back and heads into a different direction, going toward a greyscale appeal, with a few monotone colours being used; greens, reds and blues. This creates an atmosphere within itself, the dark gradients of grey add a lot to the tension and creepy mood. Especially when the new haunts that roam around the sewers use a blue tone that ever so slightly contasts with the environment. Greens are used to showcase the sewage water, that flows throughout the tunnels of this level, while red is used sparingly. These are also the three main colours used for glyphs, so it makes sense for the mission to make use of them elsewhere, however it can sometimes break the visual style by doing this. 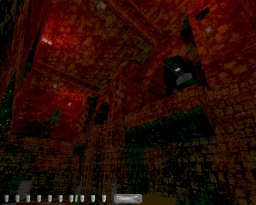 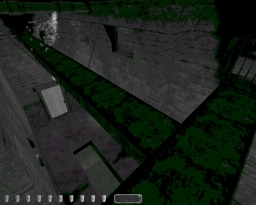 Now concerning the general aspects of the design, what more can I say other than it’s fantastic? The environment pretty much looks how you would expect a sewer may look like, with long channels, water flowing between sections, gratings on the ceiling looking up at the streets above and the various rooms with turbines or for other general maintenance purposes. These areas aren’t too flat in shape either, where some walls have indentations for lamps to sit between, pipes running horizontally along the walls or vertically into the ground. Depending on the section you are located within, there are other little design aspects you will notice, and this keeps each location fresh to look at, especially considering the theme is a sewer. Lighting is pretty moderate, but the use of grey colours leaves the dark and eerie tone to remain, and sometimes a a lot of darker spots too. Textures are detailed and used well across the level, nothing really feels too bare or overdone. It just looks fantastic. 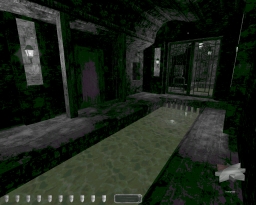 Conclusion
This can be a difficult mission to conquer, but rewarding upon doing so as you progress between each section, all set within a fantastic looking sewer with an interesting twist in its visual style.