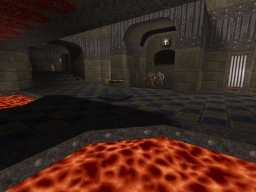 Introduction
Welcome traveller, to the House of Spikes. This small level takes place within a runic theme, released back in ’01 which should provide a good ten minute enjoyment of your time.

Gameplay
There isn’t anything out of the ordinary in this one, it’s a pretty standard map where you must gather keys and find the exit while fighting against the usual enemies. The gameplay is pretty solid for a quick, little challenge with plenty of enemies to fight against, including a good ammo and health balance. Nothing exactly difficult, except possibly the ending where you must take out two Shamblers. The map contains five nicely hidden secret areas which are enjoyable to locate and not too difficult to do so. 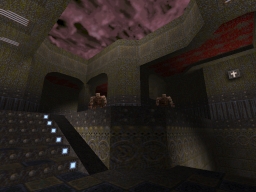 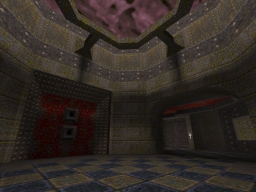 Design
The map has a good structure throughout, and makes use of a small selection of metallic textures consistently for the most part. Areas aren’t particullary big, but remain wide with enough detail scattered around the level. The map has a lot of arches for a variety of different sections, but commonly used for entrances and windows. To add a bit of contrast, a blood stained metallic texture is used a lot for ceilings and some blue light textures on staircases, which prevent places looking too monotone. The lava however doesn’t seem to particullary fit very well in this map, and considering the title, pools of blood would have probably been more suitable and mixed well with the blood stained metal. Lighting is generally fair, keeps important sections well lit and works out fine but nothing really significant about it. 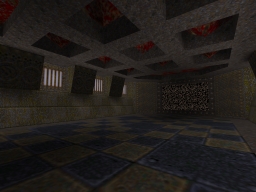 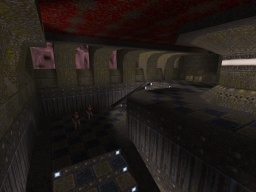 Conclusion
Standard gameplay which is fun and balanced, with a fairly consistent and solid design.