Thief: The Trail of the Arch-Heretic 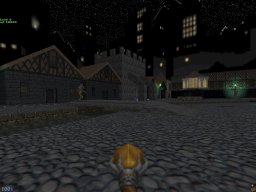 Introduction
Thief: The Trail of the Arch Heretic is a level that intends to take the feeling of Thief, and create a similar setting within Heretic. You take the role of Garrett, the main protagonist from the Thief series, who has been contacted by the Keepers about some dark magic surrounding Lord Bafford’s place. The City Guard and Hammerites aren’t doing much about the situation, a job which is more suited for them to handle. However, rumours about unusual gold coins and jewels turning up on the market has taken his interest, most likely coming from old Bafford’s place. Garrett decides to pay another visit.

Gameplay
Upon starting the level you’re introduced to a small objective list screen with the three tasks that you must do, following the usual approach from the Thief games. Despite the fact this level is intended to follow Thief to some extent, the gameplay is pretty much that of Heretic where most of your fighting will be against Golems, Undead Warriors and Disciples. There is however the neat addition of the loot system, which is completely optional but fun to do and brings that thieving charm to the level. Action for the most part is pretty moderate, and may get quite hectic in the larger outdoor sections and tight corridors of the manor you’ll later access. Ammo and health is pretty sufficient, with a large choice of weaponry and powerups scattered around. The level definitely approaches the unique atmosphere from Thief, making use of the sounds from the game quite well including an occasional line from Garrett placed in suitable locations here and there. 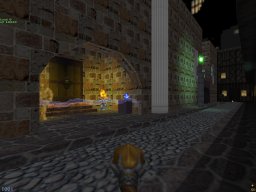 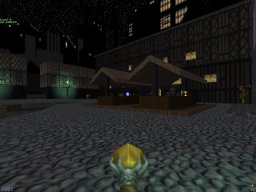 Design
Using textures from the Thief games, the level takes on a town theme with a sewer area and Bafford’s manor itself. Interior locations do seem to take a smaller and more simplistic approach to design compared to the exterior areas however. The manor is decorated with a few furnishings and bookcases per room, while Hammerite banners and few paintings fill the many halls. The first section of town is a set of long streets and buildings along the side, until you reach the market area which is a fairly open location with some decent looking building structures nearby. This includes the neat usage of 3D floors to create some sloped rooftop segments, market stalls, other various building shapes and a river. To add a little more to those Thief details, the street lamps also follow a similar scheme of design going as far as having a glowing orb on top of them, and later you’ll come across small mushrooms producing a slight green tone of lighting. The lighting as a whole is pretty moderate, the streets are fairly dark with the odd street lamps to provide light, while the sewer areas look dark and damp. The level pretty much follows Thief concepts pretty well, including the usage of textures. 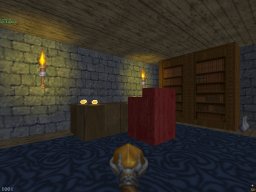 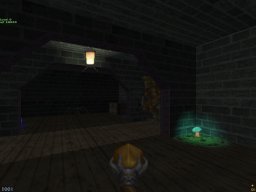 Conclusion
It’s a neat blend of Thief and Heretic, with some moderate, yet sometimes hectic gameplay with a pretty decent design throughout.