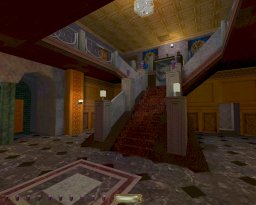 Introduction
Garrett was contacted by a man named Grimworth, who has offered an interesting proposal. Lord Robert Farrington, an eccentric collector, has recently passed away leaving his two sons to argue over the inheritance. Grimworth wants you to find Robert’s last will and steal all the objects listed in it. In addition to this, he would also like you to find any evidence concerning rumours of a long forgotten mages order below the manor. Unfortunetly, upon making your way over the wall toward the manor, Garrett slips on some loose bricks and loses most of his equipment on the other side. Either way, you need to find that last will before the heirs do.

Gameplay
From the get go you’ll be without a blackjack for a while and left with your sword and some useless broadheads when playing on expert. Depending on how soon you locate a replacement, the flow of the mission will considerably change. Your first task is to find a way inside of the manor, and from here you’ll proceed with your objectives. The blackjack replacement is technically pretty close to the start, so grabbing it early will make most of the manor easy to walk through. On the other hand, accessing it later will make the mission a challenge and actually a lot more fun to play, since the guards aren’t particularly difficult to avoid with plenty of rooms to hide in. Though you could still easily have minimal usage after aquiring it anyway. The Farrington manor isn’t exactly huge, yet it does have plenty of areas to explore and secrets to discover. The exploration is one of the most enjoyable aspects this mission offers, since there is a nice amount of loot to find, secrets places that are just awaiting to be found, and your various tasks to complete. Upon finding the last will, you’ll be given some additional objectives which will eventually lead you to explore deeper beneath the manor within the crypts and backtracking to previous locations to unlock new areas. 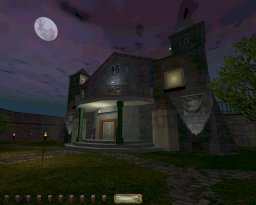 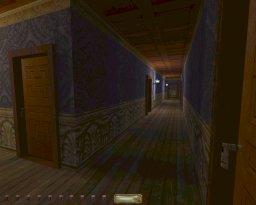 Throughout the mission you’ll come across a few puzzles which need solving, but these aren’t exactly difficult to solve and are a neat addition to step away from too much lockpicking. An interesting note to point out is that the author added a helpful element to how documents work as a whole. Every document that Garrett places in his inventory has some form of importance, or clue to solving a puzzle. Pretty neat to save time having to relocate a specific document, or cluttering your inventory with useless stuff. From the beginning of the mission the story as a whole starts out on a pretty simple tone; find the last will and steal some objects referenced within it. However, as you progress through each of your objectives, things are more than what they seem. Many twists and turns take place in the mission, which keeps you on your toes and adds a lot of nice bit of depth. Ominious Bequest really has a lot to offer.

Design
There are actually three distinctive locations within this mission, each centralising their own style of design that actually differs from the others. The manor is a medium sized estate, with two floors and two attics. The lower areas mostly consist of simple brick based, servant rooms, kitchen and spiral stair ways; a central garden with a white marble theme and fountain in the middle, with a small greenhouse to the side; a lavish looking main hall with various splashes of colour surrounding the place. The upper floor is accessed from the main hall and far spiral stair cases at the back of the manor. The corridors above here surround the central garden, with many differents rooms along the sides. The upper main hall gives access to a dining room and lounge area. For the most part the manor looks pretty, has a solid structure, is consistently designed and quite spacious as a whole. 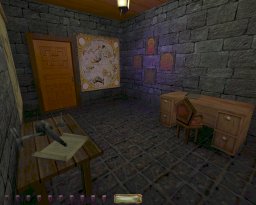 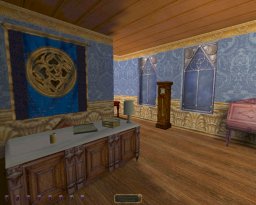 Then you eventually come across the grand looking Hammerite Church, using a much more darker tone as a whole, compared to the earlier manor interiors. It does look like a typical Hammerite location however, with the symbolic Hammerite icons and stain glassed windows. This part is a relatively small section overall, but works as a nice contrast whichs blend into the crypts that soon come after. A great addition is the large organ at the upper level of the church, which will even play a tune upon frobbing it. The crypts below the church are actually rather mild in design. They at first appear dark, but with later parts, are well lit which in their own way adds a fair creepy tone further enhanced by the etched face carved in stone, used several times along the walls. Progressing further into the missiom, you’ll come across a variety of many locations, each taking on their own design scheme to contrast from a previous areas as to not look too much the same. 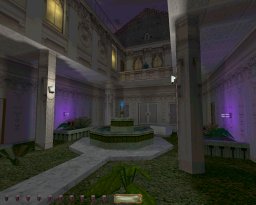 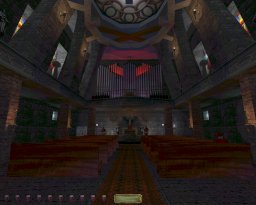 Conclusion
The exploration, secrets and story are some of the major elements which make this mission a fun experience. The design has plenty of significant variety between the different sections of the map and as a whole looks good.