The Hammerite Imperium Mission 1: The Seven Shades of Mercury 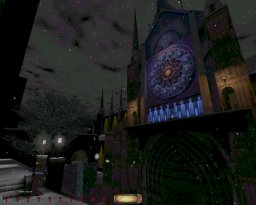 Introduction
My name is Shivan. I am an acolyte at the Excantium Academia, where we endure a grueling education and indoctrination into the Hammerite Legion here on the island of Tallia. It is the night of graduation, and per the tradition, the format for the final examination pits the seven teams of the graduating class against one another. The goal is simple: Capture as many of the other teams’ icons as possible whilst defending your own.

Gameplay
This isn’t exactly your typical style of Thief mission in the way it plays and sets itself as. From the beginning you lack any form of weapons and tools which makes your first priority objective to locate and retrieve your equipment. This is where the mission keeps you on your toes, adding a very tense atmosphere during the early stages of the level. Patience is deffinitely a major key while you avoid contact with the other teams and it is wise to carefully explore your surroundings. There is an extremely awkward jump you need to make during the early stages of the mission, but luckily it is the only one throughout the entire level you’ll need to do. Upon finding your comfort zone, the blackjack, the general difficulty will slightly drop if your preference is to knockout your targets, otherwise things will remain tense here on out especially during the later stages against the Silver and Black teams.

The flow of the mission will differ depending on which order you choose to seek each of the different teams’ icons. However, in general, each team has a specific trait regarding themselves or their location. For example, the Blue team aren’t much of a challenge at all, while the Silver team has a special armour preventing knockouts and making them impervious to gas arrows. Gold team are located in a part of level with a lot of marble flooring, patrolled by guards on the ground floor and upper levels which forces you to be patient and take your time while roaming between rooms. The variety is a nice feature to the mission since it will keep the situation fresh for dealing with each different team. Guard patrols are easy to remember and your map even crosses off locations where you could expect them to be for most teams. It’s actually possible to avoid each of the different teams, making this mission possible to be ghosted. 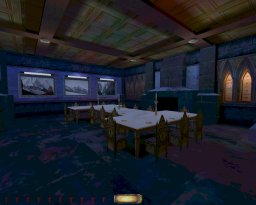 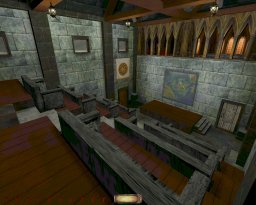 An extra piece to look out for are the few traps laid out by the various teams, so take a small look at your surroundings before rushing into that dark room that may look innocent and welcoming, or you may meet an early doom. A wide selection of readable books and notes can be located throughout your mission. They consist of various different texts to give the place an occupied atmosphere of a school. You’ll come across a lot of loot scattered throughout the mission where you’ll find a collection of treasure for the taking, which will actually be more than even the highest difficulty goal requires you to get. There are also plenty of neat little secret areas littered about that are also fun to look for while exploring, sometimes they contain loot or helpful tools for completing your tasks.

Between the various areas, lighting worked out fairly well and remained pretty balanced. The school area with marble flooring had plenty of dark corners, while other sections just had a torch that could be easily shot out if needed. Various rooms along the side provided had useful light switches that rendered the place a good hiding spot away from the corridors. I did find the cathedral section too easy to traverse through however, because it was mostly dark and extremely wide. 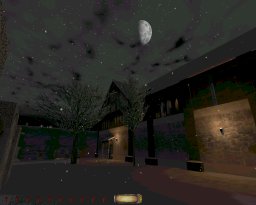 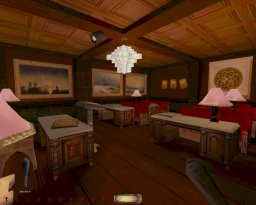 Design
During the earlier segments of the mission as you creep through the sewers, the design is fairly simple and plain. But once you emerge into the main areas of the level, specifically the academy and cathedral, it’s a brilliant sight to see. Each location is beautifully crafted and the cathedral is a stunning, grand piece of work. The academy takes on a fairly simple layout, two floors, a courtyard in the middle and a set of corridors along the side. Marble is used throughout the corridors which gives them a cold feeling, especially as blue lighting shines through each of the side windows. Each individual room that can be accessed from these corridors have a rather warm ambience to them. The touch of pink lamp shades in the classrooms actually work very well, adding a slight subtle contrast to the mood. Even small details such as the arches for windows, the beams across ceilings and paintings along the walls blend together and creates and overall completeness. This can be said for a majority of locations throughout the mission. 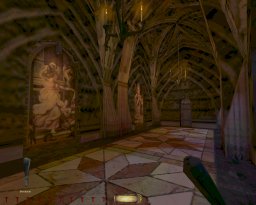 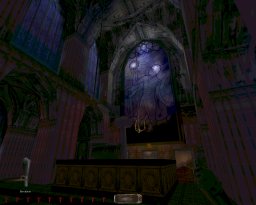 The Hammerite Cathedral in the Excantium Academia is an extremely grand building with a very tall arched ceiling to match. Hanging from the ceilings include many chandeliers which add a slight warm glow to the extravagant details of arches and large paintings throughout the halls. The cathedral has an aura of importance within its large size. Below the cathedral are the dark and eerie basement and catacomb areas, with their long tight hallways and creepy rooms work quite well for the Silver and Black teams. There is also a grand library section on the school grounds which has a great looking design including the ceiling but the layout and overall appeal seems too flat, especially on the lower floors where more bookcases would have probably worked well to give it more purpose.

Conclusion
The first mission in the Hammerite Imperium series includes some early tense areas and an enjoyable experience all round, excellent design throughout with some pretty grand and rich looking locations. I recommend playing on the highest difficulty which asks you to retrieve every teams’ icons, to get the most out of this mission.