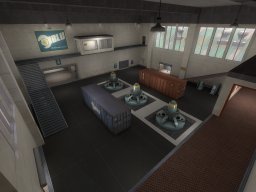 Introduction
Turbine is a Capture the Flag map by Bill Johnston that takes place within a large industrial compound. For some peculiar reason, RED and BLU are both sharing the same building while trying to brawl for each other’s intelligence in only a few key locations. This is actually my first Team Fortress 2 level review and I barely even write multiplayer related articles, so please bare with me while I get used to this!

Gameplay
Turbine is a rather simplistic CTF map with only a few actual key areas to battle your way through to grab the intel, pretty easy to learn and you can get used to the map itself really quickly. However, all is not what it seems. The first noticable location is the large, single spawn room on the left most side of the base with the next key location to the right of this, the intel room, and ahead from both of these locations is the large central room. Each of major locations are actually rather large and wide, which makes navigation easy, but it can also become your worst enemy in this map. Because the locations are essentially wide, it makes you a much easier target dispite what class you choose from. The initial layout of most rooms seem to focus on a few specific classes such as Engineer and Sniper, while shunning a few others out the way a lot of the time. There is also a side route close to spawn, the ventilation shafts to access the higher platforms in the central room behind some cover. or toward the intel room where you can literally, drop in.

The general layout of the map is probably the biggest problem. First of all, the only side route you can take are the vents, however, these become a very tight chokepoint making them very risky to bother travelling through since there is barely any space to avoid enemies and it’s a huge blind spot around each corner. The vents would have possibly been better with more alternative places to turn into and less of those long and narrow sections. The second biggest flaw with the map is the balance with Engineers and their sentries surrounding the intel room, since a lot of the time the defense is unpenetrable. Of course this would depend on how the team plays well together to break this defence, but many times I have seen this become unsuccessful and almost seems as if the map is favouring Engineers too much in these locations. 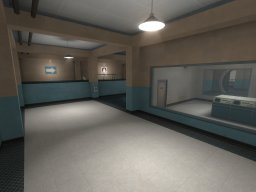 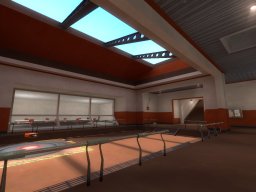 Scouts are possibly the most useful class to grab the intel and cap it as fast as he can, but if this map has more than one Engineer playing, he’ll be rendered pretty useless if the rest of the team can’t get there to help out. 2fort has a similar style of location for it’s intel, yet there are two seperate ways into the lower basements and two routes into the intel room itself on an overall smaller scale, making it easier to approach sentries with an Ubercharge, Demoman stickies and even a spy. Sentries are too powerful in open spaces since they will keep most players knocked back a majority of the time. The large central location also has its fair share of problems with sentries as well, especially if there is more than two of them. Otherwise this location pretty much turns into a general deathmatch arena either trying to claim the room to hold the enemy team back or to see who can get to each other’s intel first. This pretty much keeps the level to a halt with barely any progression being made a majority of the time and mostly falls down to luck whether or not you win or lose.

As for the supplies scattered around the level, generally there is ammo boxes in the intel room useful for Engineers to build or Pyros to defend. For some reason there is even an ammo box outside near spawn, possibly useful for the enemy but initially seems pointless and adds fuel to the fire for spawn camping Demomen. The largest room also consists of two medium ammo boxes and medkits which tends to drag out battles in this area too much, making it too easy for some classes to dominate over the others creating a neverending battlefield. 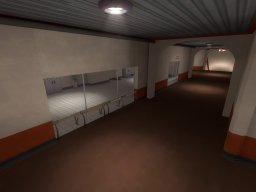 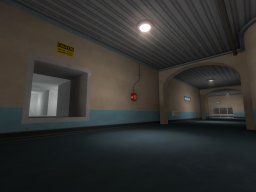 Design
Turbine is a map with a pretty large scale to each location, but falls down to a very simplistic and rather lacking design for the most part throughout. The main central room is the largest of them all, a big box, with some models and other elements thrown in there to fill it up. On each end of the room are catwalks with a small area for cover near the vent, and unaccessable doors on both sides of the walls. There are also some large windows overlooking the roofs outsides, though nothing too special in the form of a good scenery. The middle then consists of machinery and two large containers, one for each of the different teams, which doesn’t exactly flow very well. How did they get there and what is their purpose besides being minor cover?

The bases themselves are pretty much two corridors and a vent leading toward either the intel room and spawn room. There are some arches placed around, and two inaccessable locations to make the place seem slightly bigger. However the design in these locations are pretty average while being lit quite well, but for the most part flat in terms of detail when compared to the official maps by Valve, the location itself feels a major lack of purpose actual location theme. 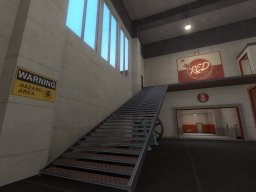 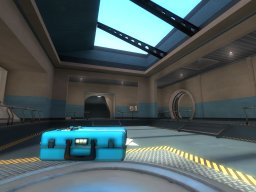 Conclusion
Turbine is a simple and easy map to learn, and especially accessable for new players. However the layout of the map is too wide working against some classes while favouring others too much, creating an endless struggle for the intel. Design is also flat and lacks an actual theme and purpose for the location itself.