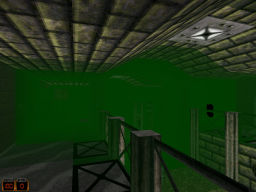 The sewer system of Helltown wasn’t always what it should have been. Bad maintanance and the illegal dumping of chemical waste have made it into one of the most dangerous places (next to Duke’s toilet). Since many years no-one dares to go down there. The machines just keep running but for how long? It wasn’t very long ago since the first monsterious sounds from the sewers where heard by the people living above. The city council didn’t took much time to come up with a decision. Some one needed to go down and verify what’s going on. Luckily for them they picked you for this revolting job. So grab your pistol and put on a gasmask because it ain’t gonna be pretty. You’re going down Duke, to shoot stupid monsters.

Although I’m not personally a big fan of sewer levels, I decided to check this one out with an open mind since it’s a fairly recent release. A singular level which makes use of the features found in Duke Plus by Deeperthought to add extra gameplay features to the map.

Gameplay
Deffinitely quite an action packed level which makes use of the new features fairly well but quite limited. You’ll start off as per usual with your pistol but soon after collect newer pieces of weaponary along the journey throughout the sewer, while fighting off enemies trying to survive. No major key gameplay role that takes place besides run and gun action, while keeping an eye on ammo and health supplies. New enemy variations can be found thanks to the features of Duke Plus, which is usefully included with the level, such as the lightning projectile Octabrain and turret drone. These aren’t too difficult to handle and the action over isn’t anything special either. Other effects found in Duke Plus aren’t present in this which could have worked well, such as slippery surfaces on the leaks of sewerage found on the metal floor. 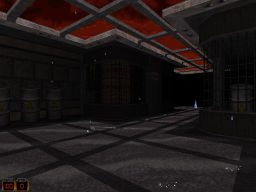 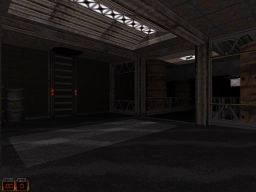 Design
First thing to notice is the use of green fog which isn’t often used in releases. Here however I found it half fitting and half bad looking. The green ambience it gave off deffinitely made me feel like I was in a sewer but the deep green further in the distance also broke it. Other than that it has your typical sewer texture set in a set of tunnels and rooms that work the sewer. Most of the action takes place in the maintenance and other rooms rather than the sewer tunnels themselves, which work like a hub between areas. Some areas fit well with the theme such as those with pipe work and machinery while surrounded in darkness making the place look abandoned. Other areas were well lit as if still being used by the enemies, or due to a quick evacuation from the employee’s. What would have been nice to bring the mood up even more was more usage of moving machinery and ambient sound effects to match. Use of textures fit well with the structure of the map making use of the typical sewer set while mixing it with a few others. Spritework has also been added to give the sewer a more functioning look with devices and pipes on walls.

Conclusion
Short, action packed that makes a limited use of the Duke Plus features taking place in a fairly well designed sewer map. 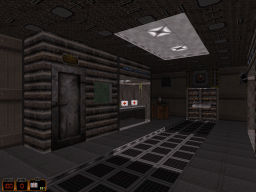 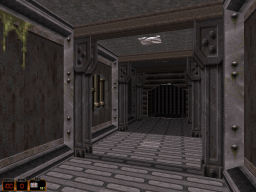