Gameplay
You take the role as Jamil Lee who was caught and imprisoned in Nova Prospekt. The door of your cell opens of which you decide to take revenge and cause your own riot act. You take control just inside your cell and the adventure starts pretty much here and throughout a series of maps that take place in Nova Prospekt. However the modification is a very enjoyable one at that with plenty of variety, action and locations with a decent sense of flow. This one includes some new voice acting, not a whole lot but a good amount to make some of the cutscenes feel fresh when encountering them, such as the one at the start after going up the flight of stairs. 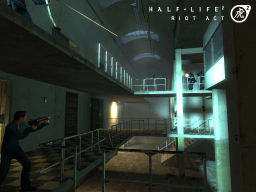 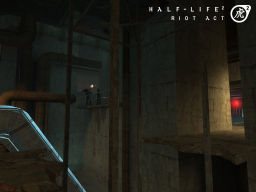 The modification pretty much plays like the original levels of Nova Prospekt with your Combine Soldiers in balanced amounts to the respawning Antlions either attack you or helping you out. As already mentioned, the flow is really good from location to location as you take short breaks, solve a simple puzzle or pull a switch then back into combat be it small or large. Difficulty can range depending in what location you’re at, but there are plenty of resources and some other rebels to help you out. Weapons the player recieves during play are given at a slow but controlled rate, they aren’t all thrown into your hands during the early maps but spread out between them which adds to the challenge of using what you have.

And then you have variety be it for a few seconds or several minutes as you’ll encounter different locations and enemies to match such as the Gunship fight or the railway bridge. Everything fits well together and almost feels like an expansion of the story rather than a modification, but lacks something brand new to improve that aspect that much more, but nothing too major of a disappointment. I was hoping for more near the end, but unfortunetly the adventure ended. 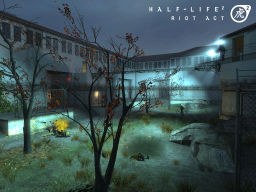 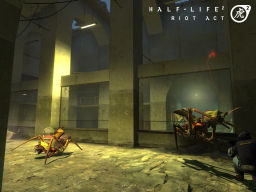 Design
Sticks close to that of the original Nova Prospekt and keeps consistant throughout with several other interesting locations to gaze upon during play. Design is deffinitely above average and top notch in the aspects of structure, texturing and lighting. The structure is pretty much solid, and follows the design concept of how Nova Prospekt was originally made. However other locations expand on this such as the lower areas and places that have Combine structure throughout in the later levels. Texturing is again close to the original with fitting combinations, used well throughout. Lighting is moderate and copies the original feeling of locations with its sickly, cold looking green-blue tones in larger areas while the yellow tones give a warm feeling that pretty much feels like a replica of the prison. This combination again keeps the levels looking well designed and consistent, feeling very close to the original game.

One thought on “Riot Act”