Wivenhoe – The Fall Of Ravenholm

Gameplay
Didn’t really meet up well with the name of the mod, and it was rather short to play through but each of the three maps has it’s own theme of gameplay. The first is targeted towards stealth were you must sneak past the combine and turrets below with no weapons and one health point left. Ofcourse the reason for being where you are with the current health limit and lack of weapons is unknown and isn’t explained. The follow task can be rather annoying as you will either get noticed easily or ignored by the enemy even though they could clearly see you which ruins the original idea for this section and could have been made a lot more enjoyable. The second map is more action packed fighting off some hordes of combine soldiers. You gather some weapons and earn a bit of health but it’s rather tricky to get through this part without dying a few times for some people, but some interesting scenes are also included here as well. Lastly, a horror themed interior section which leads back outside for some finish action. The gameplay can be a bit of a bore and difficult but nothing impossible to complete and the ending was rather disappointing as well.

Design
Above average is some places but the interiors were mostly average with simple structure within them and basic texturing. Outside were quite good looking with some interesting lighting effects and realistic prop usage. Some areas however could have looked a lot better though such as the starting areas. The puddles, rocks and trees had some sort of atmosphere but it lacked something to make it look even better, the same goes for the indoor areas as well which used far too many props to detail them.

Overall Conclusion
Short, average designed map that could have been approached better. 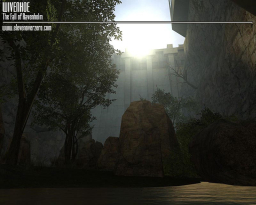 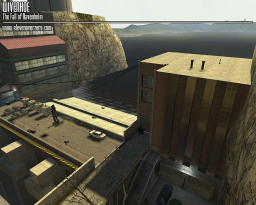