First part in a series, establishing itself as this massive urban playground where every progressive milestone is conquered by peeling away at individual layers that help fortify an alien infested city. Players will be working their way around the island’s outskirts, fighting through heavily guarded streets and leaping over rooftops, before towering over Woudrichem itself to contemplate their journey made to reach that point.

Maarten manages to piece together a subtle structural nuance in regard to level progression, creating a clear divide where one defining layer ends and another begins despite an inherit non-linearity across the board. To demonstrate this I’ll be breaking down theses layers tier by tier. Duke finds himself just outside town unable to gain any immediate access and must seek out a yellow key card. This involves taking a detour circling around the island toward a marina, gaining a feel for the town’s sheer scale and what will soon be an explorable zone. Not without a fair share of trouble of course, alerting many Pigcop patrol cars controlling its perimeter along their path. These guys have potential to be a distraction during more important encounters, forcing a decision based on current supplies at hand whether to deal with them sooner than later. By making wide loops around the island in staggered patterns there is always a chance to be shot from behind if wasn’t keeping them in constant check. Their presence is a welcomed one for the level’s size but also a double edged sword in regards to reliability as they often get stuck near roof edges or more annoying attempts to shoot them down won’t register properly instead wasting ammo. I’m uncertain if this is entirely a mapping issue or something else might be at fault. 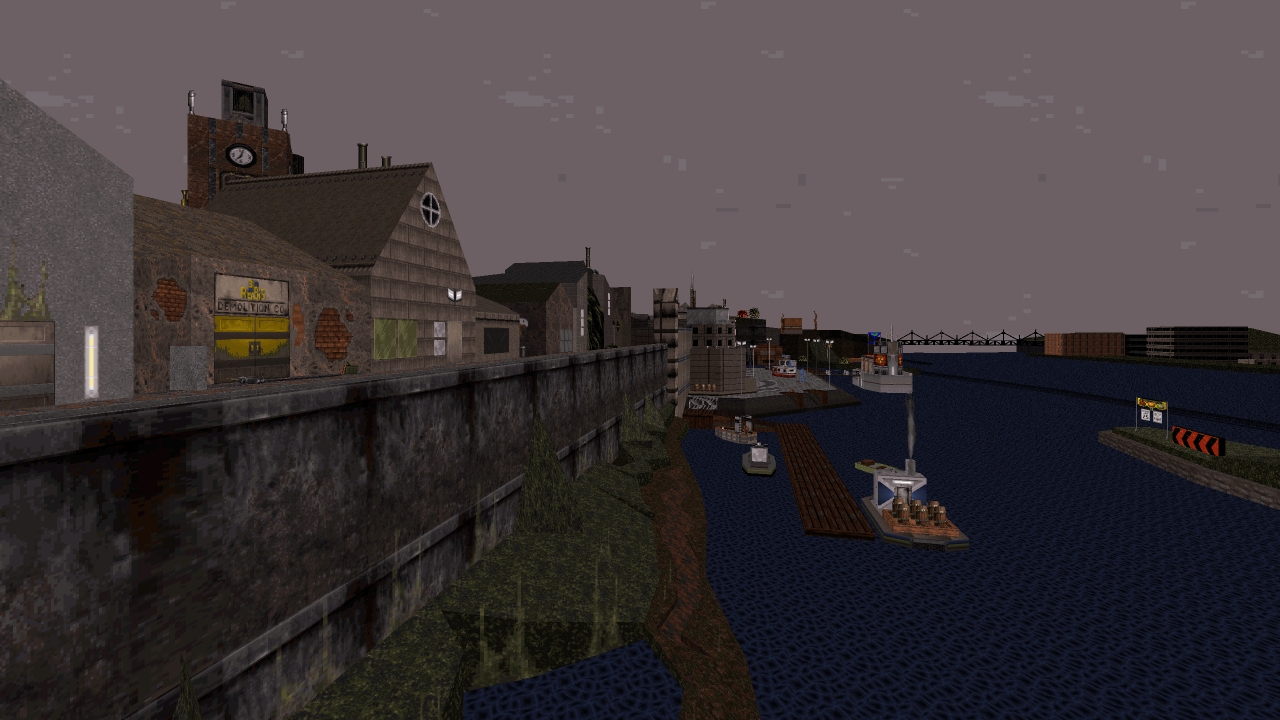 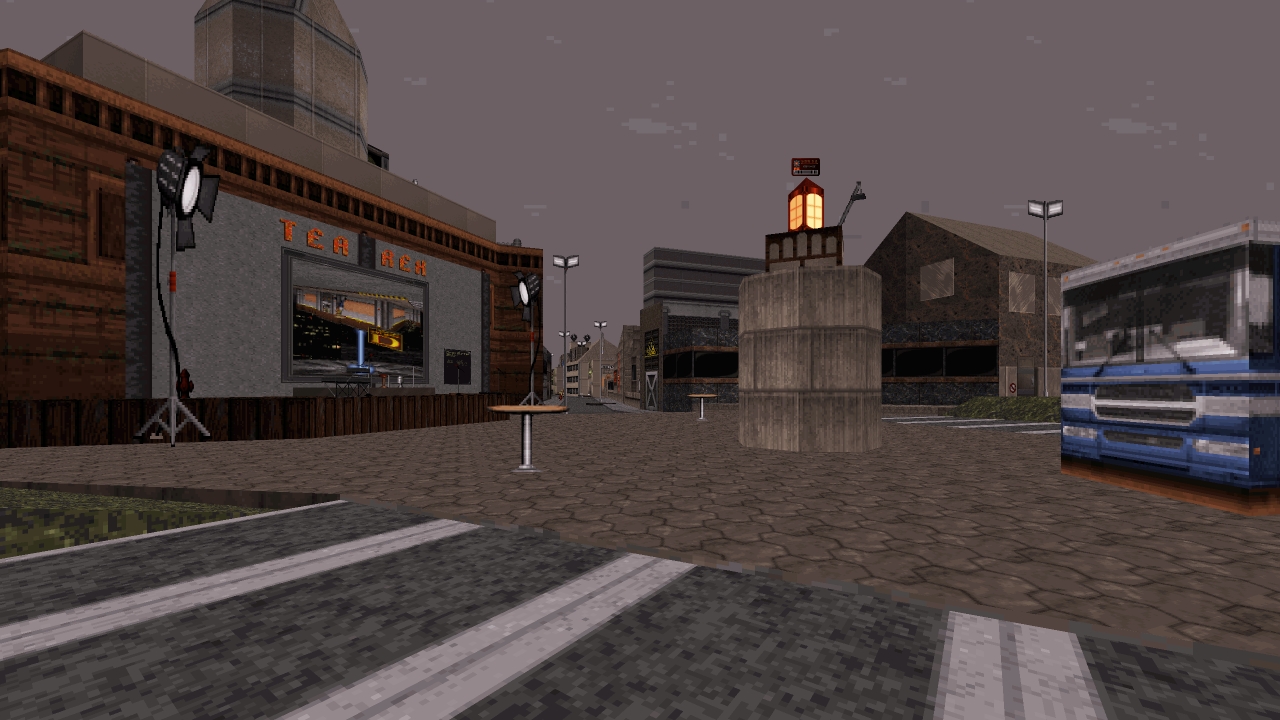 AAP1 is a huge, densely packed feast for the eyes oozing with colourful vignettes and wide texture variation across its numerous buildings. Not even a dull overcast sky can spoil Maarten’s vibrant mapping style at work here. Rather than focusing on singular intricate designs for each structure, construction instead uses many basic forms, providing a general idea that aims for grandeur in its representation of a town. In this instance it achieves effect over detail, while cutting it especially close to the wall count limit to craft a large scale environment. Each street section feels unique enough to provide a point of reference and rooftops have individual characteristics that compliment traversal in a later section. Woudrichem is based on its real world counterpart from The Netherlands and out of curiosity I looked up photographs to relocate familiar areas to understand just how many traits were poured into this rendition. While much smaller in size it still retains an island aesthetic, surrounded by water routes for boats docked along its edges. Sint-Martinuskerk is also present, feature complete with a clock tower as a prominent landmark from both a visual and narrative perspective. Old cannons are too dotted around as decoration, a subtle yet distinctive personal touch to stand out amongst Duke3D’s urban level collection. Other features that resonated for me include an outdoor stage where Tea Rex were last seen performing, a gorgeous windmill at the edge of town and a cute playground area that dips below an incline. 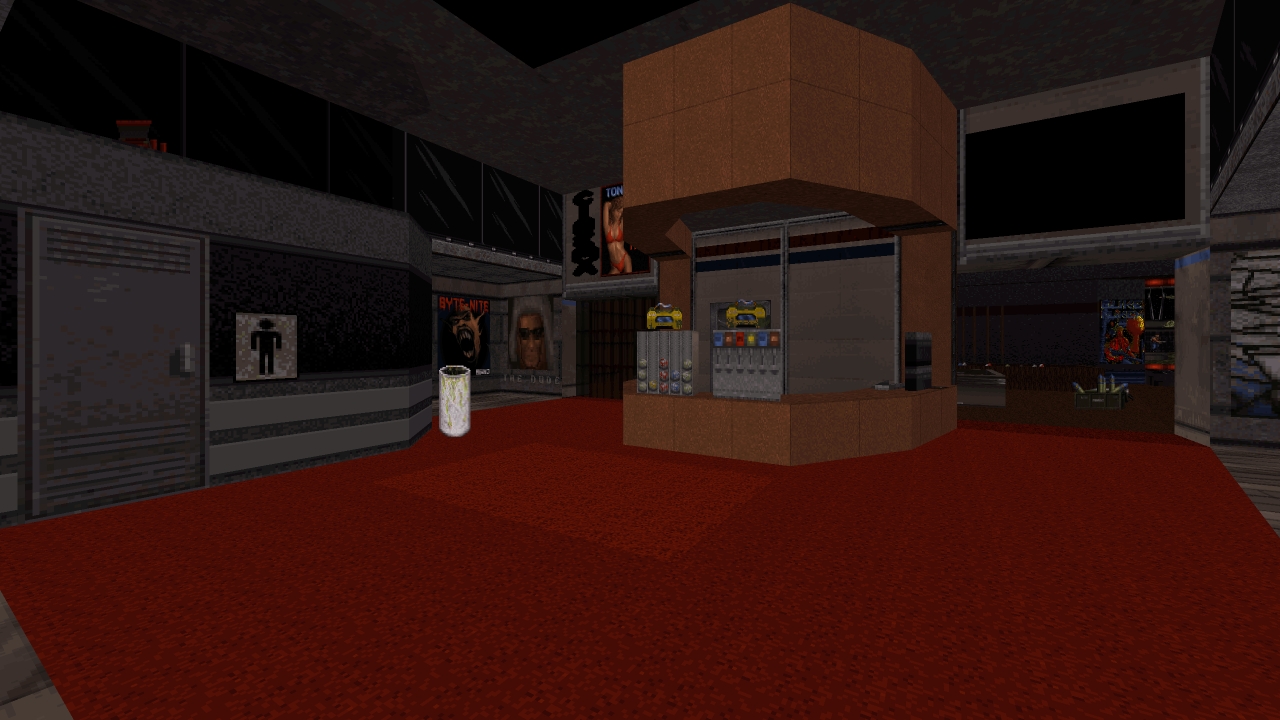 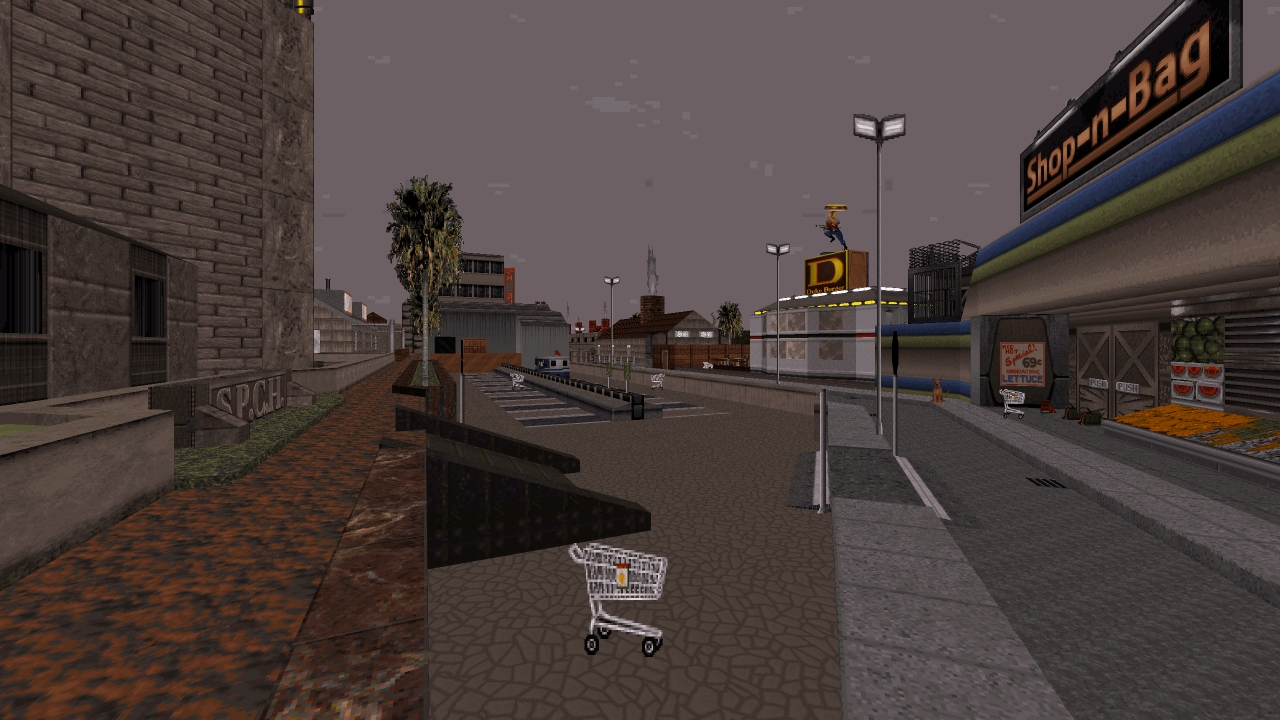 Opposition thrown at players is relatively mild prior to reaching the inner heart of town, our second layer, accessed using any of three available entrances after acquiring a key card. Combat then escalates to drive home Woudrichem is now a bastion for the aliens residing here. Streets are crowded, enemies vying for attention from all angles. Troopers will take pots shots from a distance as Pigcop and Enforcer ambushes close in. Patrol cars continue to reinforce air space while Tanks deny foot travel. This overwhelming presence ensures action is constant like a small scale war. Navigating around is otherwise free from too many physical barricades, an openness allowing encounters to be approached from any angle. Supplies are littered everywhere as most weapons can be snatched up all dependant on which routes are taken, while side paths and niches will often hide away the more useful tools. Players are left loose to rummage through town as desired, making choices whether to clear away nastier threats before taking to the roofs or dominating the high ground to their advantage. 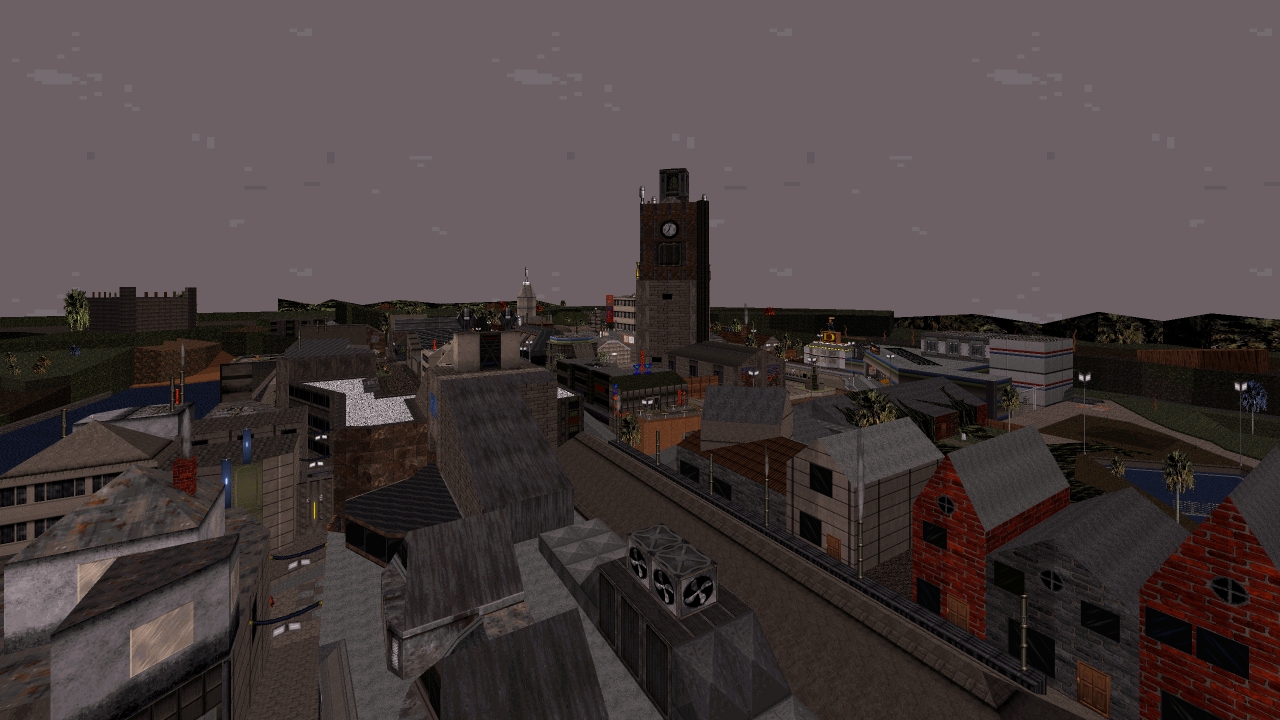 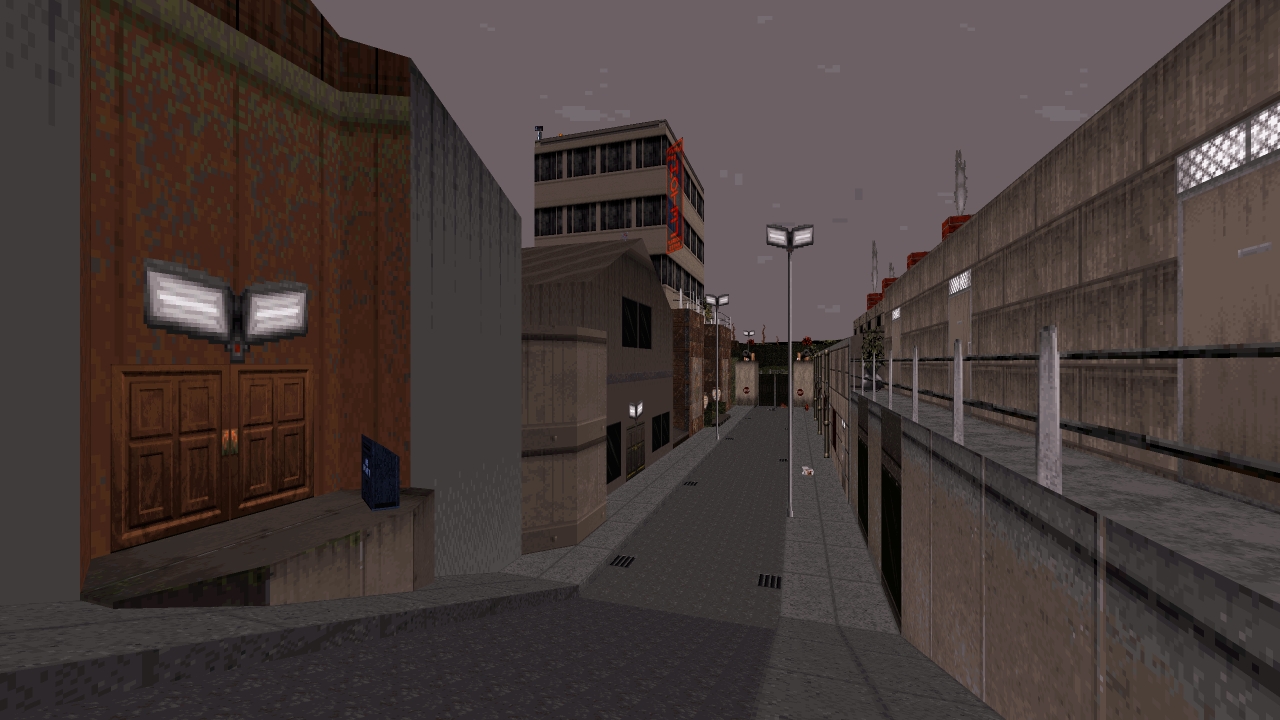 Our third layer then takes place up on these rooftops where three coloured keys must be found to provide access beyond the windmill gates. Security monitors provide an overview of this objective by showing their placement in relation to nearby structures to aid in finding them. Jumping from building to building becomes a focal means for exploration, providing opportunities to procure additional gear before progressing beyond the main task. Many times I would wonder to myself, “Can I go there?” and discover that I could, in most cases, barring only a few invisible walls on structures that should either have been taller or used fences instead. Finding access to high ground early also changed how combat played out on a repeat session, offering an easier means to travel around quickly at the risk of being a more obvious target without cover. AAP1 primarily takes place outdoors, so the few interior spaces that exist came at a nice surprise despite their tight fit. By contrast combat can degrade into simplistic corner peeking bouts and Protector Drones never have a fighting chance when their mobility is severely hampered. After players peel away all the main layers encompassing Woudrichem to arrive at its core, situated atop a clock tower, all that remains is one last ditch effort to prevent Duke from leaving after failing to keep him out. This finale concludes in a satisfying manner, since each layer had to be conquered before moving onto the next one, leaving our enemies fewer options besides sending out remaining reserves who were waiting on stand by. Jumping off into the smallest pool of water below just as they arrive is always a fun way to flex before throwing everything I’ve got at them, any excuse to recklessly expend all my munitions accumulated so far.

Maarten pulls off an excellent urban playground that focuses on constant action divided into distinct sections, offering open navigation and choices during combat. Woudrichem looks great by using scale to an advantage and pulling particular traits from its real world counterpart to stand out.