On a cold evening during the Christmas season, amidst an assortment of colourful festivities decorating the snow veiled cityscape, Duke stares upon a burning wreckage of his trusty postal van seconds before an assault from green runts dash onto the scene. Time to clean up this mess, hit the sack and be ready for an early shift tomorrow.

Despite a long and varied history of mapping, MRCK even to this day continues to expand upon his experimental methodology while designing levels, prying out any potential twist that Duke3D may have on offer. POISON HEART at its very core is another endeavour through an alien infested metropolis, yet manages to express an individuality supported by additional visual thematics and diverse gameplay involving an escalating combat focused scenario. One stark contrast from those quaint suburban adventures seen throughout MRCK’s previous releases is an increase in scale by use of high rise buildings, an aspect that immediately caught me by surprise and a choice that doesn’t depart from the usual treatment found from his brand of visual design remaining just as vibrant and meticulously crafted. The additional verticality injects greater depth for traversal taking players from the initial enclosed starting area, having them climb from rooftop to rooftop and balancing thin power cables to eventually discover secluded routes, small ventilation ducts and other entry points into buildings that continue further into the city. 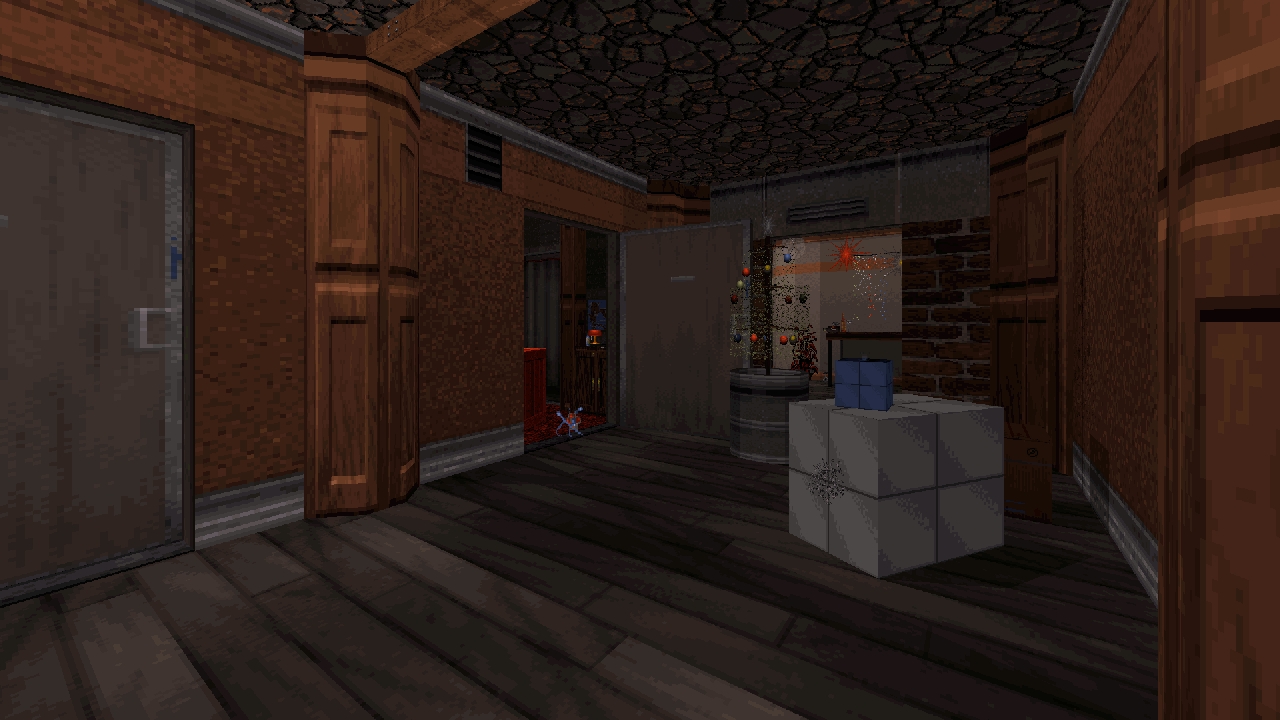 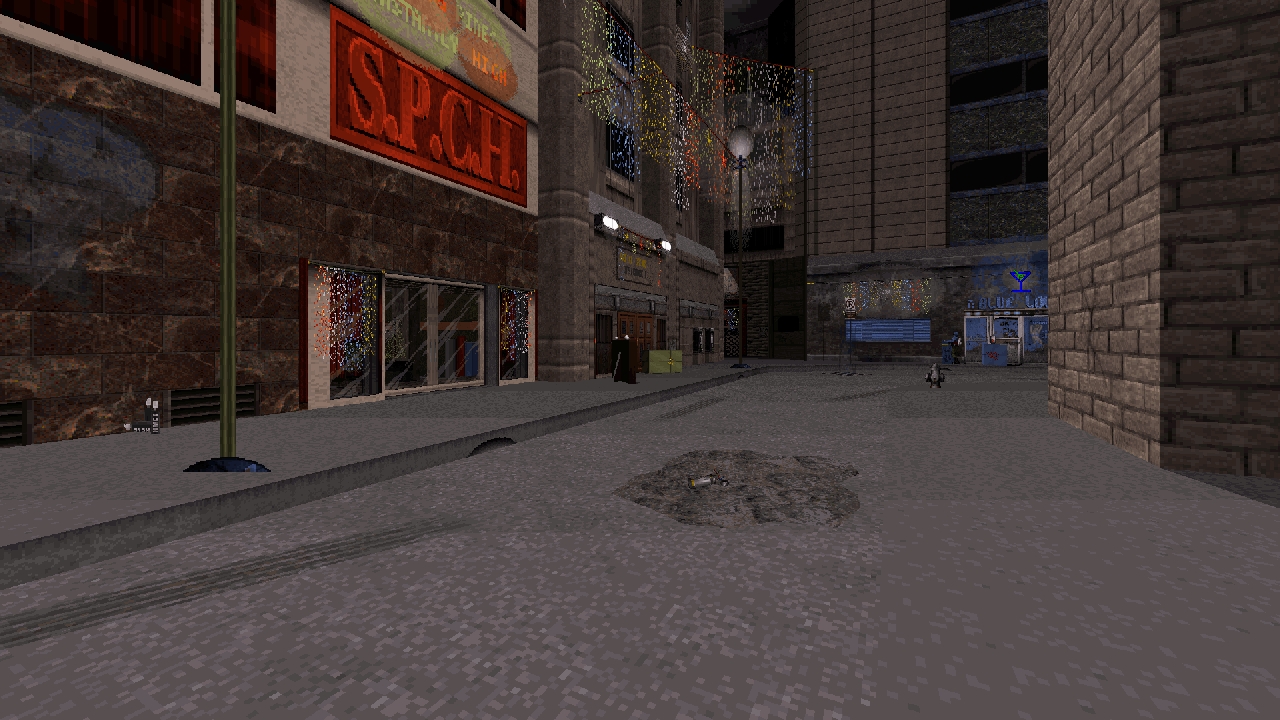 Every moment that comes before grabbing the blue key card teaches early on what should be expected going forward. POISON HEART doesn’t limit itself to any conventional gameplay tropes such as bog standard tiered weapon progression and isn’t afraid to hold back punches by throwing tough opponents into awkward situations. Fat Commanders blast their way inside small spaces forcing a close quarter fight, or an introduction to bullet resistant variants of the Protector Drones (called Grinch Newbeasts), suggest a couple of instances. Each encounter respects that players will seek out alternative measures around their environment alongside the weaponry on hand to help win them the battle. Access to a larger portion of town is later granted that encircles the entire layout with the goal pointing to gaining entry into the power station through a series of sequential key card hunts where the main alien menace seem to be gathering. Freedom to venture off exploring the entire outdoor section, accessed from either end of the main road, provides an opportunity to gather up necessary supplies scattered along side paths and other points of interest, all while chipping down a strong enemy presence guarding these areas. Choosing not to engage these foes and heading straight for the next key is also an option, but one that may suffer consequential harassment from street level opposition increasing the difficulty when required to balance the power lines without interruption. 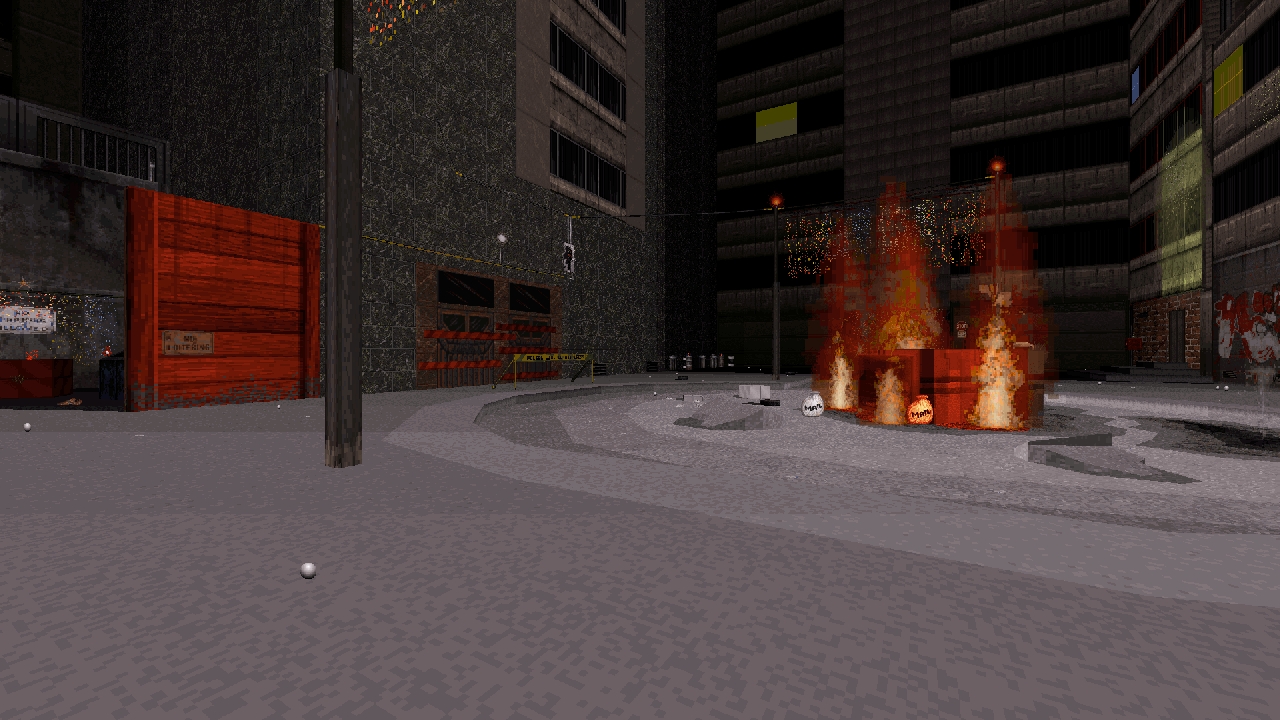 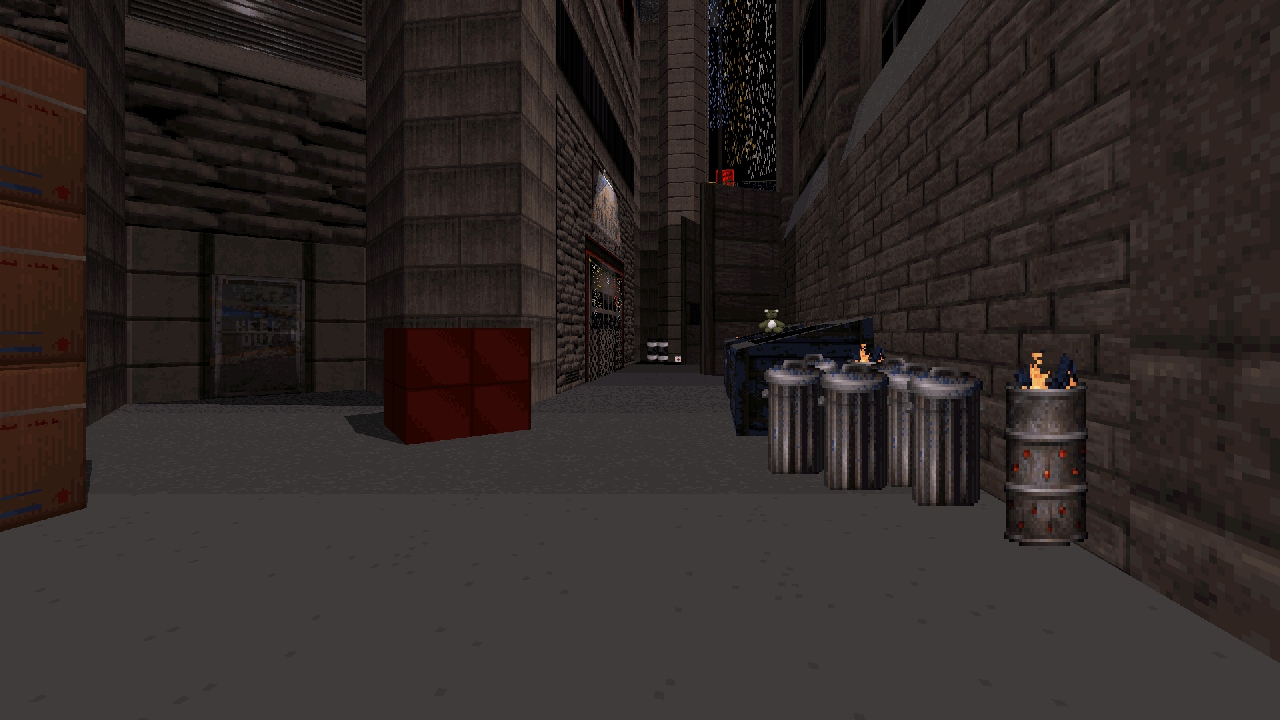 Because the enemies aren’t simply drip fed in a standard manner, numerous compositions could be confronted at any given moment telling players they should always be ready to respond accordingly as early as the starting encounter. Fodder are often positioned to attack from multiple angles opening up for bombardment from down the road, all while being shot from the skies by those able to exploit that space. Almost every alien type makes their presence known, inflating their numbers as the level grows with intensity. Combat becomes a frantic battle of awareness that rewards an agile and perceptive fighter by gaining full control over the central hub for some peace of mind. But Duke’s opponents have grown weary themselves, hiding many other tricks up their sleeves that include devious traps to imbue caution when exploring new locations as every scenario behind a card locked door ends up playing differently to the last. Once all tasks are said and done, a map wide finale erupts for one last tour of the city to secure last minute supplies while under constant threat of rockets raining from above. 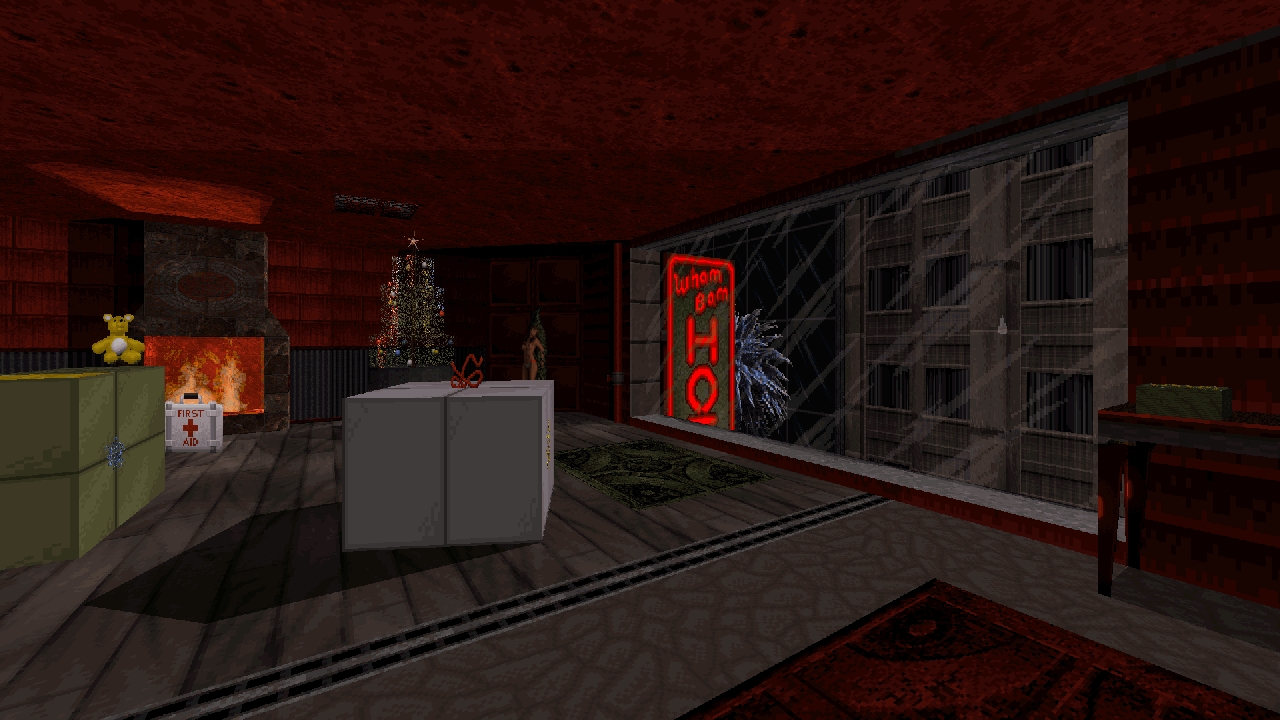 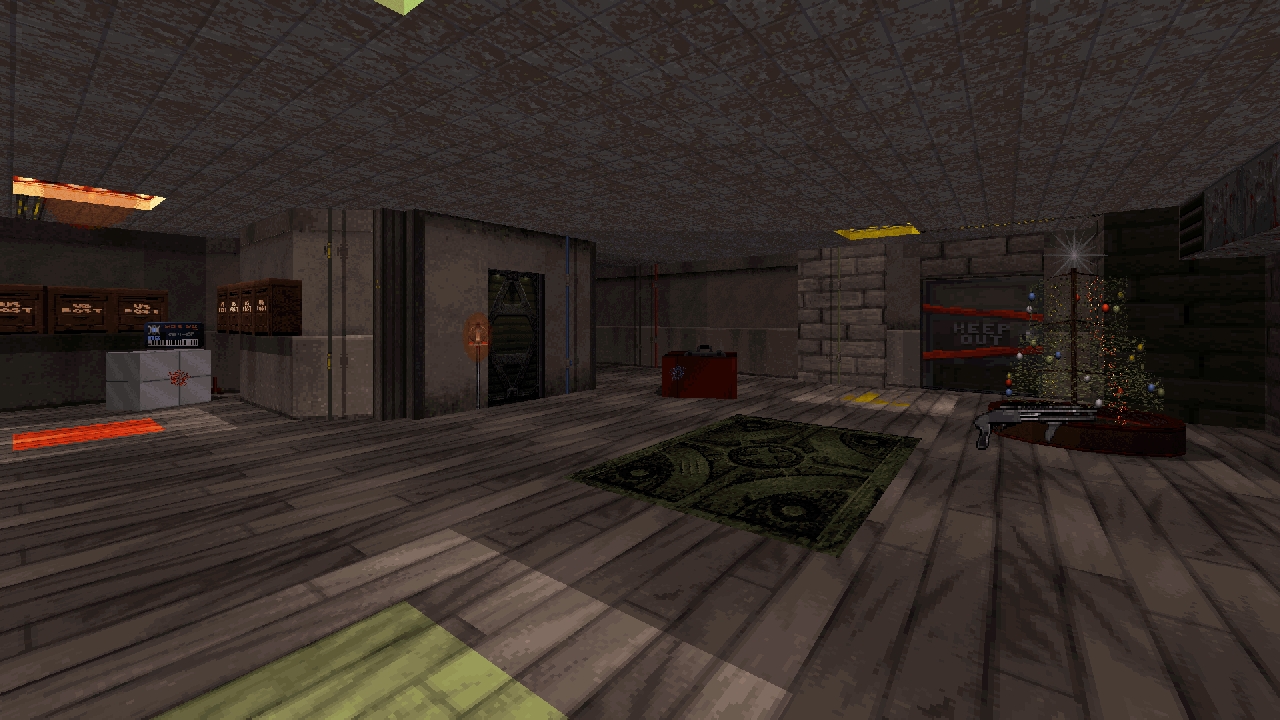 Two specific motifs have a significant role in regards to visual design that accentuates the major themes across POISON HEART, achieving a meaningful purpose and careful attention to detail when seen as a whole. Christmas is one particular thematic motif that surprisingly manages to avoid being tied entirely to that seasonal holiday, where design offers enough alternative highlights to stand well enough on its own feet. Suitable baubles are used to decorate the entire level from Christmas trees and wrapped presents, to small lights hanging from wires colouring nearby walls with their hued luminance. The second motif comes from its intricate cable work connecting electrical appliances to power sources. These two then go hand in hand with power consumption creating a secondary theme, where upon activating appliances or machines that require electricity often attracts the attention of enemies, therefore providing a reasonable explanation as to why the power station could be an integral area. Other times it’s simply played for laughs; the treadmill apartment room. The design does occasionally stumble when taking gameplay into consideration. Glares placed on switches had me mistaken them as part of the Christmas motifs littered across the map. Interiors taking on more claustrophobic liberties versus the spacious outdoor segments can offer some effective spice to an area, but blunder when the positions of furnishings interrupt movement.

POISON HEART might come across as another standard romp through familiar urban themes, but excels at surprising even seasoned players by throwing them into several gauntlets with nothing but their boots and expects more than brain dead, trigger fingers to conquer its streets. Combat is tense, avoiding a tired trend of tiered weapon or enemy progression and offers varied means of traversing through its layers of brick to meet these encounters head on.