Duke finds himself heavily roused from slumber. Outside, thick clouds continue showcasing their many grey hues but at least the raining has stopped. What happened just now? It felt as if the entire building were shaking… an earthquake? As far as Duke knew, Europe didn’t have any major fault lines. Not a moment later the room began to violently rattle again, but this time it didn’t stop…

APOCALLASPE starts off with strong impressions pointing our view toward a city horizon which soon crumbles apart as an earthquake shakes with might, buildings topple over and the very ground they stood on receeds further beneath our sight. From here the level’s core theme is presented following the mass destruction that awaits players going forward. Standing around to witness this feat lead to a few quick deaths, too mesmerised, wanting to re-watch that sequence several times from a technical standpoint before acknowledging the room Duke had booked for the night also takes its turn for the worst. There’s a constant air of urgency retreating forward without time to look back, invoking a thrilling rush of quick thinking to keep moving ahead of danger. For other this sequence may be frustrating if one finds themselves being repeatedly crushed beneath the rubble unable to keep up. Once a certain milestone is achieved the situation calms down allowing players to move at their own pace here on out to grab some gear, tackle a few stray aliens before emerging from the rubble to see first hand how much destruction the disaster had caused the city of Emmerichville. 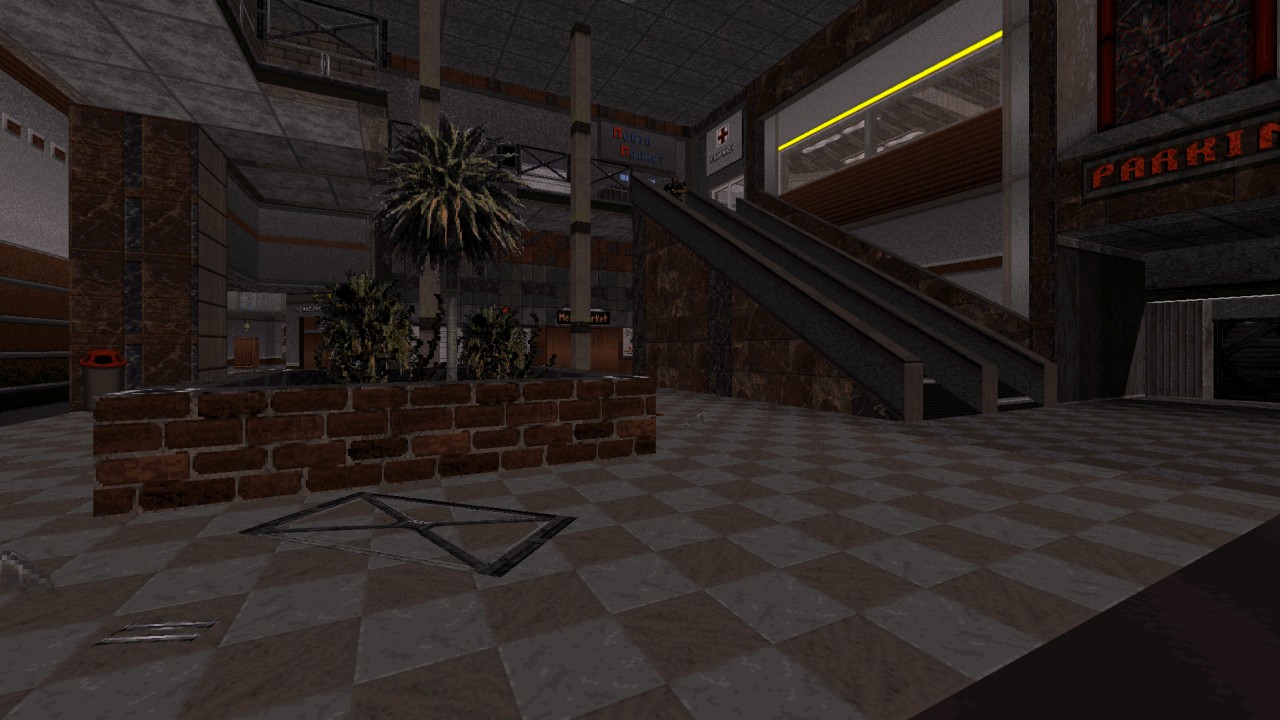 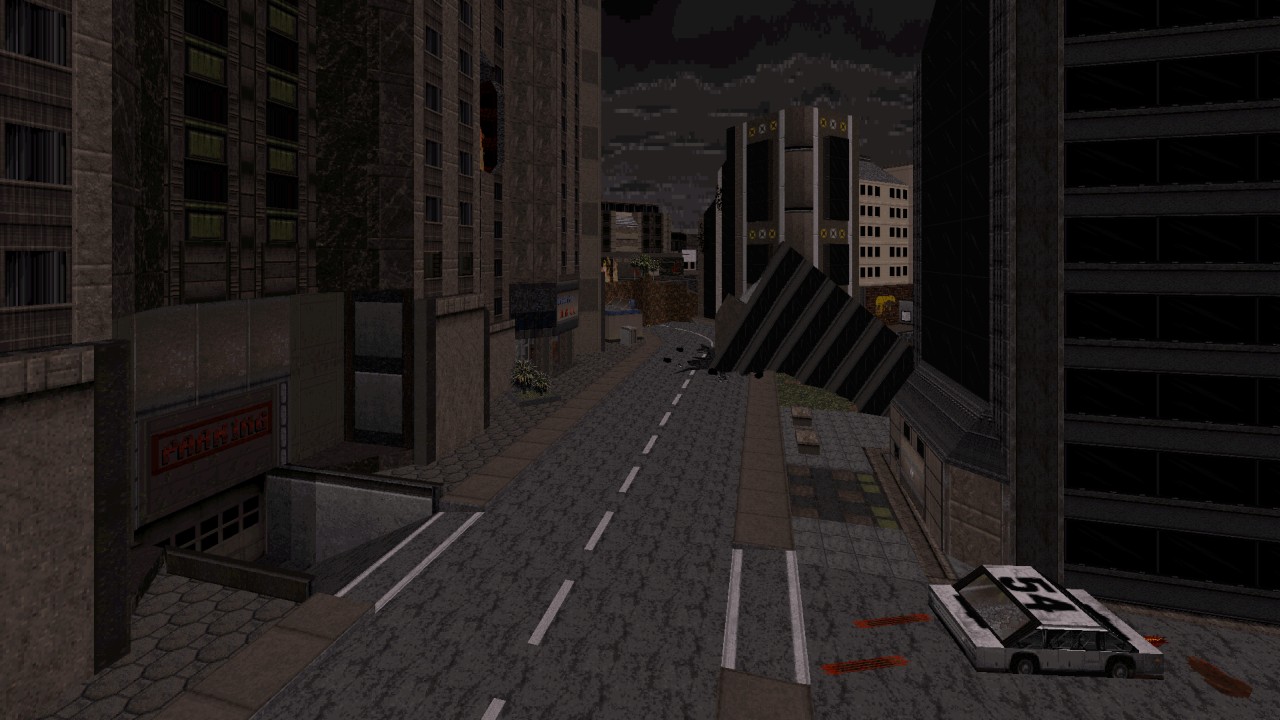 Now nothing but a mere shadow of its former self, these malformed city streets become our next playing field where large sections are now split apart, roads ending at cliffhangers, chasms dropping straight into scorching lava pits between their seams, separating districts into their own pocket islands. Players are expected to navigate through the aftermath to not only discover what exactly happened, but how to prevent any further wreckage from occurring. APOCOLLAPSE pacing is very segmented into clearly defined chunks, introducing one section with a particular goal in mind, eventually reaching a climatic note once that path is forged before tapering off a sense of closure before moving onward, never turning to look back. Once outside an invitation to explore is granted to locate possible routes leading toward Duke’s goal or snatch up other hidden treats to stock up for incoming fights. Aliens litter what remains of Emmerichville perhaps cleaning up what remains of its surviving populace, sweeping each area in pursuit for our tenacious hero. Any lead getting closer to “The Komplex” is met with further retaliation from heavier forces. 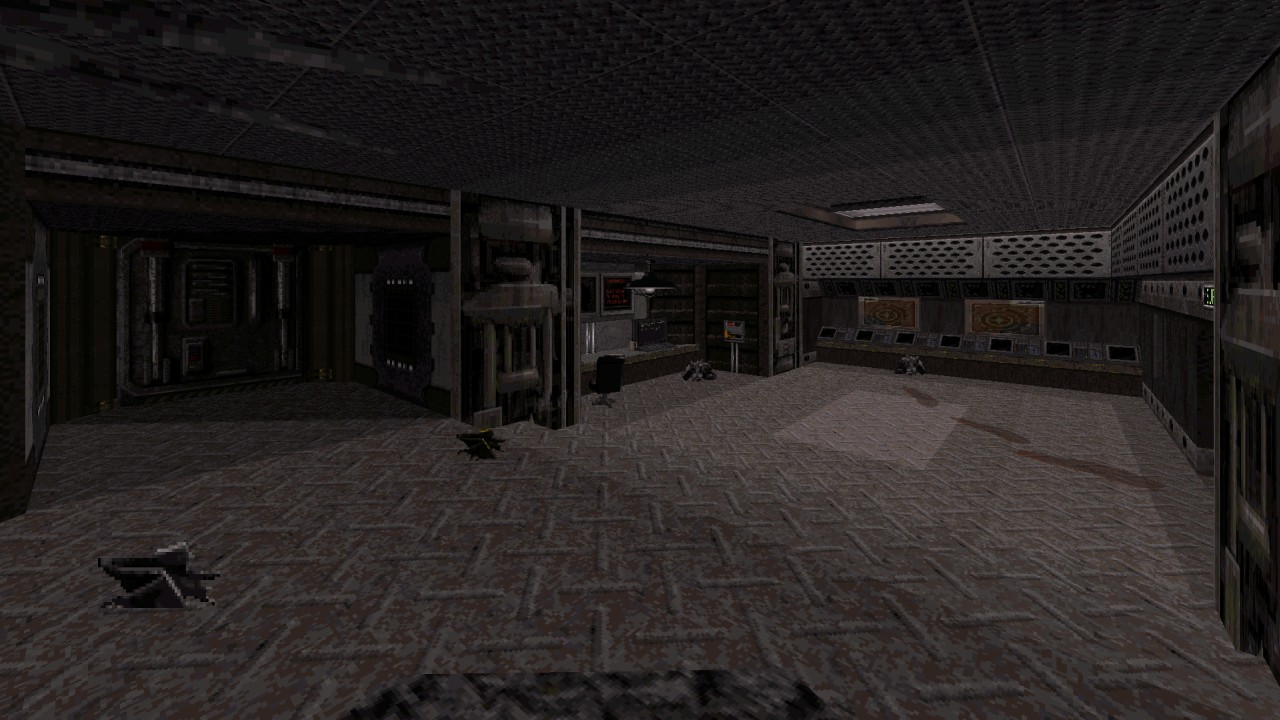 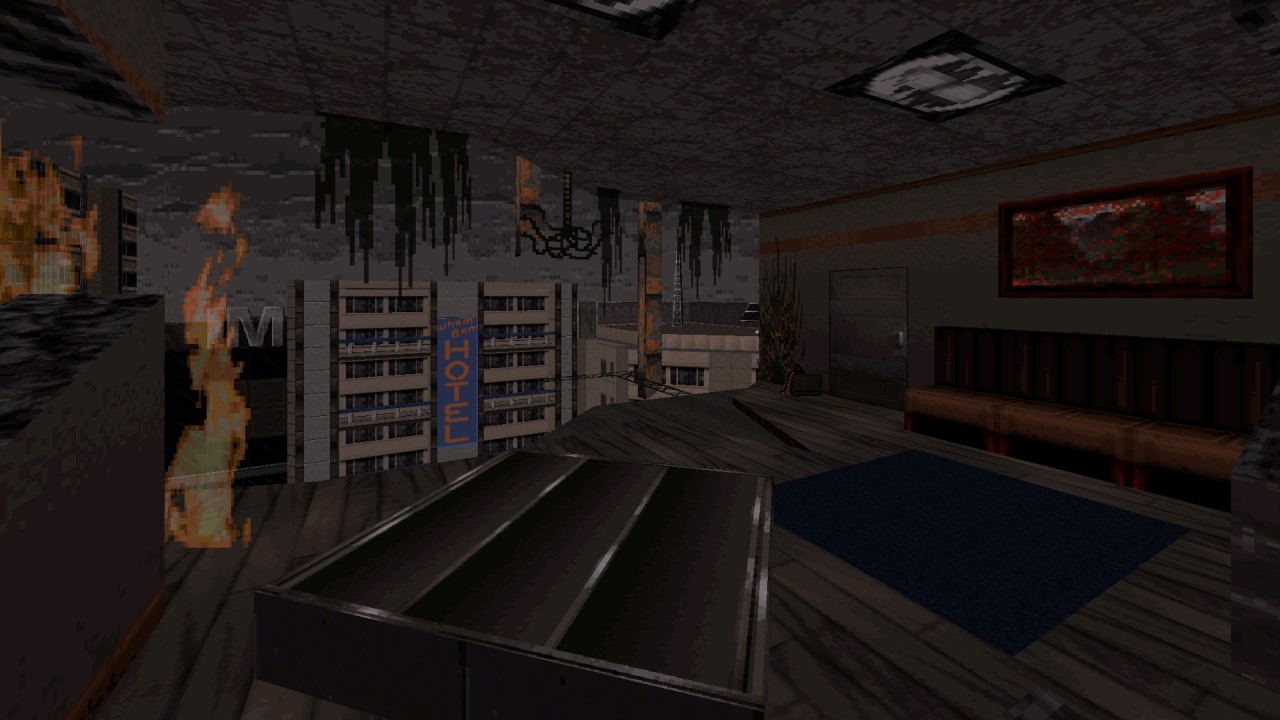 Combat doesn’t throw many curve balls focusing its action primarily using handfuls of units at a time, all of whom can be dealt with using range to an advantage. Munitions are plentiful, provided for a wide selection of tools. Snatching up a Freezethrower and RPG provides an overwhelming advantage early on, but in time it becomes apparent health supplies are frugal by comparison. Troopers dominate the street side utilising their own advantages via flight, shooting from long distances which is prevalent during one particular rooftop battle. Pigcops also lurk around corners awaiting those surprise attacks to whittle away precious health meaning every piece of cover will become a vital source of protection. Other highlights also include the use of Battlelords to harass from midrange provoking some nasty mortar barrages, an underground parking lot skirmish and a finale battle involving delayed enemy spawns to spread out the action. Most of my trouble was bundled up during this last encounter, both playthroughs forcing me to retreat and pick off targets instead. Fights are manageable without too much trouble with a shotgun ammo surplus to fall back on if in a pinch. 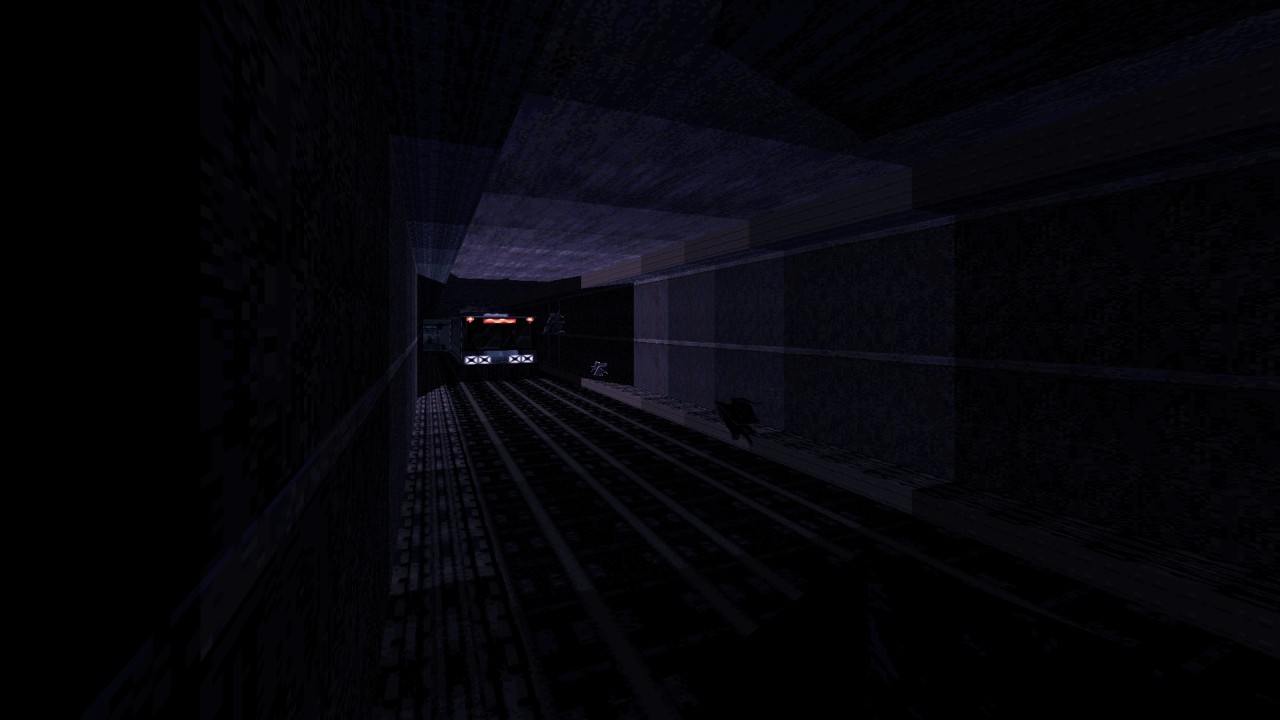 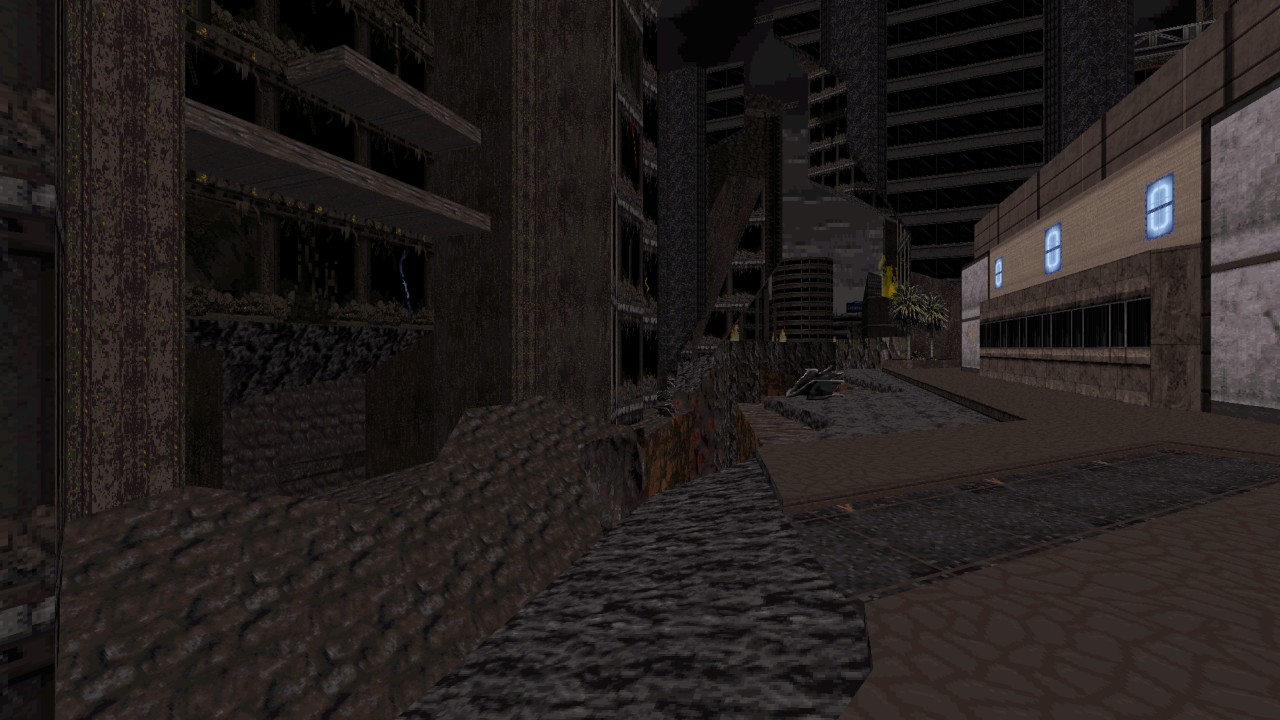 APOCOLLAPSE from a visual standpoint cannot be simply summed up as a georgous looking level with an attention for detail. Merlijn takes these thematic choices further by incorporating its very design as key parts for gameplay and storytelling. Navigating through Emmerichville is already unnatural for a city environment due to its degree of destruction, leavings streets blocked off in exaggerated yet believable methods meaning pathways must be forged where they can be found; ascending broken buildings or crawling between debris. Familiar locations as we would typically recognise them in reality are twisted, buildings torn into two hanging by threads over fissures, a shopping mall broken into pieces, entire inaccessible districts emphasis the damage exceeding beyond what players themselves will traverse through. Until the sequels of course. High visibility, grey clouds and an overall monotonous outdoor lighting style further embraces the scenario’s macabre tone well. Accompanied for the ride is an original music track fitting the level like a glove. An unsettling set of mixed rhythms creeping steadily into an otherwise dark ambient tune brings out a sense of desolation, uncertain what awaits us in the future, but a strained guitar melody manages to crawl from beneath the rubble suggesting that not all hope is lost – Duke still lives. Having experienced APOCALLAPSE with this track it wouldn’t feel a complete package without it.

APOCOLLASPE is the first within a series of levels taking full advantage of its thematic choice, from its stunning opening sequence and georgous representation of city destruction, down to the very layout having players navigate its winding streets and buildings through unnatural means while avoiding the ever present dangers lurking ahead. Merlijn offers a fantastic twist to the rather typical city theme, soaked with an ambience of despair and includes an excellent original music track that feels at home.