BSTEIN starts off with a skill selection zone but it doesn’t quite remain limited to that. Players have an opportunity to dive into exploration right off the bat and discover a variety of extra goodies before jumping toward the main journey. Having played this both on Normal and Hard I can say they do have quite different experiences in store for either one. Normal was an enjoyable romp that doesn’t quite put players on edge, yet even having gone through this once already there were still many surprises in store during my Hard run. Personal preference leans toward the latter difficulty because enemy encounters are more dangerous, with higher numbers, and therefore encourages use of nearby traps to turn the tables and saving ammunition in the process. Not that ammo is entirely lacking mind you and having used a mixture of traps, infighting and lots of axing, I still had truckloads to spare upon completion. Speaking about the end, and I feel this is worth mentioning to get out the way, a rare bug could occur which prevented map completion when a final set of doors wouldn’t open after the second crusher fight. It only happened once during my Normal game while others haven’t reported similar problems and the likelihood of this happening should be very low hopefully. 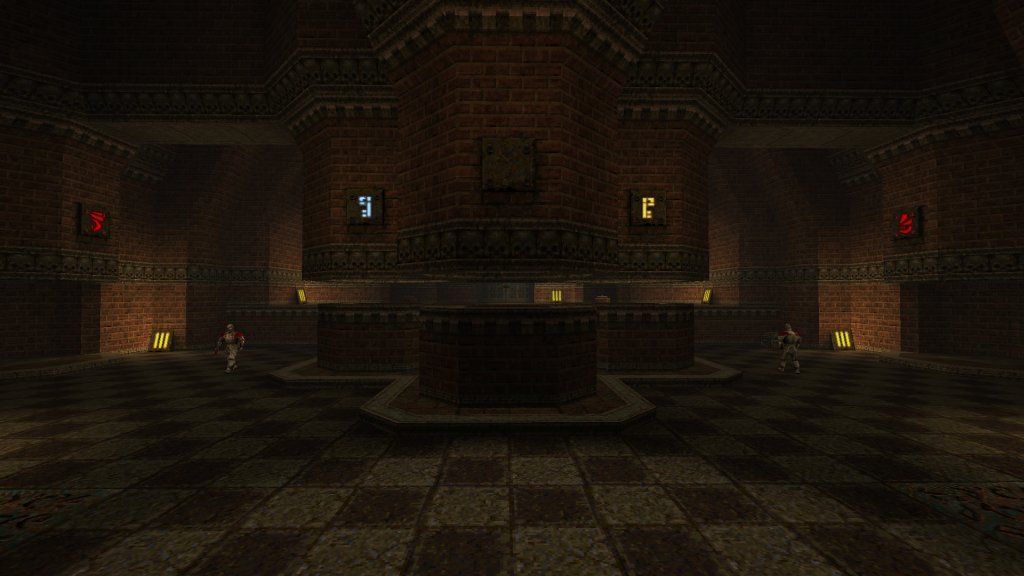 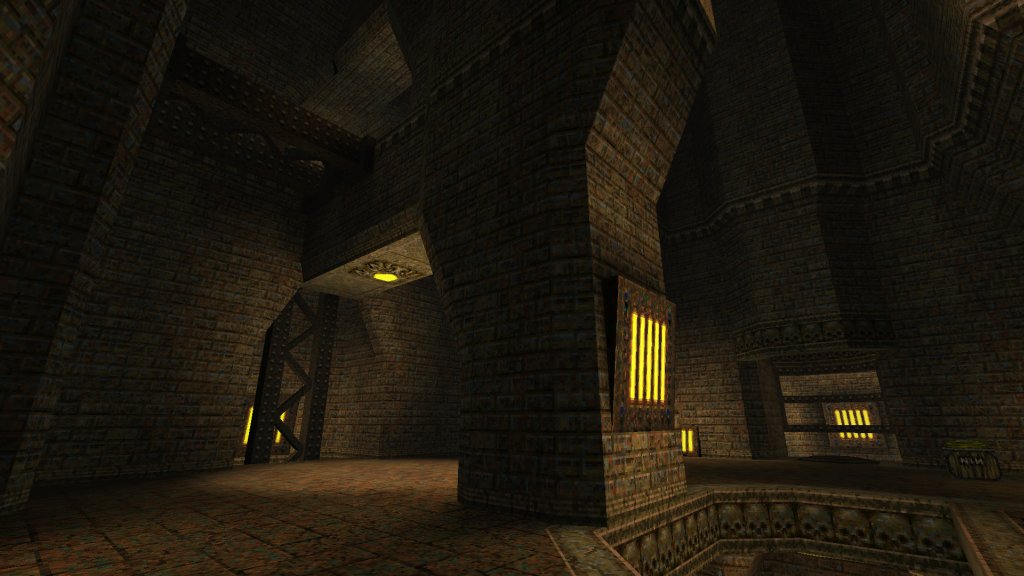 Progression is fairly linear and straightforward on easier difficulties with the Silver Key wind tunnel being a primary access point before the Gold Key route is opened up. Hard otherwise allows either of these tunnels to be chosen and starting with the latter will unlock ‘Hard+’ which is designed for people who want a challenge and not have certain powerful weapons helping them out here. Gameplay as a whole is well varied and considering a large chunk of enemies are not already on the field, it can persuade players to be mindful of their surroundings and actions. Opponents will not always simply warp in however, Sock effectively keeps his chosen theme in mind by playing around with assigning certain wind tunnels to have foes jump out from, slowly filling up a room which could make moving around trickier to pull off without getting cornered. There were plenty of other thrilling encounters and scenarios I hadn’t quite expected at the time and have caught me off guard a few times. Traps are incredibly effective on Hard, originally having ignored most of them during my initial run, they make for a good laugh when a onslaught comes rushing into a nail shooter or splattering into showering gibs. Makes for a nice change to have enemies fear traps instead of players taking the role of victim. Unless you’re like me and walk into a nail shooter half asleep. The finale crusher battle was an excellent and enjoyable way to round off this experience and kept things entertaining against oncoming hordes. 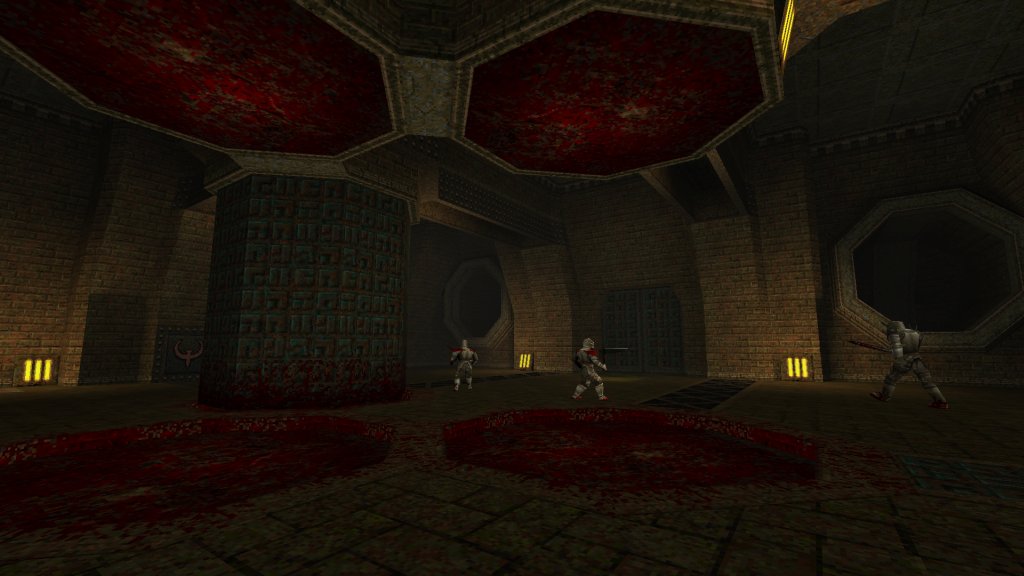 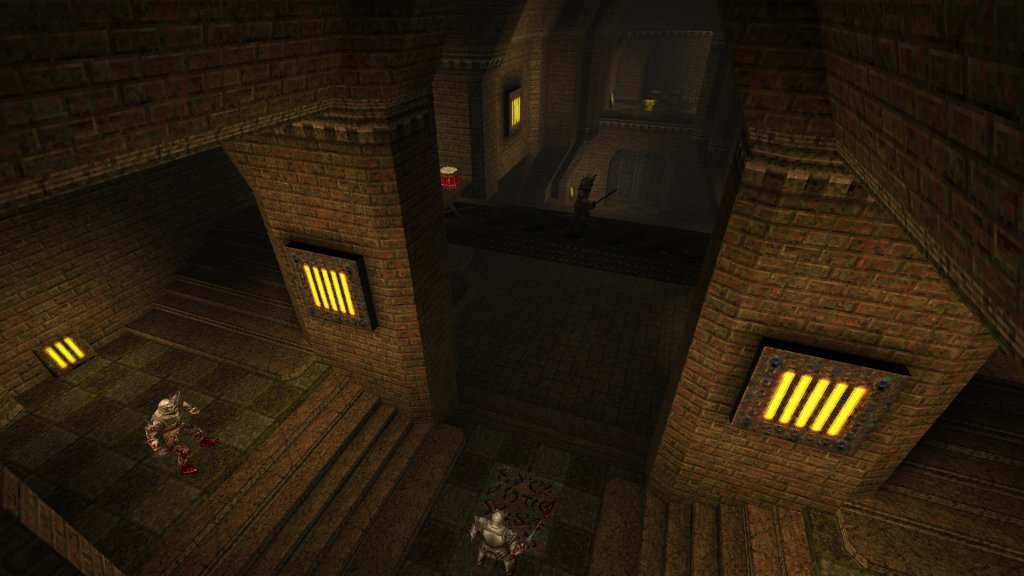 BSTEIN uses a number of consistent and clear visuals cues to help point out certain gameplay elements across the level so that upon seeing them again, players should understand what they are suggesting. Two examples of this include; Those demonic faces that are rarely seen on walls meaning that a secret entrance lies behind with a switch nearby; Or the flashing rune floor panels indicating a touchplate that will very likely cause something to occur. Wind tunnels also share something like this and one small detail I especially liked is when an inactive wind tunnel becomes active, shown dynamically through environment changes by replacing the flooring with a circular air vent like many others. It might be a very simple detail but does a huge amount for immersion actually. Secret switches are neither neglected in this list in which they all share a similar appearance, providing players with an idea where they could look out for them and recognise them quickly once one is found. Searching for secrets becomes an engaging and rewarding activity where many are well hidden, such as an early shotgun barrier perhaps being the trickiest one I had opening for a long while. 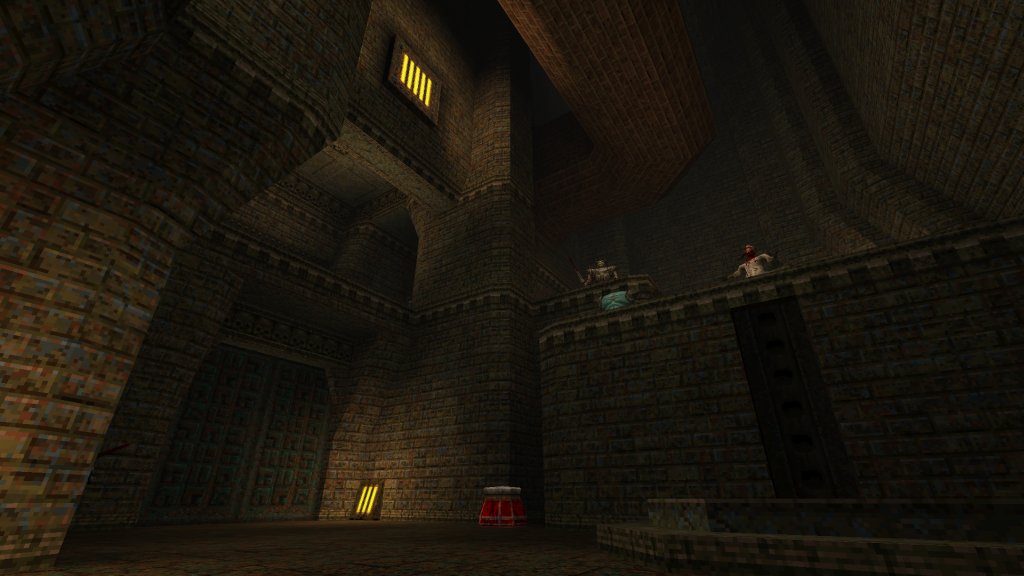 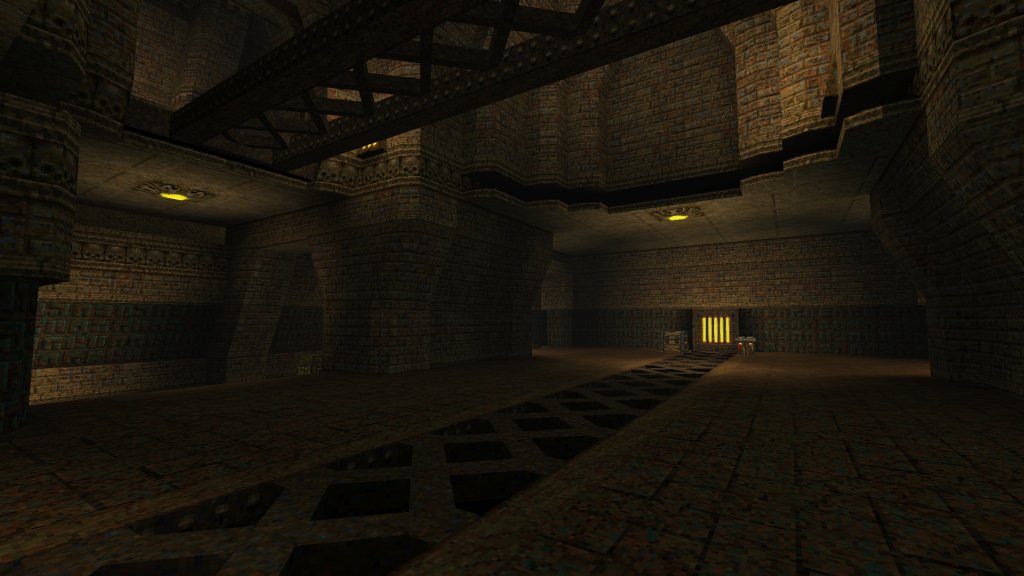 Layout and structuring offers a smooth flow from one section to another, a combination of height variation with lifts and some areas connected up with multiple entrances to flank enemies or retreat through. Wind tunnels help to split sections apart from one another to get a better sense of progression as well as having self contained fragments that need completing. Geometry is clean yet very angular to avoid having flat bare walls and creates depth in place of shadows since lighting tends to fill up an entire room. Texture choices don’t stray far from brickwork, either a clean orange variety or dusty gray. Such a significant texture scheme can become monotonous over time though, regardless of visuals being of a high standard, but attempts have been made to break things up with various structural details along the ceilings, differing floor textures based on height and the occasional bloodied metal amongst others. Having a few smaller sections using a different texture scheme might have helped, perhaps by exploring the inner workings for mechanics or air flow using a metal scheme. 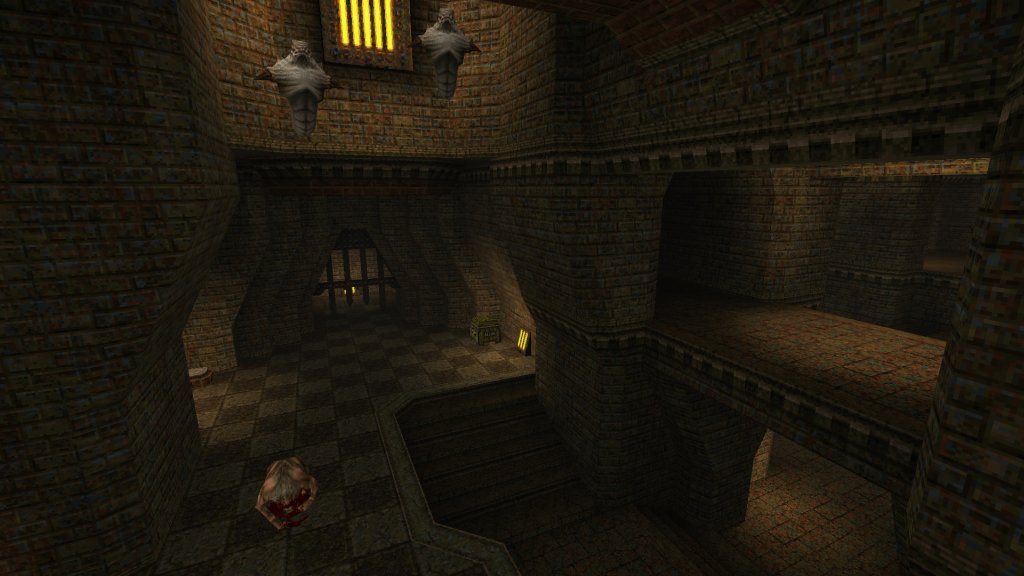 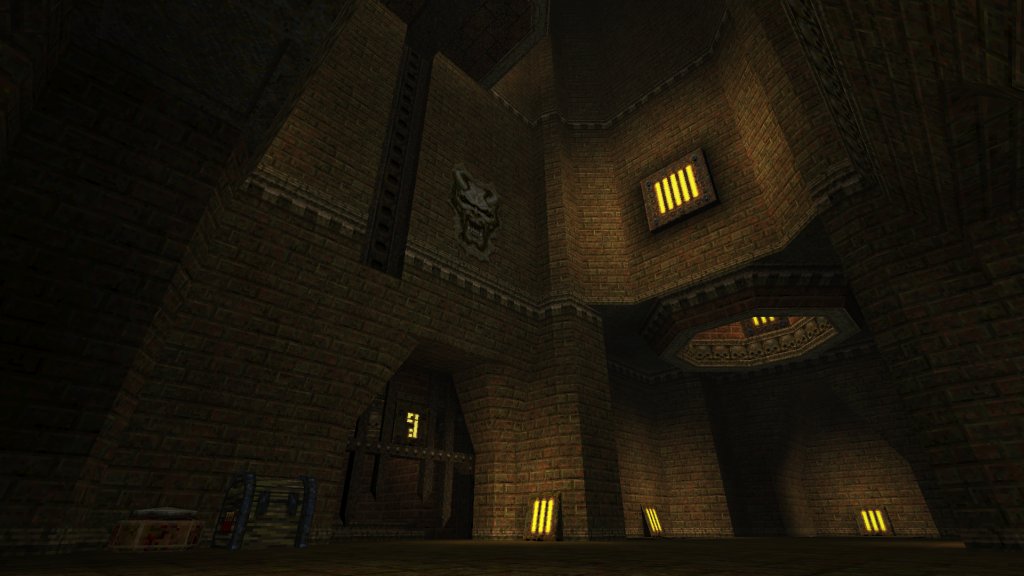 In addition to aesthetics, replacement models for ammo and health items have been included to fit the Gothic style suitably. They appear good looking and clearly represent items well, with large red flasks for health and wooden chests with ammo type etched along the side. Visual design as a whole is done in such a way where you want to look upward often, following the tall architecture before it disappears into the fog beyond several large pipes connected between walls to make the environment appear vast and interconnected. This style is also a clever approach to teaching players to look around the vertical space while exploring and admiring scenery details, maybe even coming across a secret button in the meanwhile. Too bad that combat doesn’t make more extreme use of the amount of vertical space besides from Scrags and perhaps one of the Shamblers. It’s not like enemies don’t appear on higher ledges though, but can still be uncommon enough of a sight with most action being focused on ground level with easy access to traps. I wouldn’t say this is a fault of the map, just an observation really, but it might have been eerie seeing some Scrags or other enemies emerging from behind the fog.

Challenging and varied, BSTEIN offers some entertaining and well paced combat scenarios while keeping players on edge. Progression between areas flow smoothly and secrets are engaging to hunt for. All of this is rounded off with an excellent design and a brickwork visual style unqiue to the wind tunnels theme.